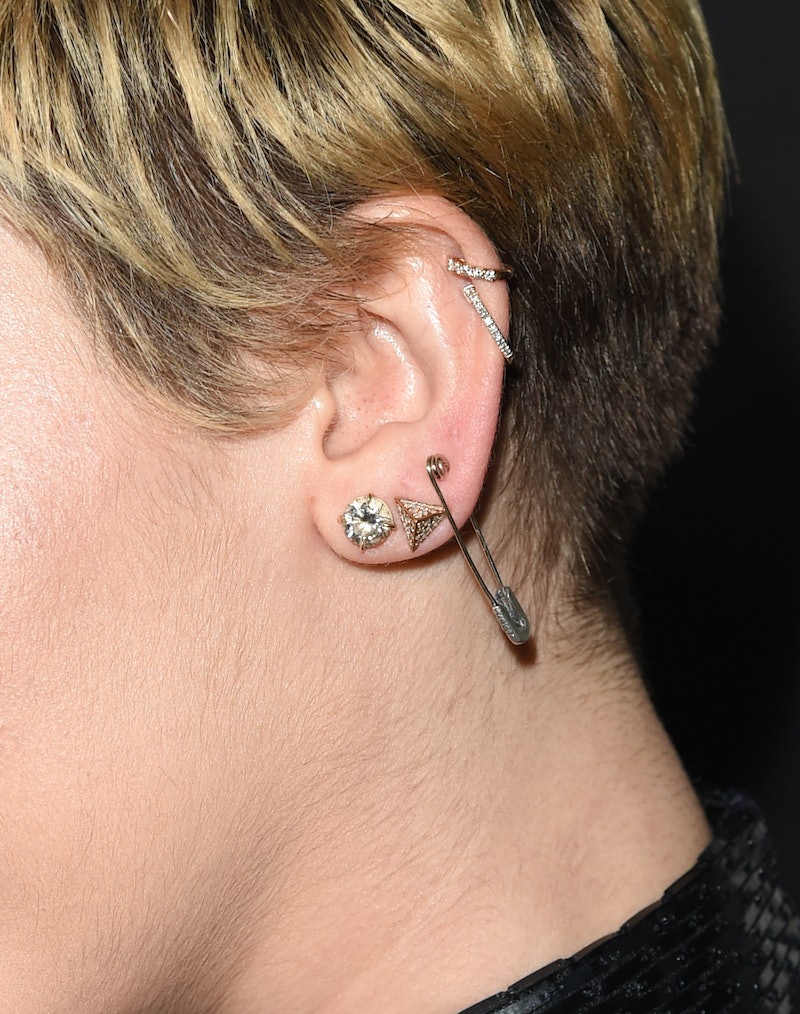 Got a safety pin? Been seeing them everywhere and not entirely sure what they mean? The safety pin phenomenon hit Britain first; in the wake of the Brexit vote in June 2016, in which Britain voted to leave the European Union, racist incidents spiked, and people vowed to "wear them as a public symbol to show solidarity with immigrants," as The Guardian reported at the time. After President-elect Donald Trump's victory, the idea made its way to the United States, and it's understandable why. With swastikas turning up as graffiti and school teachers reportedly taunting their students about being deported, it's a volatile environment in which privileged allies feel the need to show that they stand unquestionably with immigrants, people of color, the LGBTQ community, transgender people, and others who are being threatened and harassed. But are safety pins enough? And what does wearing one actually mean?

Safety pins are now encountering a backlash; the Washington Post called them "an emblem of white guilt," and people are mocking jewelry designers who hopped on the bandwagon to sell elite safety pin pieces for huge amounts of money that could otherwise go to social causes. There's a more pressing issue underneath this flurry, though: in this environment, safety pins should perhaps do more than indicate "I am a safe person," or demonstrate your social awareness. A persuasive perspective argues that they should in fact stand for action, and indicate people who are willing to step in to help when harassment and abuse actually take place.

Bustle talked to Isobel DeBrujah, a US Air Force veteran and social justice organizer with training in criminal justice and psychology whose post, "So You Want To Wear A Safety Pin," went viral, about the responsibilities of performative support and what it really means to wear a safety pin in public.

The pushback against safety pins is pretty simple: it's centered on the worry that a symbol pinned to your shirt, powerful though it may be in concept, will not be sufficient to protect people who are facing real violence and harassment in Trump's America. DeBrujah and other critics point out that putting on the safety pin should represent a certain responsibility: if you wear it, you are declaring yourself to be a safe space, a person on whom marginalized communities can rely when sh*t goes down.

"I think it’s a nice idea if, and only if, it is accompanied with a plan of action," DeBrujah tells Bustle. "It’s all too easy to invest in the symbol and ignore the people who are being harmed by the thing you’re wearing the symbol to protest. It is equally easy to wear a symbol of support and neglect to involve yourself in actual support."

This is often the downfall of big, symbolic gestures of support. People get caught up in waving the flags, or putting up the posters, or buying safety pin brooches in chic gold with diamonds, and believe that's sufficient: they've said they're supportive, and that's that. The problem is that support in these contexts is a lot more helpful if it's active, and for the sake of the people who are being targeted, not just to show how forward-thinking and excellent you are as a person.

So what is a safety pin good for? According to DeBrujah, it's "a sign that the wearer is willing to step forward and actively help." You're declaring that you will not look at your phone when somebody yells about Trump as a justification for hatred, or keep silent when somebody harasses a woman wearing a hijab, or do nothing when a person makes "jokes" about deporting somebody else.

And she also makes the salient point that a safety pin wearer can't just stand and wait for people in trouble to come to them: "It’s too much to ask someone who already feels threatened to find a tiny pin on a piece of outerwear, judge whether the person wearing it really means that they are willing to get involved and then attempt to move toward the person wearing the pin." A safety pin is not a beacon, and you are not a lighthouse. It's more like the symbol on an armed guard's epaulette: if there's a situation, I'm going to help in an active way, rather than standing back or aiding the aggressors.

How To Make Yourself Into A Safety-Pin Ally

The step from "I'm willing to be an ally" to doing anything actually helpful in a tense or threatening situation can be a vast one, which is why so many people prefer to keep things on the symbolic level. But with enough preparation, you can make yourself into a safety-pin ally with good and effective responses to harassment and abuse.

DeBrujah, who's outlined many ways in which people can plan to help in conflicts, from figuring out how to de-escalate to knowing your own limits, highlights the crucial importance of planning. "Anyone who wants to get involved needs to have a fairly concrete idea of what they are willing to do before the actual event," she says. Are you willing and able to try and calm people down? To step in and form a human barrier? What about your friends or your partner? Do they know what they'd do in the same situation with you? "Without a plan, someone trying to assist a marginalized person can find themselves fading back at a crucial moment," DeBrujah advises. If you're going to wear a safety pin, you need to try and prepare yourself for what might happen.

Debrujah's advice on how to get yourself ready: research, research, research. She recommends Googling de-escalation techniques, one of the most important of which has been included above. And, crucially, she points out that "the views and voices of the marginalized who are talking about this issue" need to be the people you reach out to for advice from first; what they want to happen in situations where they're threatened, and how they would like to be treated. She uses calling the police as an example: many safety-pin wearers, being privileged people, will likely think 999 is a good idea, but it often isn't the first preference of the people being attacked.

Note that a lot of de-escalation techniques available online tend to focus on engaging with the aggressor, doing things like controlling your body language and asking for their solutions. This may often not be the best way to de-escalate a situation in which somebody is being abusive; The Guardian , for example, points out that filming or recording the abuse and reaching out to the person being harassed should be your first points of action, as "intervention could escalate the situation". Australian psychologists, explaining what to do in the wake of a spate of racist incidents against an Aboriginal Australian footballer, noted, "Remember that any challenge to someone who is being racist is likely to be more productive if it’s done without overt anger. Anger can be misinterpreted as aggression and may provoke hostility, inadvertently producing an unsafe situation."

Here are a few things you should not do. One: fighting if you don't have a clue how. If you don't actually know self-defense or have decent training, you'll risk serious injury. "Most people should not even attempt to do that," DeBrujah notes. De-escalation, in which you "engage the marginalized person in a friendly, compassionate manner," should be your go-to, because "that behavior risks little and directly parallels and combats the negativity of the aggressor."

Three: ignoring whoever is actually being abused, and doing what you think is best. That won't make anybody feel safer or more respected, and will likely just make things worse. "The person wearing the pin should allow themselves to be led by the marginalized person," DeBrujah says. "If the marginalized person isn’t interested in engaging then the person wearing the pin should sit quietly."

What If You Can't Help The Way You'd Like?

If you're coming out of this thinking that the demands on a safety-pin wearer are high, you're right. And there are some of us who, despite our best intentions, may not be able to step up in effective ways in safety-pin situations; maybe we always have kids with us, or have severe PTSD or anxiety, or are physically disabled. However, there are always steps to be taken.

"Everyone can do something," says DeBrujah. "They can document. If the situation is too much for them to engage the marginalized person they can have a loud conversation with a friend or even a fake person on the phone about the situation. There are a huge number of things that a person can do without bringing themselves to mental, emotional or physical harm, which is always a possibility in situations like this." Keep your phone's camera on video mode, and remember that just asking if somebody is OK is an act of help.

The take-away? It's not all abstract demonstrations of solidarity; the safety pin is a real demonstration of a real commitment, and like all commitments, it can be tough. "Actual support takes work," DeBrujah says. "It’s difficult, isn’t slow, it’s very often boring, and there are few if any accolades or emotional payoffs. It’s just work; but work that is absolutely necessary so we can build a society that conforms to the most basic definitions of decency and humanity." If you're ready to do it, wear your safety pin with pride.

You can find more from Isobel DeBrujah on Facebook or on her blog.