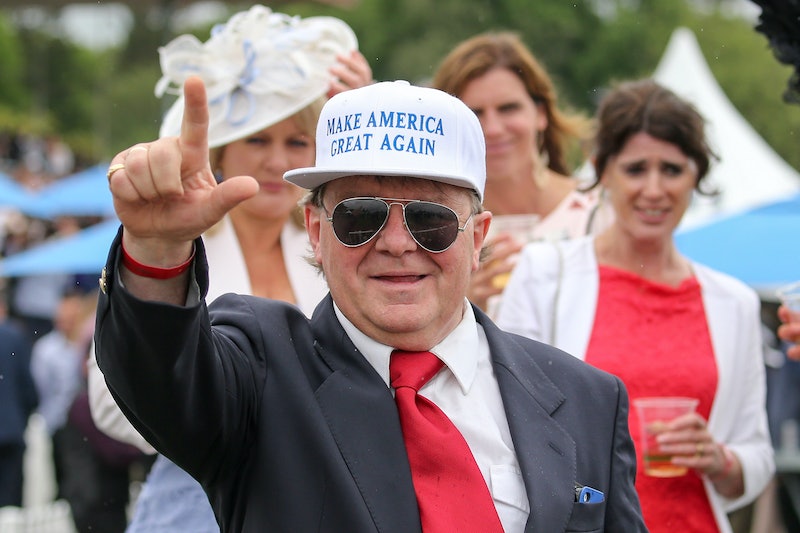 It's the word George Orwell didn't live long enough to conjure up himself: "post-truth." That's 2016's "Word of the Year," as decided by Oxford Dictionaries. And if you've been even an occasional observer of politics during 2016, you know the Oxford editors who named "post-truth" the top word got it right.

Oxford Dictionaries' definition of "post-truth" reads: "Relating to or denoting circumstances in which objective facts are less influential in shaping public opinion than appeals to emotion and personal belief." The word reportedly first appeared in 1992 in an essay for The Nation magazine. Post-truth being taken to mean, in this context, a reality in which objective facts no longer hold primary sway.

A quick glance at PolitiFact backs up this post-truth moment. During the 2016 election campaign, Donald Trump decimated previous notions of an "acceptable" amount of political fact-bending. A trifling 4 percent of his public statements earn the "True" rating. That a full 68 percent of his remarks fall between "Half-True" and simply "False" would be shocking enough, except that a staggering 17 percent earn the full-out, bold-faced lie "Pants On Fire" mark. If there were a class called "Making Wild and False Statements," Trump would breeze through with about a B+, and that's without really trying. This man is now president-elect.

According to Katherine Martin, "post-truth" was selected as Word of the Year prior to the presidential election. The head of Oxford dictionaries' U.S. division, Martin said the Word of the Year is chosen for its ability to exemplify the “ethos, mood or preoccupations of that particular year and to have lasting potential as a word of cultural significance.” Google searches for "post-truth" skyrocketed over the summer, as Britain voted in favor of Brexit, stunning the world with their decision to leave the European Union. In the United States, Trump's entrance into the presidential race caused an American surge of "post-truth" usage, suggesting that many recognize the wave of political appeals to emotion and nostalgia in lieu of facts.

In his seminal novel 1984, Orwell described the practices of "doublethink" and "Newspeak." Citizens of the dystopian Oceania are required to both understand that what the media reports is a lie, but simultaneously accept it as the "new truth." When Salena Zito reported in September on the difference between Trump supporters and skeptics, she put it this way: "The press takes him literally, but not seriously; his supporters take him seriously, but not literally." That strikes me as significantly Orwellian, and a perfect example of "post-truth."

Zito's remarks suggest that Trump supporters believe he will take care of immigration, but perhaps not build his promised wall or follow through on deporting 11 million people. They believe he will bring back jobs, though they'd probably scoff at the reality of starting a trade war. Trump's fans think he can handle the POTUS job, and thus excuse his bombastic rhetoric and outlandish promises as just for show, or perhaps simply not that important.

Trump's going to build a wall. But not really, he's just going to take care of our immigration. Trump's going to torture terrorists. They're probably doing it already. Or maybe they aren't, but he will. Or he won't, but that doesn't matter. Because actually, he's just going to rid the world of terrorists altogether. This type of thinking is regularly on display by Trump himself. Take this direct quote, noted by CBS news reporter, Sopan Deb:

But the importance of Trump's promises depends on who you ask. Take William Daniel Johnson, who belongs to the American Freedom Party. The white nationalist group wants minorities out, and Johnson has expressed his excitement at Trump's ability to help bring about this new America. He says that whites have been "despised" by recent administrations. Clearly, Trump's willingness to tolerate racism and spout it himself is not a matter of campaign tactic, but instead an implicit promise. At least, that's how Johnson hears it.

That is the kind of problematic fallout that having a loose (or in Trump's case, almost nonexistent) relationship to facts can bring about. With the soon-to-be 45th POTUS, America has assuredly entered a post-truth era. Trump was not punished by voters for his constant mendacity, and one assumes how that plays out during Trump's time occupying the White House could permanently change the standards of political discourse going forward.

It's a post-truth new world. And it will take relentless effort to claw our way back to the "normalcy" of holding politicians accountable. Trump voters took that practice for granted at their own peril.