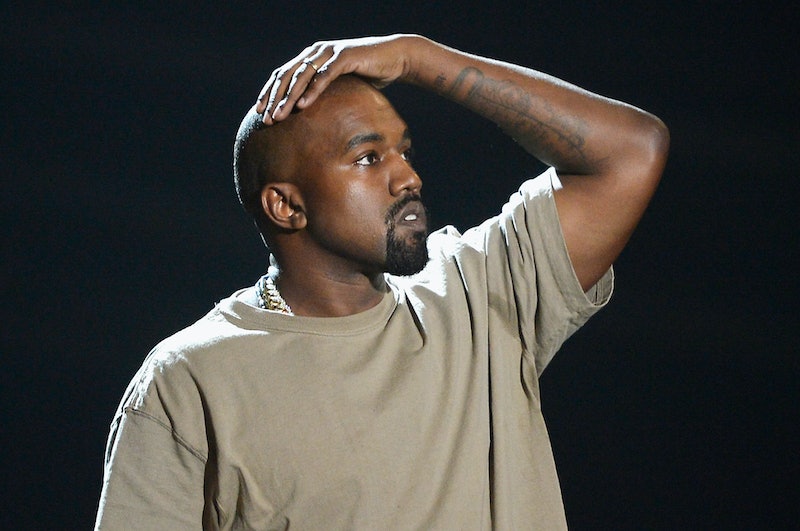 If you already have a list of people you know who didn't vote in the 2016 election, here's another one to add. During a Thursday concert in San Jose, California, for his Saint Pablo Tour, Kanye West said he would have voted for Donald Trump. You know, that is if he had actually taken the time to vote. Yeah, not only did he not exercise his right to vote, but he made quite the declaration in support of Trump. "I told you all I didn’t vote right? … But if I were to have voted, I would have voted for Trump," he told the crowd. West's rep could not be reached for comment at the time of publication.

His controversial remarks didn't stop there, as West added, "Specifically to black people, stop focusing on racism. This world is racist, OK? Let’s stop being distracted…it’s just a f*cking fact, we are in a racist country, period." He also added, "Not one or the other candidate was going to instantly be able to change that, because of [their] views."

As I'm sure you can imagine, most people in attendance did not react positively to West's comments, but mainly when he said Trump would have earned his vote. Of course, concert goers tweeted videos and their own commentary in response. Yes, there were many boos after all the Trump talk, but if you watch the first tweet shared below, you'll also hear some clapping. Well, it sound more like one person clapping, but still.

His political talk didn't stop there, because he then launched into a discussion about his potential 2020 campaign for president. "Kanye just said he thinks he'll have the experience in 2020 to run for office, I'm dead serious, Kanye just said he's preparing for 2020," a concert goer tweeted.

So it seems that West really does want to run for president, which is something he made very clear at the August 2015 MTV Video Music Awards during his Video Vanguard Award speech. "And yes, as you probably could’ve guessed by this moment, I have decided in 2020 to run for president," he said at the VMAs.

According to Politico, West also said the following at the concert about his 2020 run, "I don’t say 2020 because, out of disrespect to our president at all. I’m not saying that, 'Oh man, that just means that anybody can win.' That’s not what I’m saying when I say 2020. I’ve just said I’ve got some ideas about the way we should connect our ideas. That we should use opposite parties. That the republicans, that the democrats, that everyone that ran that had an idea that people agreed with should be the collective ideas that are used to run the country."

Per Politico, he also touched upon how sometimes change, whether you are for it or against it, is necessary for a brighter future. "Sometimes things that you might think are bad need to happen, in order for change to f*cking happen," he told the crowd. "Sometimes you might have to not get your way to really understand what to do in the future, to be able to get your way."

There you have it, he appears to be quite serious about his dreams to become the next leader of the U.S., but until then, fans are probably just trying to come to terms with his political rant, the fact that he didn't even vote, and his support of Trump.