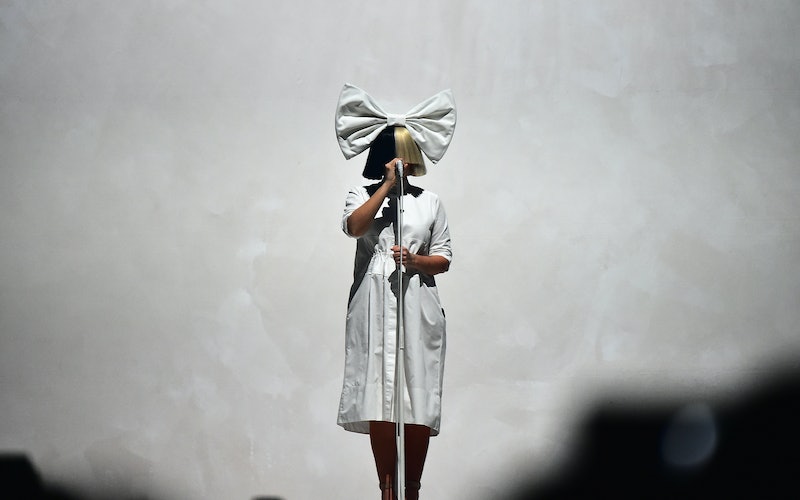 I don't know what kind of magical crystal ball Sia is using that helps her look directly into my soul and see what kind of music I need to hear in that moment, but she clearly has one, because the lyrics to Sia's new song "Never Give Up" are living proof that she's completely tapped into not only where I am in my life at the moment, but where we are as a nation right now. How do you do these things, you lyrical wizard?

"Never Give Up" was written and produced as the crown jewel in the soundtrack for Lion, a movie about a young boy (played by newcomer Sunny Pawar as a child, and Dev Patel as an adult) who is adopted by an Australian family after getting lost in Calcutta, and returns decades later to retrace his steps and locate his family. It's a story of overcoming obstacles and pushing on in the face of certain defeat, and it will be released to theaters on Nov. 25. But the song that anchors the movie, "Never Give Up," was released Friday, and its lyrics are just the inspiration I need, moving into this uncertain political landscape. Even though the song is made for the film, it also somehow seems like Sia just gets me too — let's take a look.

This is literally a description of how I felt waking up on the Wednesday after the election, and how I felt waking up the next day: feeling completely defeated one day, and then moving into action the next. With, of course, frequent repeats of that cycle every time I think I have something under control.

BRB, adding this to my workout playlist right now, because it's exactly what I need in order to connect with my inner strength and keep moving forward. Or maybe it's for my cleaning-my-apartment-in-my-underwear mix? Screw it, I'm doing both.

Oh yeah, I'm haunted by the distant pastCalled to the skies but she was she overcast

These two lines are super loaded for me, and I love them. First, there's an important reminder to let the past be the past — you decide what haunts you and what you let go of. And second, there's a message about finding the strength to carry on within yourself. You can look to whatever you want for help, but sometimes the skies are going to be overcast, and you aren't going to get what you need, so ultimately it comes down to you. And finally, Sia ends the song with:

...and she has me so worked up at this point that I could cry. We're all home right now: home in our countries, in ourselves, and we're going to find our way back to the kind of love and acceptance and safety that we all deserve. Listen to the song in full below, and just try not to tear up.

So good job writing a song for the movie Lion, Sia, but as it turns out, you also wrote one for all of us.