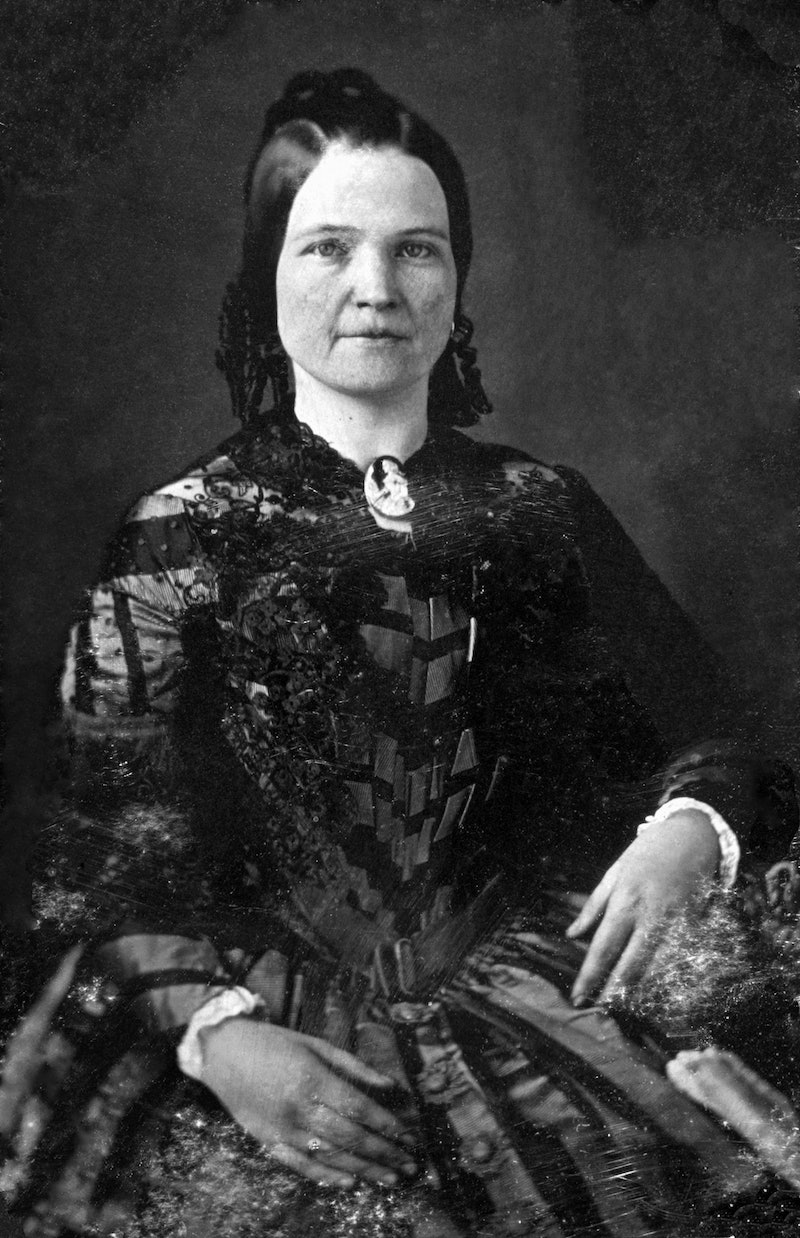 The internet is good for many things: Cat videos, giving you an excuse to stay in on weekends, and bringing conspiracy theorists together like never before. After all, you can say what you want online without having to worry about nuisances like fact-checking (although fact-checking is definitely something we should all be doing). But as these conspiracy theories from history show, American conspiracy theories aren't a new phenomenon — even if the birther movement has been hogging the media spotlight these days. (In case you missed the memo, by the way, the birther myth has been very much debunked.)

You've probably heard of the big conspiracy theories: The Roswell UFO incident, unscrupulous men in black with the technology to wipe your memory, the Philadelphia experiment, and so on. The most famous, of course, is the assassination of John F. Kennedy, which is at the center of dozens of theories speculating that Lee Harvey Oswald wasn't acting alone. But people love finding patterns, whether or not those connections actually exist, and as a result, all kinds of conspiracy theories have popped up throughout history.

Some are rather more imaginative than others — don't you just love the lizard overlord theory? — but that just makes them more entertaining. Here are four conspiracy theories from American history, four of which you probably haven't heard of, and one that's probably as familiar as the American flag.

First Ladies have always been scrutinized by Americans, and during the Civil War, all eyes were on the Lincolns. According to some historians, Mary Todd Lincoln was accused of being a spy for the Confederacy, partly because her brother and several half-brothers fought on the side of the secessionists and partly thanks to her erratic behavior while living in the White House. In fact, her loyalties were questioned to the point that the accusations were printed in the press; according to historian Catherine Clinton speaking with the Daily Beast, security officials actually began screening Lincoln's mail to pacify believers.

It's worth noting that some have questioned whether the accusations ever existed at all. In 1990, a letter to the editor published in the New York Times called it an "old and doubtful story" cooked up for political reasons. But whether or not the accusations are true, it's safe to say Lincoln probably had too much going on in her life to squeeze in treason.

Most Americans know the story well: After assassinating Abraham Lincoln in a movie theater in 1865, John Wilkes Booth was found on a Virginia farm, where he was shot by Union soldiers. That's what the history books say — but according to some, the man who was killed that day was merely a lookalike, despite being identified as Booth by people who knew him in life. The theory maintains that Booth managed to escape to Texas, where he lived out his days under an assumed identity. It's a story that goes in and out of fashion, but it's widespread enough that Time ran an article on the subject just last year.

In the '40s, the U.S. government began adding fluoride to public water sources to protect against tooth decay. It's been at the center of controversy pretty much from the start, but the reasons differ wildly. Here's the most outlandish (and the most entertaining): Beginning all the way back in the Cold War, some people believe that fluoride is part of a shady government scheme to exert mind control over the population. I guess according to this theory, the tooth protection is meant to be a happy side effect?

(There's no evidence to support the theory, by the way. For the curious, fluoride works by strengthening tooth enamel — what the American Dental Association calls a "systemic" benefit that helps teeth resist decay.)

Yes, you read that correctly. In 1983, a group of anonymous men kidnapped Shergar, widely considered to be the greatest racehorse of all time, from a farm in Ireland. Despite a police investigation that sounds straight out of movie — according to the BBC, it involved losing the press by running out of the back door of a restaurant — the horse was never seen again. The identity of the kidnappers remains a mystery to this day.

So what does this have to do with American history? One conspiracy theory attributes the kidnapping to the New Orleans mafia. According to the Independent, the story is that Jean Michel Gambet, a French man, borrowed money from the New Orleans mafia to buy a horse from one of Shergar's owners. Although the deal didn't take place, Gambet supposedly spent the money anyway and couldn't pay it back. To recoup the loss, the mafia kidnapped Shergar, who happened to be worth a heck of a lot of money at the time.

That's one theory, at least, and since the kidnappers were never identified, who knows? Maybe Shergar got to live out the rest of his life munching on beignets.

You had to know the mother of all conspiracy theories would make it onto the list. Even after nearly 50 years, some question whether Neil Armstrong ever set foot on the moon in 1969. According to the theory, the United States faked footage of the moon landing out of desperation to win the space race against the USSR. Supposedly, the government filmed the astronauts' famous walk on a film set, possibly with the aid of film director Stanley Kubrick. To support the theory, believers point out that the American flag waved slightly when Aldrin planted it in the soil, suggesting the presence of a wind — something that should be impossible in the vacuum of space. (NASA has said that the flag moved as Aldrin twisted the pole.) Oh, and the astronauts might have been brainwashed into believing they really landed on the moon, according to this theory.

Despite being thoroughly debunked, it's a surprisingly enduring theory. A 1999 Gallup poll found that around six percent of Americans believe the moon landing was faked, and in 2009, a survey conducted by E&T Magazine found that one in four British respondents thought the theory had merit — not exactly widespread, but still more common than you'd expect. Something tells me Neil Armstrong's spirit spends a lot of time facepalming.