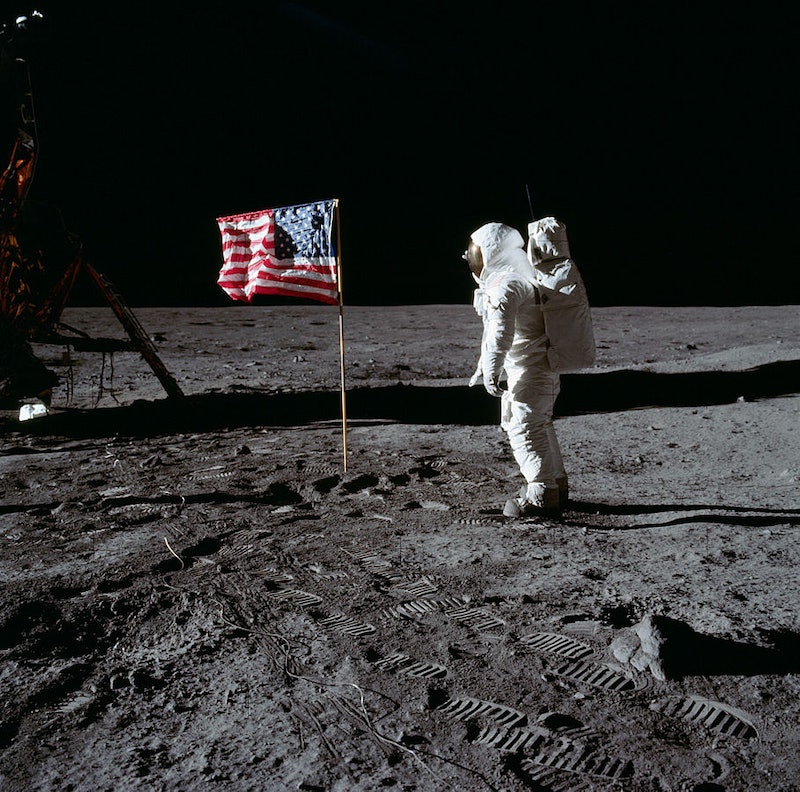 Every time I encounter stories about giant lizard people or grassy knolls, I always end up asking myself the same question: Why do people believe conspiracy theories in the first place? While some such theories have, in fact, turned out to be true — the terrifyingly unethical Tuskegee Syphilis Experiment, MK-ULTRA, and so on — so many of them are just so outlandish that I can't quite fathom how they could possibly be taken for truth. But according to new research published in the journal Applied Cognitive Psychology , people who believe in conspiracy theories generally have at least one thing in common: They feel like they have little control over their own lives.

The research, which was conducted by Jan-Willem van Prooijen of VU University Amsterdam, took the form of two experiments, both geared towards figuring out whether there were any connections between conspiracy theory believers — and it turns out, there are. The first experiment took a sample of 119 people and divided them up into two groups. The first group was then asked to write about a time when they felt totally in control; the second, meanwhile, was asked to write about a time they felt like they weren't in control at all. Completing these activities primed the first group to feel powerful and the second group to feel helpless.

Then, the participants were asked how they felt about something which many believe to be a government conspiracy: A building project in Amsterdam which had the unfortunate side effect of destroying the foundations of many existing houses. Ostensibly the destruction of the other buildings' foundations was an unforeseen result of the project; however, some also claim that the whole thing is the result of a conspiracy of the city council.

Guess what happened? Yep: Those who had been primed to feel helpless were more likely to believe that the building project was a conspiracy. Said van Prooijen to TIME, “We found that if you give people a feeling of control, then they are less inclined to believe those conspiracy theories. Giving people a sense of control can make them less suspicious over governmental operations.”

However, there are a few… well, not exactly flaws, but things to consider when looking at this experiment: First, 119 people is a relatively small sample size; and second, the participants were all Dutch. Because of both of these factors, we can't necessarily draw any globally-reaching conclusions, and as van Prooijen noted, “cultural variables” also have a hand in how much or little people are willing to buy into conspiracy theories. “But,” van Prooijen said to TIME, “the essence of conspiracy theorizing is, I think, universal in human beings. People have a natural tendency to be suspicious of groups that are powerful and potentially hostile.”

In order to examine this side of the whole thing, therefore, van Prooijen conducted a second experiment. This time, the researchers took a look at survey data taken from a nationally representative sample of Americans in 1999 — specifically from the last couple of months of the year, which, of course, preceded Y2K. Although the researchers were analyzing data that had already been gathered (and gathered over 15 years ago, at that), they found that there was a similar priming effect going on: The more afraid people were of Y2K in 1999, the more likely they were to believe in other conspiracy theories like those surrounding the Kennedy assassination or the government covering up the existence of UFOs. Interesting, no?

So: If that's why people believe conspiracy theories, what sorts of theories might they be inclined to believe? For the curious, here are five of the most notable conspiracy theories out there — and before you ask, no, I don't believe in them. There's a reason we call them “theories”; none of them have been proven. And while it's true that some of them haven't exactly been disproven, that still doesn't mean that they themselves are true. It's a logical fallacy: The "argument from ignorance," which erroneously asserts that a proposition is true simply because it hasn't been proven false yet. It fails to take into account a third option beyond something being true or false — the fact that there is insufficient evidence to make a statement about something's veracittkey either way.

I probably don't need to tell you this, but the list of conspiracy theories associated with the assassination of John F. Kennedy is as long as I am tall. Most of them, however, hinge on the same belief: That Kennedy's and Governor John Connally's injuries could not have been caused by a lone gunman situated behind and to the right of the motorcade. Whether the Mafia, the Illuminati, the government, or aliens are also involved, however? Well, let's just say the jury's still out on those ideas.

Somehow I only recently learned of the whole “giant lizard people are running the government!” belief (courtesy of Jon Ronson's 2001 book Them: Adventures With Extremists) — but you guys? It's a doozy: Apparently somewhere in the neighborhood of 12 million Americans “know” that the government is run by human-sized lizard creatures called Reptilians. Throughout Them, the question repeatedly comes up as to whether those who believe the giant lizard theory are antisemitic, with “Reptilians” being a euphemism for Jewish people; Ronson's conclusion, however, is that it isn't — that is, when people talk about giant lizard people, they actually mean giant lizard people. British former footballer and sports broadcaster David Icke is a big proponent of this theory.

3. The Philadelphia Experiment and the Montauk Project

You guys. I love these ones. They are so wacky. The Philadelphia Experiment was allegedly a 1943 military project working to render the U.S. Navy destroyer escort USS Eldridge invisible; the Montauk Project, meanwhile, was allegedly an extension of that same project geared towards developing both questionable psychological warfare tactics and time travel. The stories about both the Philadelphia Experiment and the Montauk project are riddled with inconsistencies, so both of them are generally thought to be hoaxes.

They're still kind of hilarious, though.

Like the JFK assassinations, the Apollo moon landing conspiracy theories are well-known enough that you probably don't need me to tell you about them. In case you're curious about why it isn't at all likely that the moon landings were hoaxes shot on Hollywood sound stages, though, National Geographic took it upon themselves to debunk a whole bunch of them back in 2009.

I'd suggest picking up the previously mentioned book Them for more about this one — but in short, the New World Order conspiracy theory posits that the global elite are busy banding together in order to create an authoritarian world government, with themselves ruling from the top.

Happy conspiracy hunting! Or… something!

More like this
David Tennant’s Transformation In ITV’s 'Litvinenko' Is Astonishing
By Sophie McEvoy
Dyson Is Dropping Futuristic, Air-Purifying Headphones
By Rachel Lapidos
10 Organizations To Support On Latinx Women's Equal Pay Day
By Caroline Burke and Mia Mercado
Here’s Your Daily Horoscope For December 8, 2022
By Mecca Woods
Get Even More From Bustle — Sign Up For The Newsletter