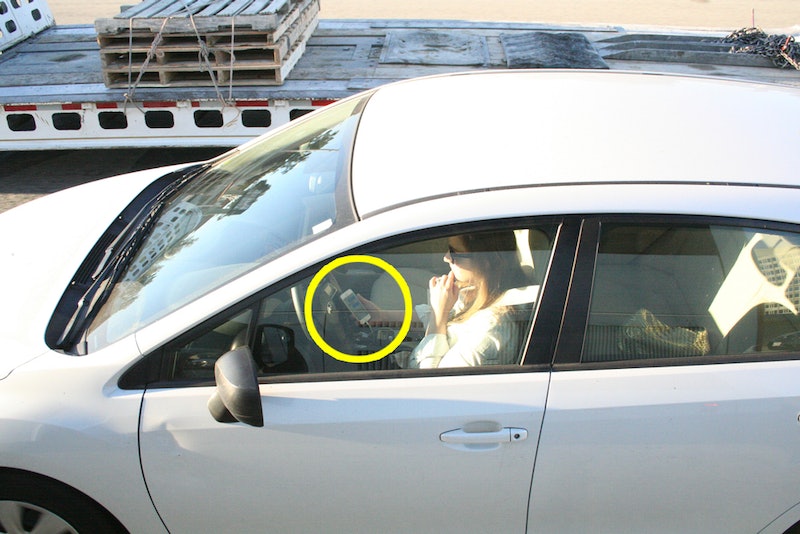 At any given moment, approximately 660,000 drivers in the U.S. are busily tapping away at their cell phones or other electronic devices while they’re behind the wheel. Scary, right? It’s illegal in many states to text while driving, but that’s not stopping most people from doing it anyway. If the law won’t put a halt to it, though, maybe a little bit of public shaming in the form of 50-foot-high billboards will.

Graphic designer Brian Singer (no, not that Bryan Singer) began a website he calls TWIT Spotting (“TWIT” standing for “Texting While in Transit") in February after noticing the number of people he saw texting while driving during his daily commute. “I’ve been blown away by the number of people texting while in traffic, on the freeway,” he recently told Gizmodo (Singer drives to work on the 101 Freeway). “For every nose picker, there’s 20 texters. Unofficial estimation by me.” Given that the average driver takes their eyes off the road for 4.6 seconds each time they check or answer a text, Singer knew it was a problem worth addressing — especially since 80 percent of car accidents occur due to driver inattention, with most crashes happening with less than three seconds of reaction time.

Featuring photos of drivers more focused on their phones than on the road, TWIT Spotting seeks to end distracted driving by community involvement. Singer drives home the fact that any photos snapped by him happened while he was a passenger, not the driver; the site also encourages submissions by readers, as long as they follow the same stipulation. Chock full of statistics about texting and driving, it emphasizes just how dangerous it can be not to fight the desire to check your phone right that very minute when it buzzes or bings at you.

So: What’s the deal with these billboards, then? April is Distracted Driving Awareness Month, so in honor of the occasion, Singer personally funded 11 billboards around San Francisco, all of which depict images of people texting behind the wheel from TWIT Spotting. Says Singer of the project, “My hope is that it will freak some people out and make them think twice before picking up the phone while driving. My greater hope is that it inspires others to start taking photos, too. If enough people start doing this, it could have a dramatic effect on people’s behavior.”

But wait — aren’t billboards a distraction in and off themselves? Kind of, yeah — which is why he made sure the billboards are totally free of words and phrases. “It’s truly dangerous and I want people to think twice before checking an email, texting, or other driving distractions,” he says; he adds, “There’s also a nice juxtaposition, I think, of driving along a freeway, looking up at a billboard, and seeing photos of people who had been driving on that same freeway, using their phones.”

I’m generally not a big fan of public shaming, but in this case, I’m kind of leaning towards it being a good thing. Everyone benefits from fewer distracted drivers; if the possibility of being in a car accident or of being fined a couple hundred bucks isn’t quelling the problem, then maybe something that nails home the whole “it could happen to you” thing will — even if the “happening” here is showing up on a billboard in all your texting-while-driving glory.

More like this
The Real Reason Your Instagram Story Viewers Show Up In That Order
By Emma Carey
How To Turn Off Night Mode On Your iPhone Camera
By Emma Carey
Behind The Hilarity Of The "POV: You Walk Into My Room" TikTok Trend
By Lexi Inks
20 Smart Devices Under $35 That’ll Change The Entire Vibe Of Your Home
By Emma Carey
Get Even More From Bustle — Sign Up For The Newsletter