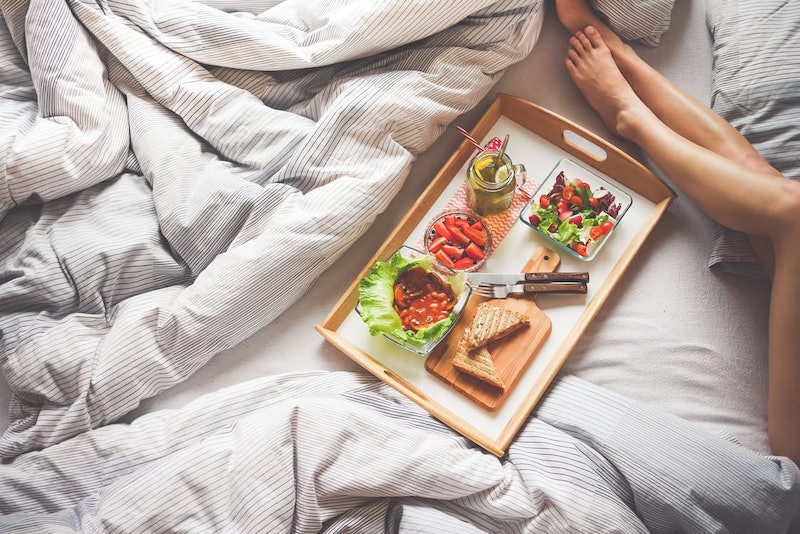 You are what you eat; but more than than, your brain is very much what you eat, at least according to mounting evidence from scientists. A new collection of five studies published by Clinical Psychological Science this month highlights the diversity of ways in which nutrition can impact our mental health, from insomnia to depression, ADHD to OCD. Therapy and medication are likely going to be part of the medical arsenal for mental illnesses for the foreseeable future, but scientists are increasingly asking us to look to our diets to help us prevent mental health problems from developing or aid symptoms that have already developed. The whole "healthy diet, healthy mind" thing isn't just an Instagram caption after all.

Scientists Julia Rucklidge and Bonnie Kaplan, both of whom have written about nutrition as a way of fighting mental illness before, told Clinical Psychological Science that the line's pretty clear: "The more one eats a Western or highly processed diet, the more one is at risk for developing psychiatric symptoms such as depression and anxiety. Conversely, the more one eats a diet rich in fruits and vegetables, high in healthy fats, nuts, and fish, and low in processed food (a Mediterranean-style diet), the more one is protected from developing a mental disorder." But things get more complicated when you look into the details of specific mental illnesses, how they develop, and what particular nutrients might interact to help or make them worse.

The link between gut and brain is clearly a complex one, and we're still understanding how it works; but no, you are not allowed to think that what you grab for lunch every day has no effect on your mental processes.

How Your Diet Influences Depression

The two studies that may interest young women the most were the two based on depression, not least because one of them had a very gender-specific outcome. One, conducted by Spanish scientists, looked at whether combining a Mediterranean diet with a "Mediterranean lifestyle" had any impact on depression; the other studied whether diets with high inflammatory properties could be tied to depression symptoms.

The first wanted to know if the Mediterranean diet, defined as "high intake of fruits, nuts, vegetables, bread, pulses, potatoes, seeds, cereals, and pasta), fresh and varied fruits as the main and usual dessert, olive oil as the main source of fat and commonly used for salads and cooking, frequent consumption of fish, moderate wine consumption with meals, low amounts of meat (mainly poultry instead of beef and pork), and low to moderate consumption of dairy products," and a lifestyle high in exercise and socializing could be helpful when it came to depression risk.

Unsurprisingly, people who did a lot of exercise and had good social groups were less prone to depression; but the Mediterranean diet also made a difference. The scientists thought that "olive oil, nuts, fruits, legumes, or fish, could be responsible for the reported effect through their anti-inflammatory and antioxidant properties as well as their capacity to improve endothelial function and neuronal membranes composition." In other words, diet that directly influences the brain's function could help with a lowered risk of depression. Good news if you plan on living in Greece.

The second study, though, is where things get really interesting. The scientists involved used data collected from nearly 7,000 civil servants working in London about their diets, and compared them to something called the Dietary Inflammation Index, a list of 45 foods that rates them according to what they do to the body's inflammatory biomarkers. (Inflammation is traditionally how the body reacts to infection and foreign articles, but food can influence it too.) They also got data on the civil servants' moods over the next five years, and whether they showed any depressive symptoms. They found that foods that were high on the Inflammation Index seemed to increase the likelihood of depressive symptoms, but only in women. "Although no significant association was found in men, women with the highest DII score (representing a diet with high proinflammatory potential) were more likely to develop recurrent depressive symptoms over the 5-year follow-up," the scientists said.

So not only does a good Mediterranean diet seem like a good idea, it seems that women's bodies, for reasons that are still being discovered, react particularly poorly to inflammatory foods in ways that influence our mental health. Sugar, red meat, and white bread are all inflammatory, and they may affect female brains in particular ways.

The other studies in the collection looked at OCD, insomnia, and ADHD, and all of them highlighted a different aspect of diet that can contribute to mental health in some way. An apple a day clearly isn't going to cut it any more. The studies linked micronutrients to relief from insomnia, omega-3 fatty acid deficiency with an increase in ADHD symptoms, and amino acids with a possible treatment for some OCD patients. What we put in our mouths, or don't, is clearly directly influencing our brains.

Some of the studies were more cut-and-dry than others. The one linking micronutrients to insomnia help, for instance, gave micronutrient supplements to 14 adults who'd had sleep problems over eight weeks, and found that they reported improvements in their sleep quality, the times they woke up in the night, how long they slept, and other insomnia difficulties. It was a tiny study without much control, but broad-spectrum micronutrients, as the supplements are called, looked pretty hopeful as a cure for the future.

The OCD trial wasn't quite as successful; it looked at whether doses of N-acetyl cysteine, which turns up in pork, chicken, granola, bananas and a bunch of other food sources, could help with OCD symptoms, and the findings showed that generally, they're not any better than a placebo pill. For some, though, it seemed to work: people under 34, and those who'd had OCD for less than 17 years, showed reductions in their symptoms. What can we read out of this? Well, different disorders interact with nutrition in different ways, and the brain's age and the length of experience of problems clearly shifts how our food helps or hinders us.

And what looks like a dietary problem can also be something else. The ADHD study, which looked at children with ADHD, found that they were more likely than their non-ADHD peers to have a deficiency of omega-3 fatty acids, which (as we all know) show up in oily fish, leafy vegetables, and nuts. The interesting bit was that the children didn't appear to be eating less omega-3 heavy foods than others; it seems that their bodies were processing the foods in ways that left them omega-3 deficient, and that deficiency was tied to severity of ADHD symptoms. In other words, it wasn't the diet that was the problem, but some fact of their systems that digested the omega-3s in an unusual way.

The bottom line? We're still understanding the specifics of the intricate dance between mental disorders, what we eat, and how our body processes things; it seems that a lot depends on gender, age, and other factors. In the midst of this scientific revolution, though, minimizing dairy and the red meat for more olive oil and green vegetables seems like a safe bet.

More like this
10 Pumpkin Recipes That Are Way More Creative Than Pie & Lattes
By Rebecca Deczynski and Alexis Morillo
On TikTok, Tinned Fish Date Night Is The Latest Viral Food Obsession
By Emma Carey
19 Latinx Therapists & Mental Health Experts To Follow On Instagram
By Kaitlyn Wylde, Naydeline Mejia and Lexi Inks
What Demi Lovato Really Thinks About Child Stardom, Depression, & Sobriety
By Radhika Menon
Get Even More From Bustle — Sign Up For The Newsletter