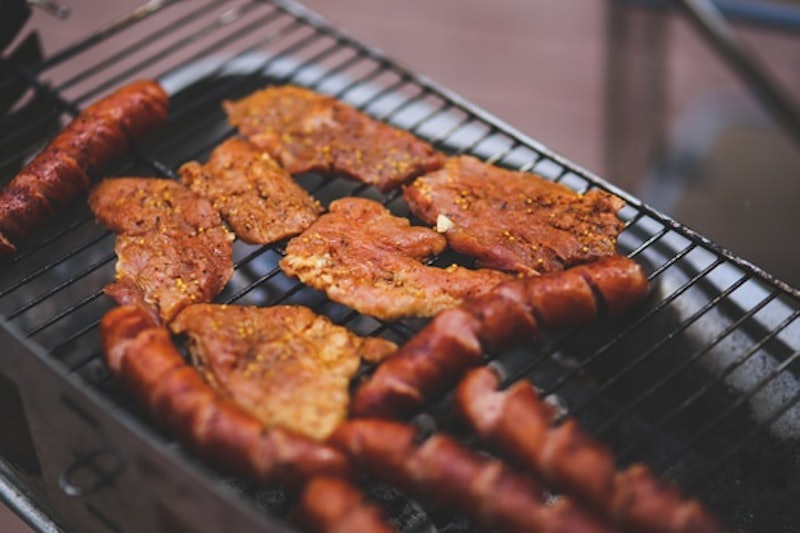 By now, you've probably heard that eating meat is bad for you. The World Health Organization made headlines last year when it declared processed meat a "carcinogen" that increases your risk of colon or rectum cancer by 18 percent. But it's not just processed meat that poses a health risk — science has known for a while that eating all kinds of animals, including "white meat," is bad for you. Like, really bad.

I myself had a vague idea that eating too much meat wasn't great for my health, but since I used to only eat "a little" meat, and usually organic at that, I sort of thought of myself as exempt. Well, not so much. While cutting back on your meat consumption in any form is a great step to take, the fact remains that eating any meat — hormone-free or not — poses several serious long-term risks to your health. It's worth knowing exactly what the health risks of eating meat are, so that you can make an informed decision for yourself about how much of a risk you feel it's necessary to take by continuing to consume animals.

Here are eight reasons eating meat is bad for you.

1. It Signifigantly Increases Your Risk Of Cancer

Most of us saw the story last year when the World Health Organization declared processed meat a "carcinogen" which increases one's risk of colon or rectum cancer by 18 percent. But it's not just processed meat that puts you at risk. A vast array of studies from top universities and independent researchers has found that eating chickens, cows, and other animals promotes cancer in many forms. Large studies in England and Germany showed that vegetarians were about 40 percent less likely to develop cancer compared to meat-eaters, the most common forms being breast, prostate, and colon cancers. A 2014 Harvard study found that just one serving a day of red meat during adolescence was associated with a 22 percent higher risk of pre-menopausal breast cancer, and that the same red meat consumption in adulthood was associated with a 13 percent higher risk of breast cancer overall.

A number of hypotheses are used to explain the connection between meat consumption and cancer risk. First, meat is devoid of fiber and other nutrients that have a protective effect against cancer. Meat also contains animal protein, saturated fat, and, in some cases, carcinogenic compounds such as heterocyclic amines (HCA) and polycyclic aromatic hydrocarbons (PAH), which are formed during the processing or cooking. Meat also contains hormones, which increase your cancer risk (more on that in a bit).

2. It Increases Your Risk Of Heart Disease And Diabetes

This is the reason Bill Clinton went vegan. Meat, dairy products, and eggs all contain cholesterol and saturated fat and contribute to America's top killers: heart attacks, strokes, diabetes, and various types of cancer. Decades of scientific study have linked dietary cholesterol to cardiovascular disease — our country’s number-one cause of death, killing nearly 2,200 Americans daily. Saturated fat is present in all meat and fish, even chicken and turkey cooked without the skin.

Additionally, according to a study published by the American Diabetes Association, people who eat high amounts of animal protein are 22 percent more likely to develop diabetes. Saturated fat has even been linked to breast cancer, as well as Alzheimer’s disease, dementia, and cognitive decline. Fortunately, there are many plant-based protein sources that are low in saturated fat and won’t send your LDL (“bad”) cholesterol levels through the roof.

Of course, you get to define what "a healthy body weight" means for you, and I'm not saying you should go vegetarian or vegan just to stay slim. That said, if you are looking to maintain a lower BMI for your health, it is worth knowing that meat-eaters are three times more likely to be obese than vegetarians, and nine times more likely than vegans. On average, vegans are 10 to 20 pounds lighter than adult meat-eaters. Vegetarian diets are also associated with higher metabolic rates (around 16 percent faster for vegans compared with meat-eaters).

The U.S. Department of Agriculture (USDA) reports that 70 percent of food poisoning is caused by contaminated animal flesh. Foodborne diseases, such as E. Coli, Salmonella, and Campylobacter, cause an estimated 76 million illnesses, 325,000 hospitalizations, and 5,000 deaths in the United States each year.

Eating meat puts you at a greater risk for food poisoning because animal products are often tainted with fecal contamination during slaughter or processing. Fecal contamination in chicken, especially, is a major problem. According to a Consumer Reports study, 97 percent of raw chicken in U.S. supermarkets is contaminated with bacteria that could make customers sick. So if you eliminate animal products from your diet, you'll also be eliminating your exposure to the most common carrier of these bacteria.

Meat, eggs, and dairy products slow the flow of blood to all the body’s organs — and not just the heart. Originally, it was thought that impotence was caused only by anxiety, but according to the Erectile Dysfunction Institute, up to 90 percent of all cases of impotence are actually physical as opposed to psychological, meaning the high cholesterol, obesity, diabetes, prostate cancer or inflammations, and hormonal imbalances that eating meat causes might also contribute to impotence.

A new study published in The American Journal of Clinical Nutrition also suggests that men who couple regular exercise with a diet rich in flavonoids, which are found in fruits like strawberries, blueberries, and apples, may reduce their risk of developing Erectile Dysfunction by over 20 percent. Numerous physicians and nutritionists agree that the best way to prevent artery blockage as well as multiple other conditions that cause impotence is to eat a diet high in fiber, including plenty of fruits, vegetables, and whole grains. Of course, you can still eat these foods if you eat meat, but you're going to have fewer servings over time, and more health risks added into the mix.

6. Most Meat Has Hormones In It

To make cows grow at an unnaturally fast rate, the cattle industry feeds them pellets full of hormones. While low levels of naturally-occurring hormones are found in various foods, many scientists are concerned that the artificial hormones injected into cows especially cause health problems in people who eat them. And while organic or hormone-free meat might be a better option, you're also not eliminating your chances of ingesting the naturally-occurring sex hormones present in the animals when they were killed. The sex hormones progesterone, testosterone, and estrogen are all naturally occurring in animals, whether they've been given artificial hormones or not — so when you eat those animals, you're also eating hormones.

7. It May Make You Resistant To Antibiotics

Roughly 70 percent of the antibiotics used in the United States each year are given to animals that are used for food, meaning if you eat meat, you run a greater risk of making yourself antibiotic-resistant. Vancomycin, a drug that is known as a “last defense” in fighting the deadly blood infections and pneumonia caused by staphylococcus bacteria, is becoming obsolete because resistant strains have developed in farmed animals who are given the medicine as a growth stimulant.

8. It Increases Your Risk Of Death

In large part because of all the health risks mentioned above, meat eaters just don't live as long as vegetarians and vegans. According to a study of over 70,000 people published in the journal JAMA Internal Medicine, vegetarians were 12 percent less likely to have died during a six-year followup period than their meat-eating peers. Vegetarian men live to an average of 83.3 years, compared with non-vegetarian men, who live to an average of 73.8 years. Vegetarian women live to an average of 85.7 years, which is 6.1 years longer than non-vegetarian women, according to the Adventist Health Study-2. If you'd like to go the distance, looks like cutting out animals is one of the simplest things you can do.

The bottom line? One of the best things you can do for your health is to either eat less meat, or cut it out altogether. Instead of contributing to the destruction of your body, the environment, and animals' lives, you'll be on the side of health, sustainability, and respect for all living beings.