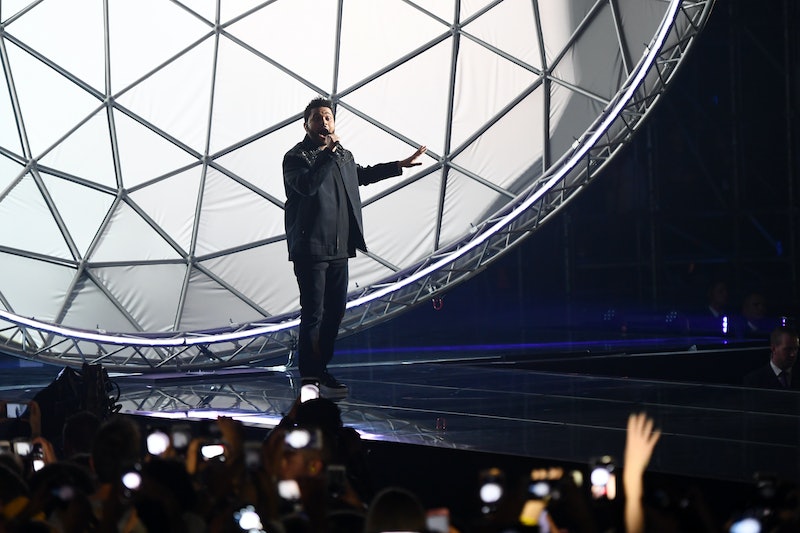 Because 2016 is all about the surprise drop, The Weeknd just released two songs from his upcoming album, Starboy. Why the hell not? But what — if any — are the influences behind "Party Monster" and "I Feel It Coming"? The songs are starkly different, both musically and thematically. While "I Feel It Coming" involves a sunny melody and a collaboration with the kings of feel-good pop, Daft Punk, "Party Monster" is a much more typical outing for Abel Tesfaye. It's dark, dense, and about anonymous sex. Still, I'd argue even this single showcases a new influence for The Weeknd.

For me, the two songs showcase the album's twin influences, Prince and David Bowie. During an interview with The Wall Street Journal, Testafye made no bones about his love for the Thin White Duke, stating "I just love Bowie; I think he's the ultimate inventor." In the same interview, he mentioned that he and Prince had scheduled to work together, but the artist passed away in April before they had a chance to meet.

There are hints of these two musical giants in both of the new tracks. "I Feel It Coming" doesn't sound like a The Weeknd track, exactly. It's too optimistic. It's also too retro.

Listen to those major chords. This song is unashamed about trying to turn your frown upside down. It's also theatrical in a way that just toesteps the boundary between people-pleasing and outright cheesiness. That faintly blurry intro to give you enough time to make it to the dance floor? Check. The building volume and emotion? Check. The minimally backed, vocally soaring bridge? Check.

It reminds me of a really slowed-down remake of Prince's "I Would Die For You." For a start, there's the same lyrical theme of the male singer as the listener's saviour. In the words of Prince, "I'm your messiah." This is echoed by Tesfaye's pre-chorus refrain, which implies he has the same power to redeem the listener:

Then, there's the way the song skirts the boundaries between being a love song and a dance hit. It's celebrating their love, but not as much as it celebrates an emotion: "I feel it coming." While Prince's hit is more specific about emotions, it navigates the same tricky gray area musically.

Which brings us to "Party Monster."

We could have anticipated Bowie's influence based on two cues: Starboy, the name of his upcoming album, was a not-so-subtle nod to Bowie's hit "Starman." Then there was Tesfaye's dramatic haircut, snipping off the Jean-Michel Basqiat-inspired dreadlocks he'd been rocking ever since he took the spotlight for the cover photo for his new album. This felt reminiscent of the dramatic changes in Bowie's look with each new creative project. So given this, and Tesfaye's shoutout to Bowie in The Wall Street Journal, a Bowie-inspired song was in the cards.

Cutting straight to the obvious, there's no clear musical influence from Bowie here. That's not unexpected. Abel Tesfaye has always been, above all else, a producer, king of the cut and paste, supremely talented at putting familiar sounds in unfamiliar setting (for example, the haunting refrain from Siouxsie and the Banshees' "Happy House" in "House Of Balloons/Glass Table Girls"). Unless he was able to weave a Bowie chorus (which presumably would cost way too much money in licensing rights) into his own composition, it's hard to imagine how he would write a song that would sound like Bowie, because Bowie's work was too constantly-changing to lend itself easily to imitation or inspiration.

All the same, the spirit of Bowie is in evidence in the song's title and its lyrics. Both artists share one thing: they were both renowned from the beginning of their careers onwards for excess. While little is known about the famously-private Abel Tesfaye's personal life, his first mixtape, House Of Balloons, was about drugs, partying, feels-free sex, and not much else. While Bowie's music at the beginning of his career was too abstract in lyrics to be autobiographical, he was far too open with journalists for his passion for partying to go unnoticed, with him telling Cameron Crowe in 1975 "I’ve had short flirtations with smack and things but it was only for the mystery and the enigma. I like fast drugs. I hate anything that slows me down."

We see this same fast partying lifestyle in "Party Monster" when Tesfaye sings:

I've been poppin', just took three in a rowI'm down to do it again, I'm on a roll

But the overall attitude of the song to drugs isn't positive. Aged 66, Bowie reminisced about his drug issues at 28 years old: "Drugs had taken my life away from me. I felt as though I would probably die and it was going to be all over." During this period of his life, Bowie suffered from hallucinations thanks to his overuse of cocaine. We get a similar level of bleakness in "Party Monster," where the repetition of "I'm good, I'm good, I'm great" is undermined by the chorus in which we learn that the persona is "Paranoid" and surrounded by strangers ("Woke up by a girl, don't even know her name").

Taking two musical giants as your influences is a bold move. But The Weeknd has never been short on courage and his bet appears to have paid off. Musically, "I Feel It Coming" is a homage to Prince, and, lyrically, "Party Monster" is a homage to Bowie. All the same, The Weeknd still manages to sound completely himself. Here's hoping the rest of the album is even half as accomplished as what we've heard so far.