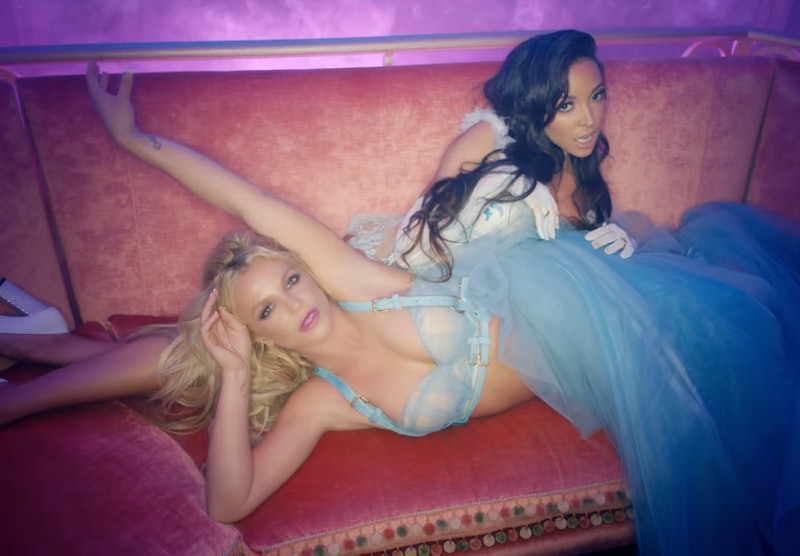 If you woke up this morning thinking that what the world really needs right now is a new Britney Spears music video, then you just so happen to be in luck. Spears' new video for "Slumber Party" was released on Friday, and it's pretty damn spectacular. Showing the singer (and guest, Tinashe) enjoying a truly decadent looking party together, the video is full of sumptuous pastel shades, exquisite costumes, and writhing mounds of human beings (naturally). It's sultry, it's seductive, and it's so Britney. Having casually re-watched the video just a standard handful of times (no biggie), I happened to notice all of the Britney Spears music video tropes in "Slumber Party" that give it that unique vibe, as unmistakable as her iconic vocal fry.

There are similarities to old videos, sure, but it's a lot more than that. It boils down to specific camera shots, costume decisions, dance moves, and actual behavior within the videos. Over time, all of these have become what can only be considered Britney-isms, and "Slumber Party" is full of them. I have to say, I'm loving every second of it. What am I talking about? Watch the video for "Slumber Party" below, and then take my hand and follow me into a wonderland called Britney-ville. I'll show you exactly what I'm talking about.

1. She Takes Her Jacket Off

Is she overheated or is this a style thing? Either way, at the start of "Slumber Party," Spears does away with her (very fetching) jacket, just as she does about a minute into the "I Love Rock 'N' Roll' video.

Listen, you'll have no arguments from me over this choice. Every starlet has her target, and these very handsome, well dressed men are Spears'.

As Seen In: "Womanizer"

In "Womanizer," Spears cares little for the health and hygiene codes of a restaurant and throws her man down on a serving surface before crawling up towards him. In "Slumber Party," she crawls slowly down a long dining table towards a guy before licking up his spilt drink. Because waste not, want not, guys.

As Seen In: Basically every Spears music video ever

You know the shot I'm talking about — it's Spears, looking absolutely dazzling, her hair blowing ever so slightly into her face. Her entire face fills the screen as she coyly sings (just to you, right?).

As Seen In: Again, every Spears video ever

Whether she's singing, dancing, crawling, writhing, or, I don't know, jumping off a motorcycle, Spears loves to voraciously thrash her hair back, and whip it round her head.

7. A Writhing Mass Of Bodies

In "Slumber Party," it seems like the sleepover winds down into a (totally innocent, right) cozy, snuggling mass of people. In "I'm A Slave 4 U" and "Womanizer," however, these masses of people tend to be pretty sweaty and kind of naked. Whatever helps you sleep at night, ladies and gents.

As Seen In: "Me Against The Music"

In "Slumber Party," it's only really Spears' radical changes in costume (from princess to showgirl, for example) that seem to really suggest multiple versions of herself. But in "Toxic," "Womanizer," and "If U Seek Amy," the duplicity of how she is represented is very literal. You have party girl and wholesome mother, and entire squadrons of undercover spies in various tremendous disguises. The more Britneys the merrier, I say.

It's worth noting that I happen to absolutely adore every single one of Spears' music video idiosyncrasies. The woman is truly iconic, as are her performances and video personas. As such, this formula is totally not broken and doesn't fixing in the least bit. Just keep on being you, Britney Spears.