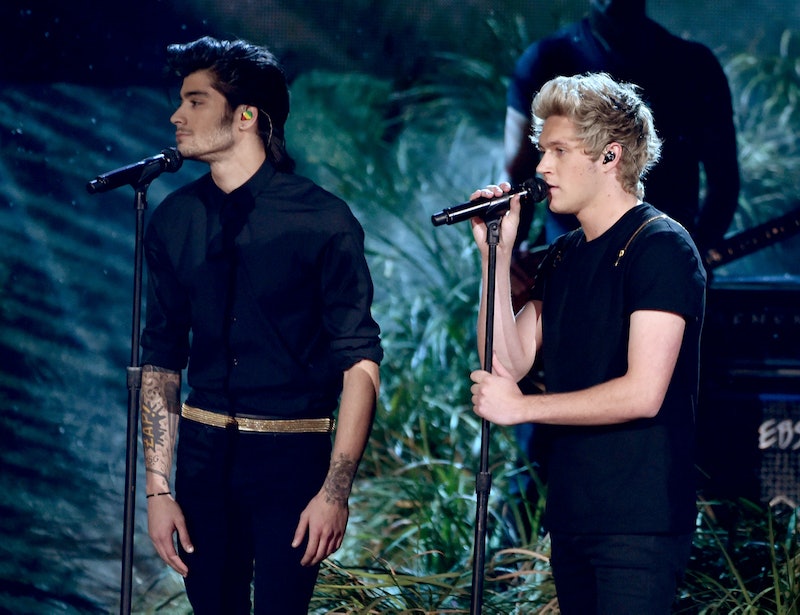 Ah, remember the good ol' days? Back when One Direction was one entity and there's was happiness and music and long hair? *Sighs* Yeah, me too. Nostalgia aside, the boys have gone on to do great things, though it has separated them. At least, you know, in terms of distance. But it does bring up a few questions in terms of their relationships with one another. For instance, are Niall Horan and Zayn Malik still friends? Because, uh, I sure hope so. *Plays "History" on repeat*

The reason why this question seems so important now, is that Horan is performing at the American Music Awards, the same place where Malik will also probably be, if being nominated for Artist of the Year and being the beau of the host is any indication.

If you're curious if we'll see them hug it out on the red carpet or mingle at after parties together, you are not alone. Especially because there have been rumors of a "rift" between them. As The Daily Mail reported in September, "Zayn Malik is reportedly the only member of One Direction to not congratulate Niall Horan on his new solo single." The Daily Mail explained this helped rumors of a discord between them "play out." Add that to HollywoodLife's claim that "Malik fears an awkward run-in" with Horan, and it's not hard to see why some would have doubts.

Then, there's also the whole thing where, as MTV News UK explains, the "One Direction bandmates are actually set go up against each other, battling it out to win Favorite Breakout Artist" at the People's Choice Awards. Which, OK, I guess is a little awkward. But that's still a ways off. Let's focus on the now. Take it one award show at a time.

If you're worried, there's really no reason to fret. Why? Because Horan recently did a Twitter Q&A and answered the question, "What do you miss most about the boys?" And his answer was both heartwarming and reassuring. He didn't refer to Malik specifically, but included all the band members in his answer: "Just being around everyone all the time... But, you know, everyone gets to keep in touch with each other and it's great. We've always had a great relationship and we always will."

So, there you have it. While the two may not be BFFs, there doesn't seem to be any real animosity, either.