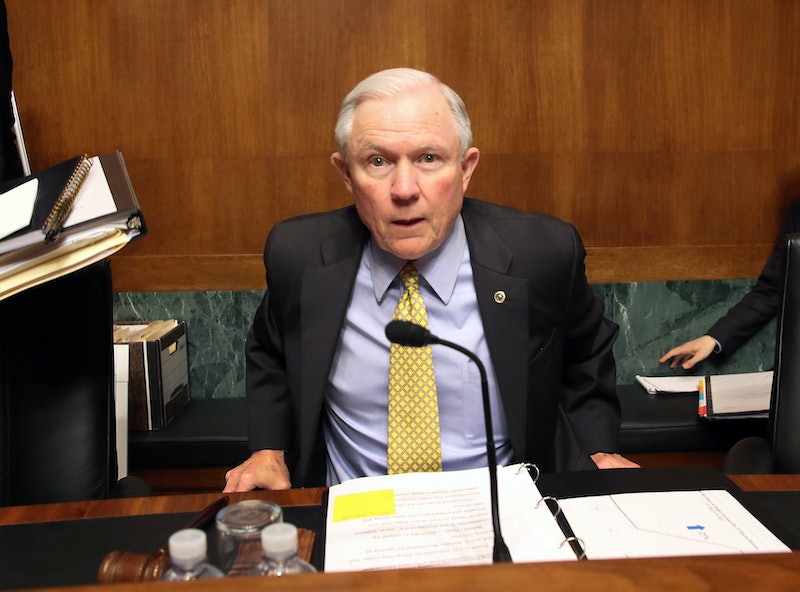 After heavy criticism was leveled at President-elect Donald Trump for his appointment of former Breitbart News chairman Steve Bannon, he announced Friday that he would appoint Alabama Sen. Jeff Sessions to serve as his attorney general. The announcement was met with almost immediate condemnation from critics who accused Sessions of racism. Their evidence largely stems from when Sessions was nominated to be a federal judge in 1986. Among the details alleged during the Senate confirmation hearings, Thomas Figures, an African American assistant U.S. attorney, said Sessions called him "boy" multiple times.

In response to the 1980s allegations, Sessions himself vehemently denied those charges of racism, saying, "I am not a racist, I am not insensitive to blacks. I have supported civil rights activity in my state. I have done my job with integrity, equality and fairness for all." His denial failed to move the Senate Judiciary Committee, even in a GOP-led Congress, and his nomination to the court did not move forward.

Sessions' attorney general nomination will also be subject to Congressional approval. He requires a simple majority in the Senate, which has a GOP majority — Tarini Parti at BuzzFeed News predicted that Sessions is "unlikely to face GOP opposition in the Senate" and should sail to a confirmation without much difficulty.

Whether you find that concerning or heartening depends largely on whether you believe the things Sessions is alleged to have said.

He Called The Voting Rights Act "A Piece of Intrusive Legislation"

Sessions himself admitted to having said this about the law that essentially re-enfranchised millions of black Americans who had been prevented from voting by deliberately restrictive laws, particularly in Southern states like his native Alabama. He ultimately voted to renew the Voting Rights Act when it was last reauthorized, but he still openly opposes an entire section of it.

As attorney general, Sessions would be in charge of defending the Voting Rights Act, which makes his discomfort with (and in some cases, opposition to) the bill all the more concerning.

During his hearings for the judgeship, Sessions defended himself against allegations of racism by saying that his children attended integrated schools and that he had shared a hotel room with a black attorney "several times," as if he could not be racist simply because he and his children had spent at least some time in the presence of black people.

He Allegedly Said That He Thought The Ku Klux Klan Were "OK, Until [He] Learned That They Smoked Marijuana"

These were among the comments that came up during Sessions' judgeship hearings. Figures said that Sessions had said that the Ku Klux Klan was "OK, until he learned that they smoked marijuana." Sessions told investigators that the comments were intended as a joke.

Sessions' friend, J. Gerald Hebert, testified to Congress that when he told Sessions about a man who said a white lawyer handling civil rights cases was a "traitor to his race," Sessions replied, "he probably is."

In response to the allegations, Sessions denied having made the comment, then apparently amended his statement, saying, "The best I could recall was that I said, well, he is not that popular around town; I have heard him referred to as a disgrace to his race."

He Allegedly Called The ACLU And NAACP "Un-American"

Sessions also denied having said these comments, but his would-be clarification seems nearly as unsettling as the alleged comments:

I made the comment that the fundamental legal barriers to minorities had been knocked down, and that in many areas blacks dominate the political area, and that when the civil rights organizations or the ACLU participate in asking for things beyond what they are justified in asking, they do more harm than good.

Referring To Civil Rights Lawsuits, He Allegedly Told Colleagues He Wished He Could "Decline On All Of Them"

Figures told investigators that Sessions reportedly threw a civil rights case file down in the middle of a discussion and said, "I wish I could decline on all of them." Figures also explained that he believed Sessions was being completely serious with his remarks, which he alleged showed a "hostility" to investigating those sorts of issues.

Ultimately, the members of the Senate Judiciary Committee reviewed these statements and alleged statements and declared Sessions unfit to be a federal judge. However, now the Senate looks poised to approve his appointment to one of the most important legal occupations in the country now.