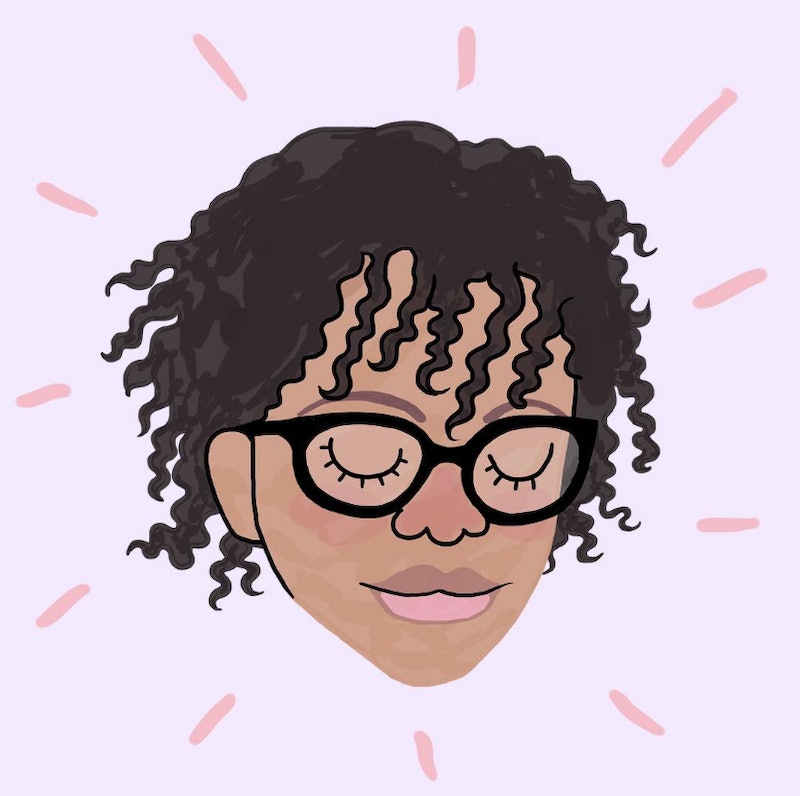 Over the past several months, artists from around the nation have used their talents to interpret the 2016 presidential election and, most recently, Donald Trump's win. One such art project, called "Draw Me Tyler," features originally drawn portraits of people of marginalized populations, from Muslim women to the LGBTQ community to people of color. "I've found a lot of peace doing these portraits," writes Chicago-based illustrator Tyler Feder, who created the project, in an email to Bustle. "The process of drawing is very meditative for me, and it feels good to lose myself in a project instead of sitting around feeling sad (although I do think a little bit of wallowing can be cathartic as well)."

The project took off on Instagram on Nov. 9, the day after the election ended, when Feder sent out a call for drawing requests. People could ask Feder to draw their "selfie" portrait using the hashtag #drawmetyler or by sending her a private message on social media. "Since... I draw lots of portraits anyway, doing free portraits for people who were hurting felt like the perfect way to spend my day. After the day was over, I found I didn't want to stop — I was getting such a positive response to the portraits, from the people I was drawing and those who were just following along," writes Feder. "Not to mention, drawing portraits all day was a great way to keep my mind off of the growing pit of dread in my stomach."

"Draw Me Tyler" is just one of the many ways that cartoonists, painters, sketchers and many other artists have taken creative action to protest against a Trump presidency, as well as support people of all identities throughout the election — particularly those whom Trump made offensive remarks toward during his campaign. While Feder is open to fulfilling any drawing requests from people of marginalized communities, she tries to pay particular attention to people who identify as being marginalized in more than one way, such as a disabled black woman or a Muslim lesbian woman.

"I generally benefit from a lot of privileges, but I am Jewish and female, so the anti-semitism and blatant sexism in this campaign have been really scary for me," Feder tells Bustle. "I've been trying to represent as many Muslim women as I can to show solidarity from one targeted religion to another."

To date, Feder has drawn 60 portraits out of nearly 1,000 drawing requests, including drawings of couples, siblings, and individuals. Many of the people in her portraits are often portrayed with their eyes closed or simply looking down, Feder's unique artistic signature. "I like how it looks aesthetically, and I find it makes portraits look peaceful," writes Feder, who uses a Wacom Bamboo graphics tablet in a program similar to Photoshop, Acorn to create her illustrations.

For now, Feder plans to continue the project as long as it's logistically possible, even if that means carving out additional time to draw in a portrait or two. "I hope people are able to derive some amount of comfort from my project. My goal is to remind people that they matter, even if our elected officials might say otherwise," she writes.

To see the rest of Feder's "Draw Me Tyler" project, view her Instagram here.