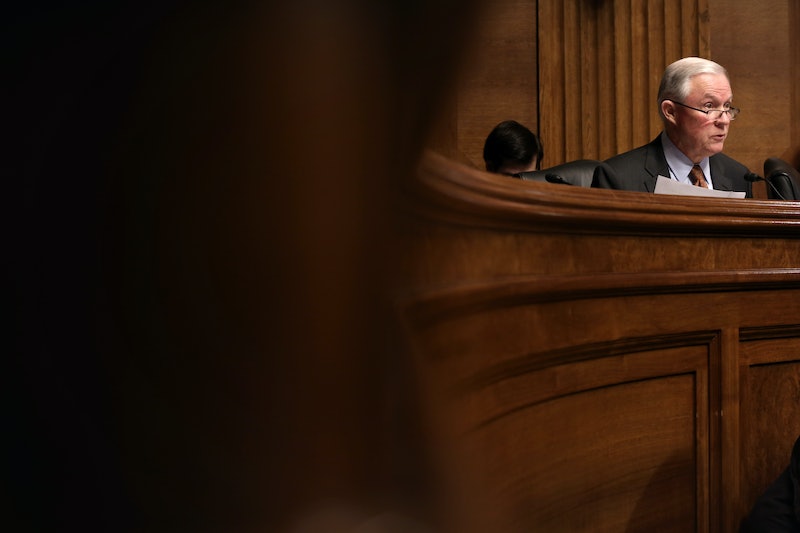 A man deemed potentially too racist to be a federal judge 30 years ago was selected to serve as U.S. attorney general by President-elect Donald Trump Friday. Trump's transition team confirmed Friday that Alabama Senator Jeff Sessions was being selected for attorney general of the United States. For anyone even slightly concerned about the news that a man Department of Justice lawyers once testified against is now being nominated to oversee the agency, take some comfort in the fact that things aren't official, yet. While Sessions may be Trump's pick for U.S. attorney general, he can't step into the role without the Senate's approval.

While it might be rare for the Senate to reject one of its own, it wouldn't be unprecedented. In 1989, the Senate rejected George H.W. Bush's nomination of Texas Senator John Tower as secretary of defense amid allegations of heavy drinking and womanizing. Moreover, Sessions was passed on by a Republican-controlled Senate before. In 1986, when Sessions was nominated for a federal judgeship, his Senate confirmation hearing ended in his rejection after legislatures examined several allegations Sessions had made racist remarks while working as a U.S. attorney in Alabama. Sessions has denied these allegations.

Gerry Hebert, a lawyer from the Department of Justice's civil rights division testified before Congress and alleged that Sessions had called the NAACP and the American Civil Liberties Union (ACLU) "un-American" and "communist-inspired." It was also alleged that Sessions had joked about being "OK" with the Ku Klux Klan until he'd learned "they smoked marijuana" after a meeting and agreed with someone's comment that Jim Blacksher, a white civil rights lawyer, was "a disgrace to his race" for trying voting rights cases. Thomas Figures, then an African-American assistant attorney, testified that Sessions had called him "boy."

Although Sessions apologized for his remark about the KKK, he claimed it was a joke taken out of context. He also denied accusations that he had not pursued civil rights cases fully while working as a U.S. attorney in an interview with the National Journal in 2009. "I am absolutely a firm supporter of equal rights for every American," he said. "I always have been and I always will be. ... I signed 10 pleadings attacking segregation or the remnants of segregation, where we as part of the Department of Justice, we sought desegregation remedies." Sessions claimed his experience coming before the Senate Judiciary Committee in 1986 had taught him "that a nominee can be unfairly abused."

"You're up there and they throw out somebody on the committee or otherwise make some charge and you don't have a very good opportunity to rebut it," he said.

While allegations of racism kept Sessions from the federal judgeship he'd been nominated to, his home state of Alabama made him state attorney general and later, a senator.

Sessions was the first senator to support Trump's presidential campaign and is said to have influenced his immigration, counterterrorism, and trade policies. While news of Sessions' nomination sparked immediate disapproval among those familiar with the allegations of racism that have plagued him throughout his career, Trump is, according to a statement from his transition team, "unbelievably impressed" with the Alabama senator.

Yet several civil rights groups are decidedly less impressed with Sessions. "The handful of people who might be even less equipped than Jeff Sessions to dispense justice on behalf of the American people typically spend their weekends wearing pointy hats and burning crosses," a statement from Democracy for America said, according to the Washington Post. "The idea that Jeff Sessions might become Attorney General is a genuine threat to our country and the lives and safety of people of color, Muslim Americans, women, and working families. We urge Democrats in the U.S. Senate to do everything in their power to air Jeff Session’s record of bigotry and derail his confirmation as Republicans work to jam it through."

People for the American Way issued a similar call for the Senate to reject Sessions' nomination in a statement that read, "In the last 30 years, Sessions has done nothing that demonstrates that the Senate's judgment was incorrect or that he’s learned from his mistakes. Instead, he’s spent years making a name for himself as one of the Senate’s most extreme anti-immigrant voices, even attacking the Constitution’s guarantee of birthright citizenship. ... The Senate should reject this nomination." America's Voice, a pro-immigration group, has also urged the Senate to oppose Trump's decision to nominate Sessions for U.S. attorney general.

While dozens of advocacy and civil rights groups may come out to vocally oppose Sessions' nomination, the real question, however, is how will the Senate take the news. Before Sessions' nomination comes to a vote on the Senate floor it will be mulled over by the Senate Judiciary Committee, a committee Sessions has long been a senior member of. Although Sessions is proving to be a controversial pick, Republican senators may coalesce behind him with their 52-48 majority should he get the nod from the Senate Judiciary Committee. According to Politico, Senate Judiciary Chairman Chuck Grassley claimed Sessions' history as a committee member was a good omen for his confirmation.

However, fellow committee member Senator Chuck Schumer appeared more hesitant to immediately thrown his support behind Sessions. "The fact that he is a senator does not absolve him from answering tough questions in the confirmation process," Schumer said, according to the Washington Post. "Given some of his past statements and his staunch opposition to immigration reform, I am very concerned about what he would do with the Civil Rights Division at the Department of Justice and want to hear what he has to say."

Other Democratic Senate Judiciary Committee members expressed an openness to reviewing Sessions' nomination but refrained from commenting on Sessions' past. Senator Dianne Feinstein said Friday she was "committed to a full and fair process" but stressed — without comment on Sessions — that "the attorney general's honesty, integrity, and willingness to enforce the law in an even-handed manner are all vital to be effective in this position. ... The attorney general is the lawyer for the people, not the president. His or her primary loyalty must be to the Constitution and the rule of law — and sometimes that means telling the president no."

While it's unclear exactly when Sessions will come before the Senate Judiciary Committee, a confirmation hearing will likely be scheduled for sometime in early 2017.