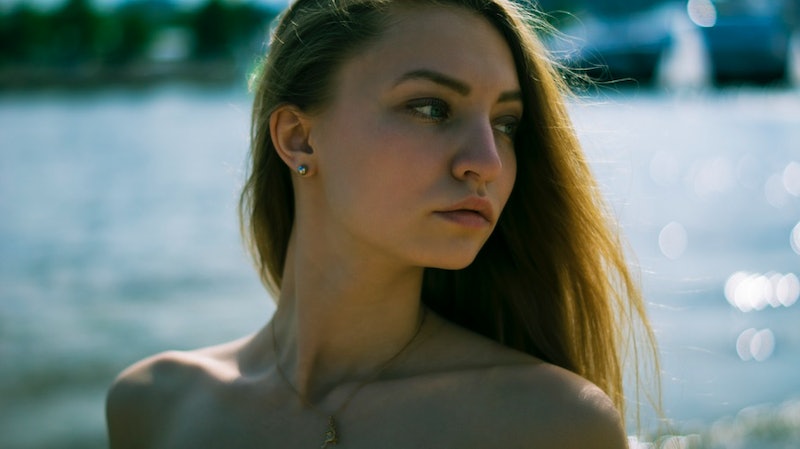 If you're like everybody else in the world, you probably hope to always be the best version of yourself. You most likely want to make the right decisions and feel confident doing so. However, with those aspirations sometimes come with a side order of self-criticism. Overly criticizing yourself can dramatically affect your self-confidence and cause you to think poorly of yourself and others around you. Being overly critical can manipulate your thoughts to be more cynical, which in the long run can prevent you from enjoying the things that once made you happy.

"It all starts with our thoughts. Though we might not outwardly seem like a critical person, our inner thoughts and feelings may be telling a very different story. The problem is we don’t usually hear the majority of the estimated 60,000 thoughts we humans have each day. These 'automatic thoughts' can create negative feelings that eventually can lead to behaviors that aren’t pretty," says clinical psychologist, speaker, and founder of the AZ Postpartum Wellness Coalition Christina G. Hibbert, Psy.D. in an interview with Bustle over email.

What's one way you can stop being an overly critical person? "First, we need to stop and notice what we’re thinking. Are you criticizing others’ looks, words, actions on a regular basis? Do you hear thoughts like, 'That person is so____(fill in the negative word),' or 'I can’t stand how they ____'? Because the truth is, whether you say them or not, if you’re finding loads of criticisms in your thinking, then you’re an overly critical person. The good thing is, with work, you can stop, hear, challenge and choose to change those critical thoughts into something more in line with who you really want to be," continues Hibbert.

While it's always a good idea to push yourself to become a better person, you don't want to think poorly of yourself when things don't go the way you want them to — because you got better things to do, right? But just in case you need a reality check, here are nine ways to know if you're an overly critical person.

1. You Constantly Second-Guess Yourself

Being an overly critical person doesn't just mean you're constantly judging others. It also entails you're being critical of yourself. "'Did I do that right?' 'I don't think that was the right answer...' 'I must be a failure!' If these internal thoughts are both normal and exceedingly familiar to you, over and over, there's a chance you're probably not trusting yourself. Some doubt and self-reflection is necessary, in small doses — any more than that, and it's no longer productive as a reality check; it's another tried-and-true way to beat yourself up," says psychotherapist and LGBT+ affirmative counselor Kristen Martinez, M.Ed., Ed.S., LMHCA, NCC in an interview with Bustle over email.

"Accepting your actions, feelings, and thoughts, and owning them, are the first steps toward trusting your own perspective as valid and real. When you give something your best shot, you know that you are enough and you did the best that you could, and whatever happens will happen; no self-criticism will change that in the end, so it probably isn't worth it to keep harping on yourself," continues Martinez.

2. You Pick Yourself (And Everyone Else) Apart

Usually people love to surround themselves with others who lift them up and make them feel good. While it's important to be honest in most relationships, that doesn't give you an excuse to pick others (and yourself!) apart. "When you're overly critical, you are your own worst enemy, as well as everyone else's! Your relationships may suffer from your constant complaining and negativity; your friends and family may not want to surround themselves with this toxicity, especially if they could be next in line to be judged. Chances are, most everyone is fully aware of their own perceived flaws (whether they're correct or not), so it probably isn't too helpful for you to keep pointing them out," says Martinez.

3. You Don't Enjoy Anything

There's no way for you to enjoy your life if you take it too seriously. You should try to lighten up and be mindful of all of good things that are happening in your life instead of focusing on the bad. "You aren't able to spend time with your SO without nagging them about something they forgot to do or did wrong, even while they're taking you out to a nice restaurant for your anniversary. When you're focusing on what's wrong, you are likely to find it, which causes you to search out any situation for its wrongness; this is what is called a confirmation bias (kind of like Murphy's Law). Consequently, of course, you never notice when things are going right and well," says Martinez.

4. Nothing Is Good Enough For You

Being a highly critical person means you expect the world from your loved ones. You want them to constantly go above and beyond for you and get offended when your ideal situation doesn't come to fruition. "It's hard to be satisfied with anything when your bar for yourself — and for others in your life — is so extraordinarily high. Sure, it's good to be motivated and to want to excel and not settle for things that aren't good enough for you, but when you can't put a limit on this, there's a problem. Looking at the world from a place of scarcity means that there will never be enough for you to be happy," says Martinez.

5. You Can't Take A Compliment

You're probably not going to say "thank you" when someone gives you a compliment if think very critical of yourself. But when you don't accept a compliment, you could be fueling your negative mindset and lack of confidence. "When someone compliments you, it usually sounds absurd or preposterous. 'You like this dress?! I just spilled my latte on it this morning — it looks horrible, can't you see?' When you're deflecting or dismissing genuine compliments from others, it sets the tone that (A) you're not interested in or don't value hearing feedback from others; (B) you can't ever see yourself in a positive light; and (C) there's no room for any alternative interpretation, other than your own (inherently negative) one," says Martinez.

6. You Worry That If You Stop Putting Yourself Down, The World May Fall Apart

Constantly being hard on yourself is not going to get you far in life. Actually, it could prevent you from being the best version of yourself. If you're not careful, you might start believing that you deserve negative situations (i.e. like getting fired or broken up with by your SO) to happen to you — which, of course, is not true at all. "[Putting yourself down] is the only way that you know how to relate to yourself; it has been passed down to you from generation to generation, and you've breathed it in from our culture, which values beating yourself up as a way to help you move forward and do better. The problem is, it's incorrect," says Martinez.

"Somehow, though, you think that it helps you to be a better person by being overly critical, and you worry about discarding this habit: 'Will I spiral out of control?' 'Will I be even worse than my worst nightmares?' Probably not. Tons and tons of research prove time and time again that when we look at ourselves and treat ourselves with compassion and love, we are more well-equipped to do better next time, and can have better relationships both with ourselves and our loved ones," continues Martinez.

You're probably always in a mood because nobody does what you think they should do and nothing is going right. It's hard to feel happiness when you're not present in your life and constantly assume the worst out of those closest around you. "If you’re snippy and easy to anger, it may be due to having a critical take on most things, including yourself," says psychotherapist and author Karen R. Koenig M.Ed., L.C.S.W., in an interview with Bustle over email.

8. You Complain All The Time

If you're constantly being critical of others and yourself in your mind, you're probably voicing these thoughts and opinions to your friends and family, which means others around you are aware of your negative mindset. "People often tell you or imply that you’re a downer or a pessimist. They may say things to you like, 'Lighten up' or even 'Why do you always look for the worst in others?' This may be due to you seeing the negatives rather than the positives in life," says Koenig.

9. You Avoid Expressing Your Opinion

According to Physcology Today, Loretta G. Breuning, Ph.D. said, "What if you say something stupid? Perhaps you think you are boring, or not informed enough to debate with [a] certain company. It's smart not to stand out as informed when you know very little about a specific subject, but if you behave the same way in the company of people who are of equal or even lesser knowledge, then you are probably engaged in self-criticism when you force yourself to hold back."

When you're overly critical of yourself and others, you can allow yourself to thrive in a negative mental environment. While you always want to push yourself to become a better person (because, honestly, who doesn't want that?) doesn't mean you should beat yourself up over it. If you find yourself doing a lot of these signs, start to change your habits ASAP, so you can love yourself and live a more positive life.

More like this
These Are The 3 Most Mellow Zodiac Signs
By Kristine Fellizar
Emily Ratajkowski & Pete Davidson's Astrological Compatibility, Revealed
By Nina Kahn
14 Easy Ways To Find Joy During The Holidays
By Carolyn Steber
This Company Will Send STI Tests Right To Your Door
By Lexi Inks
Get Even More From Bustle — Sign Up For The Newsletter