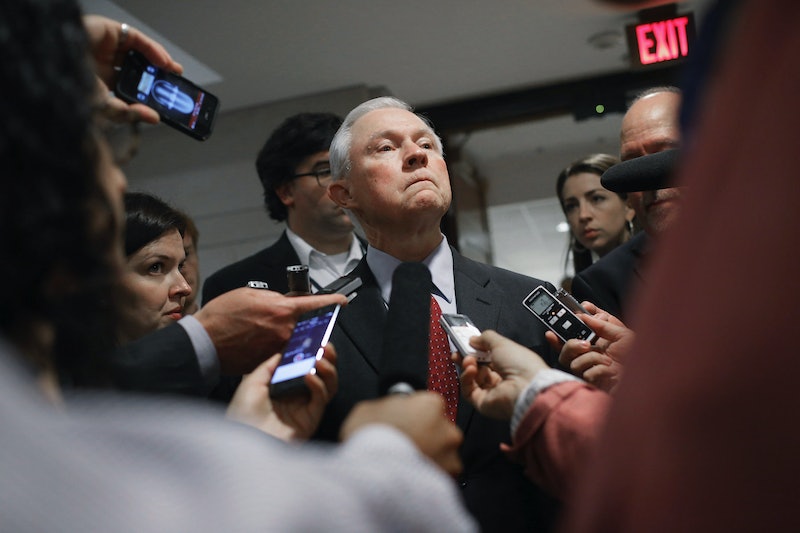 On Friday, news broke that Sen. Jefferson Beauregard Sessions was nominated to be President-elect Donald Trump's Attorney General. Backlash has been swift. Sessions was previously rejected as a U.S. District Court nominee because of disturbing allegations of racism (which he had denied or said were taken out of context). Unlike the appointment of Steve Bannon to Trump's advisory board, Sessions will have to be confirmed by the Senate in order to take office. As a result, many people have begun calling senators about opposing Sessions' nomination, though the GOP majority in the Senate makes a Sessions confirmation likely.

Whatever the odds, if you don't want an Attorney General who believes that the Voting Rights Act is "intrusive legislation," allegedly claimed that he wished he could decline all civil rights cases, and openly opposes birthright citizenship, you must contact your elected representatives — whatever their political party — to voice your concerns. A former congressional staffer took to Twitter in the days after the election to explain exactly why it's so important to call instead of write.

If there's one thing that older generations love to make fun of younger people for, it's that millennials hate talking on the phone. I get it — the texting and internet generation has much less practice with that method of communication than those who came before us, so important phone calls can seem particularly daunting. Positive millennial stereotypes come into play now as well, though. For example, our generation really cares about social justice, and if there was ever a time for that passion, it's now.

Calling your senators and other elected representatives is easier than ever before. In just a few minutes, you can make your voice heard.

Find Out Who Your Senators Are

The official U.S. Senate contact website helps you search by state for your senator and includes the phone number for their Washington, D.C. office, though you can reach your senator at any of his or her local offices, as well.

If you live in one of the six states to elect a new senator for the coming year — Illinois, Indiana, California, Nevada, Maryland, and New Hampshire — you can find the name of your new senator here. Louisiana will also be getting a new senator, but that runoff election has not occurred yet.

Figure Out Where To Call

I recommend reaching out to your senator at one of his or her district offices. It does not have to be the office closest to you — for example, if you live in New York City, you can reach your senators at their offices in Buffalo, Rochester, Syracuse, etc.

You can find the number through your senator's website, which can be found in their listings on the U.S. directory linked above.

Figure Out What To Say

I've included a script here as a suggestion, but I recommend doing your own research to figure out the specific reasons that you oppose Sessions:

Good afternoon. My name is (NAME) and I am a resident of (CITY) and a constituent of the senator's. I am calling today to voice my opposition to the nomination of Jeff Sessions to the position of attorney general. Senator Sessions has indicated that he finds the Voting Rights Act "intrusive," and I very seriously doubt his commitment to promoting equal rights among all Americans. I urge Sen. (NAME) to oppose his nomination and to call on his/her colleagues to do the same.

Make The Call, Even If You're Nervous

If you need to, review a list of tips and tricks for conquering phone anxiety, or watch an anti-anxiety YouTube video like the one above. Read through your script and practice it out loud, if you need to. Remember why you're making the call in the first place, and start dialing! It will be over before you know it, and you will have taken an important step in making your voice heard.