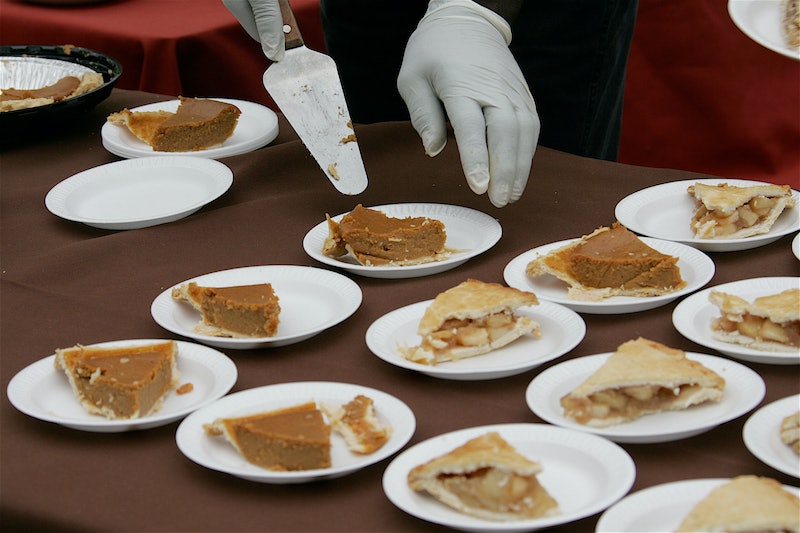 Thanksgiving is supposed to be a time to gather together with family and express gratitude. But for many of us, it's also a time when we spend most of our energy trying to avoid those unpleasant topics where our families disagree with us. The most obvious example, of course, is politics. And as many of us head from liberal areas to conservative ones (and vice versa), the temptation to stick to sports and the weather is almost overwhelming. This year, though, talking about politics over Thanksgiving is more important than ever, even though it may be uncomfortable for many of us.

American culture preaches a certain amount of polite disengagement from uncomfortable topics. The internet is rife with guides about how to avoid talking about politics, for example. However, considering that about half of eligible voters didn't vote this past election, according to the United States Election Project, it may be worth it to remind your relatives about the issues that matter to you.

In general, I think that learning from others' viewpoints and challenging your own is a critical part of self-development. I am not suggesting that you spend your Thanksgiving screaming at your uncle about his Make America Great Again hat, but I do recommend spending time with your relatives who aren't very involved with politics and explaining why you care about the direction of the country.

Of course, if things get too hairy, there's always Adele...

If you do want to tackle conversation with a relative who explicitly disagrees with you, The New York Times published a helpful guide to talking politics at Thanksgiving. Whether you speak with your Trump-supporting relatives or just your nonvoting ones, though, here's why I believe those conversations are worth having.

1. You Can Explain Why Issues Matter to You

A recent viral post on Humans of New York featured a man from a Michigan county which voted decisively for Donald Trump. He didn't believe that racism was still a problem in the United States, apparently because he hadn't experienced it himself. That post, in my opinion, illuminates a greater problem, which is that people who are not themselves victims of a given prejudice — sexism, racism, homophobia, etc. — often have a hard time putting themselves in someone else's shoes. Talking to your relatives can be a good way to use your experiences and your friends' experiences as tangible examples of an issue that may be invisible to them. I try, for example, to speak to my male relatives when I encounter sexism, because I think it's important to show them how my experience is different from theirs.

2. You Can Show Them How You'll Be Affected

This is not limited to explaining prejudice to people who do not experience it. If you have anything to lose after Inauguration Day, explain that to your relatives. If you have health insurance under the Affordable Care Act, tell your relatives what a repeal would do to you. If you are in danger of losing time-and-a-half overtime pay, talk that through with your relatives. They might be on the cusp of experiencing the same problem without even realizing it.

3. You Can Help Combat Fake News

If your relatives tend to describe "news" stories that often seem too good or bad to be true, they may be getting their news primarily from discredited websites. A Massachusetts college professor compiled a list of over 100 fake news websites, many of which are among the most common sources for articles I see shared on my timeline. The list includes both left-leaning and right-leaning websites. Before meeting up with family this Thanksgiving, I recommend taking a look at those sites and learning the real facts behind what they claim to report. If you want to dive even deeper, BuzzFeed did an extensive investigation into these sites, and found that some are created by Macedonian teenagers as a way to make extra money. So the next time your cousin tries to tell you that he's sure Hillary Clinton was secretly indicted by the FBI in 2015, you can show him where his favorite websites are actually getting their news.

4. You Can Answer Questions Your Relatives May Have

Some people opt out of following politics purely because all of the issues seem so complicated. Others accept pat explanations for issues that really are complicated, like those who believe climate change isn't real because winter's still cold and summer's still hot. And both groups can often be persuaded to change their minds if their questions are actually answered.

For example, I've heard people challenge opposition to the appointments of Steve Bannon and Jeff Sessions simply by saying, "No, they're not racist. Why do people think they're racist?" I recommend trying to anticipate questions your relatives might have and finding answers on your own that you can share at Thanksgiving.

5. You Can Find Ways to Make a Difference Together

If you and your relatives agree on politics — or even have just one point of agreement — spend some time talking about ways you can work together to make a difference on that issue. For example, if you're concerned about economic problems faced by other families in your area, spend Black Friday donating winter clothing to a shelter or Goodwill. If you both benefit from the Affordable Care Act, participate in House Speaker Paul Ryan's survey to voice your concerns.

Having political conversations with friends and family around the holidays can be tough, but if you're willing to try, you may be able to change minds and even grow closer to your relatives.