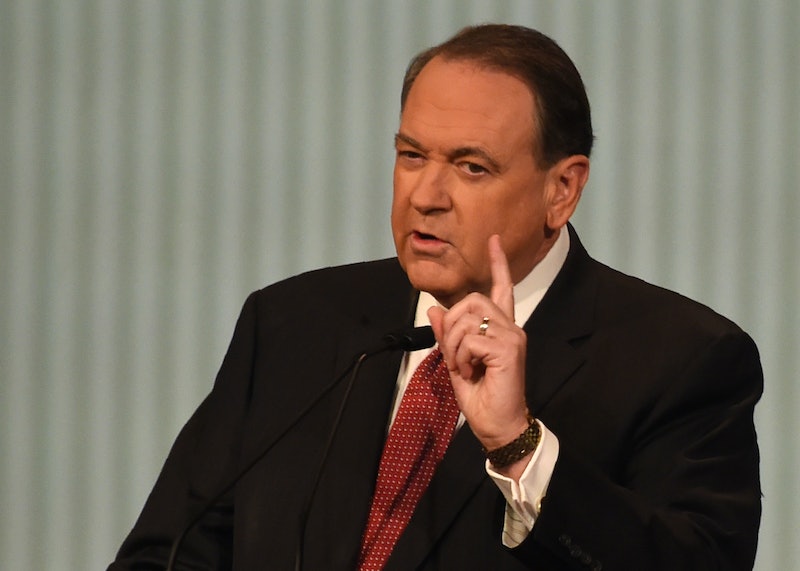 Former Arkansas Gov. Mike Huckabee is back in the news again. And if his meetings at Trump Tower are any indication, the world may soon be hearing from Huckabee a lot more. While it's still unclear if President-elect Donald Trump will actually name his former competitor to a position within his administration, Huckabee's rhetoric toward women is worth reexamining in case he lands himself a new gig at the White House.

Huckabee was quick to deny reports Donald Trump had chosen him as his ambassador to Israel in a brief statement Friday. "Media buzz that I was named Amb to Israel is NOT true," he tweeted. "Was never discussed with PE Trump; slot probably not picked until State Dept in place." Huckabee refrained from commenting on whether or not the president-elect was considering him for another position.

In general, the list of inane, offensive, or just downright bizarre things to have come from the former Arkansas governor's mouth during the course of his career in politics is long. A bit too long, if you ask me. But with Huckabee back in the political spotlight — and potentially set to stay there for the next four years — there's just cause for taking another look at some of the things he's had to say about women over the years.

Here are eight things Huckabee has had to say about women:

His Argument That Women Use Birth Control To Control Their Libidos

On Jan. 23, 2014, Huckabee insinuated that women who use birth control were incapable of controlling their libidos in a speech to Republican National Committee members.

"If the Democrats want to insult the women of America by making them believe that they are helpless without Uncle Sugar coming in and providing for them a prescription each month for birth control because they cannot control their libido, then so be it, let's take that discussion all across America because women are far more than Democrats have made them to be," he said.

His Absurd Generalization Of Single Moms

In 2011, a pregnant and unmarried Natalie Portman seemed to rub Huckabee the wrong way and cause him to make some concerning generalizations about single mothers. "Most single moms are very poor, uneducated, can’t get a job, and if it weren’t for government assistance, their kids would be starving to death and never have health care," he said while speaking on a conservative radio show hosted by Michael Medved. "It's unfortunate that we glorify and glamorize the idea of out-of-wedlock children."

His Claim Beyoncé Has A Pimp, Not A Husband

For reasons I've still yet to understand, Huckabee dives into both Beyoncé and Jay Z's marriage and 2014 Grammy Awards show performance in his book, Gods, Guns, Grits and Gravy. "Beyoncé is incredibly talented — gifted, in fact," he writes. "She has an exceptional set of pipes and can actually sing. She is a terrific dancer — without the explicit moves best left for the privacy of her bedroom. Jay Z is a very shrewd businessman, but I wonder: Does it occur to him that he is arguably crossing the line from husband to pimp by exploiting his wife as a sex object?"

His Tweets About Hillary Clinton On Election Night

I get that an election is a contest and Huckabee was reveling in being on the winning side, but a fat joke? Really?

His Comparison Between Pro-Choice Activists And Slavery Supporters

At a pro-life rally held at in Texas, Huckabee compared abortion to slavery and pro-choice activists to supporters of slavery, asking how society can reject the notion of slavery but "come to the conclusion that one person can take the life of another person."

His Likening Of Abortion To The Holocaust

In February 2013, Huckabee called abortion "this incredible Holocaust of our own in America" during a keynote speech at a Celebrate Life event hosted by the Republican Party of Iowa. "Fifty-five million babies since 1973 have died in what ought to be the safest place in the world, their mother’s womb. It has become one of the most dangerous places for a baby to be."

How Far He'd Go To Keep Women From Getting Abortions

While campaigning in 2015, Huckabee said he wouldn't be opposed of violating the Supreme Court's ruling on Roe v. Wade to end abortion if president. "I will not pretend there is nothing we can do to stop this," Huckabee said. When was later asked if he would use the national guard or FBI, Huckabee said ominously, "We'll see, if I get to be president."

His Claim Women Who Curse Are Trashy

While speaking on the radio show Mickelson in the Morning in 2015, Huckabee criticized women who curse, calling them "trashy." "In a business meeting that you might have in the South or in the Midwest there in Iowa, you would not have people who would just throw the F-bomb and use gratuitous profanity in a professional setting," he said. "In New York, not only do the men do it, but the women do it! And you just are looking around, saying, 'My gosh, this is worse than locker-room talk.' This would be considered totally inappropriate to say these things in front of a woman. And for a woman to say them in a professional setting... as we would say in the South, that's just trashy."

While Huckabee may have claimed to be waging a war for women, it seems clear to me that the man may want to rethink his rhetoric a bit more as many of his statements on women are cringe-worthy.