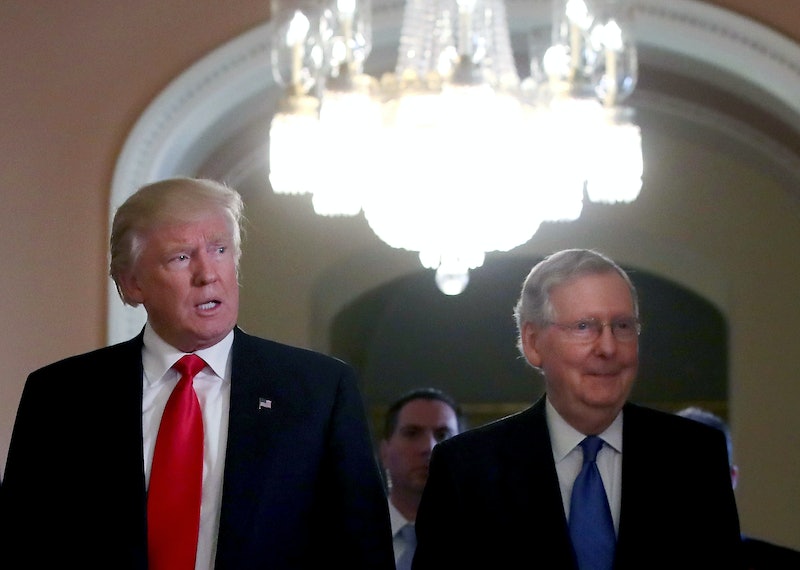 Although Donald Trump is president-elect, his agenda won’t go anywhere if Congress doesn’t cooperate, and whether or not Congress cooperates will depend largely on the filibuster. The filibuster is a widely-hated parliamentary mechanism by which, in certain circumstances, a minority of senators can block the actions of the majority. But now that it controls all three branches of government, will the GOP eliminate the filibuster entirely, thus rendering Senate Democrats irrelevant?

First, a bit on how the filibuster works. In theory, things like bills and judicial appointments can pass the Senate if 51 senators or more — a majority — vote for them. However, the filibuster is a loophole that allows as few as 41 senators to veto the majority by holding up debate on a bill or appointment indefinitely. It used to be a rarely-used procedure, but Sen. Majority Leader Mitch McConnell made it a regular practice during President Obama’s administration, thus preventing things like gun control and climate change regulations from passing the Senate.

But the party that controls the Senate gets to set the filibuster rules, and in 2013, then-Sen. Majority Leader Harry Reid took the unprecedented step of eliminating the filibuster for most judicial nominees. This meant that judges appointed by President Obama would only require a bare majority to pass. However, Reid retained the minority’s ability to use the filibuster against Supreme Court nominees and legislation.

This brings us to where we are now. Because Republicans will soon control the White House, the Senate and the House of Representatives, the filibuster will be one of the only tools Democrats have to affect the course of the country. Senate Republicans, in turn, are thinking about eliminating the filibuster — either for Supreme Court nominees, legislation, or both — in order to prevent Senate Democrats from having any influence on anything.

Will it happen? It’s premature to be too confident one way or another, but right now, it seems unlikely. The absolute minimum number of senators whose votes are required to eliminate the filibuster is 51, and Republicans will control 52 seats at the start of the next Congress. This means that if a mere two GOP senators object to ending the filibuster, the filibuster will stay.

And wouldn’t you know it: As of this writing, no less than four Senate Republicans have said that they want to keep the filibuster. Two of them were unequivocal: Lindsay Graham said that getting rid of the procedure would be a “horrible, terrible idea,” while Utah’s Orrin Hatch called himself “one of the biggest advocates for the filibuster.”

“Are you kidding?” Hatch told the Huffington Post when asked if he’d consider nuking the filibuster. “It’s the only way to protect the minority, and [Republicans have] been in the minority a lot more than we’ve been in the majority. It’s just a great, great protection for the minority.”

In addition to Hatch and Graham, Republican Sens. Jeff Flake and James Inhofe have also signaled that they want to keep the filibuster, though they weren’t quite as forceful in their comments as Graham and Hatch.

You may be asking yourself: Why would any Republican oppose ending the filibuster? Wouldn’t they themselves have more power if the filibuster was gone? In the short term, yes. But Senate majorities come and go, and Republicans know full well that at some point, they’ll be in the minority once again, and will thus have use for the filibuster.

More broadly speaking, U.S. senators tend to have a reverence for the body’s rules and traditions that borders on worship (the late Sen. Robert Byrd wrote a four-volume history of the body just for kicks), and they're extremely reluctant to make significant changes to those rules. Reid only altered the filibuster after four years of relentless GOP obstruction, and even then, the scope of his changes was limited. The filibuster is one of the biggest things that distinguishes the Senate from the House of Representatives, where bills need only a bare majority to pass, and the prospect of making the Senate more like the House is a prospect that many senators, regardless of party, find horrifying.

These are just some of the reasons why Democrats never got rid of the filibuster when they were in the majority, and why Republicans are unlikely to do so now. Of course, this could all change rather quickly: If Democrats were to filibuster a series of Republican bills in the first few months of Trump’s presidency, for instance, guys like Hatch and Graham might change their tune on the practice. As of now, however, the filibuster seems likely to stay.