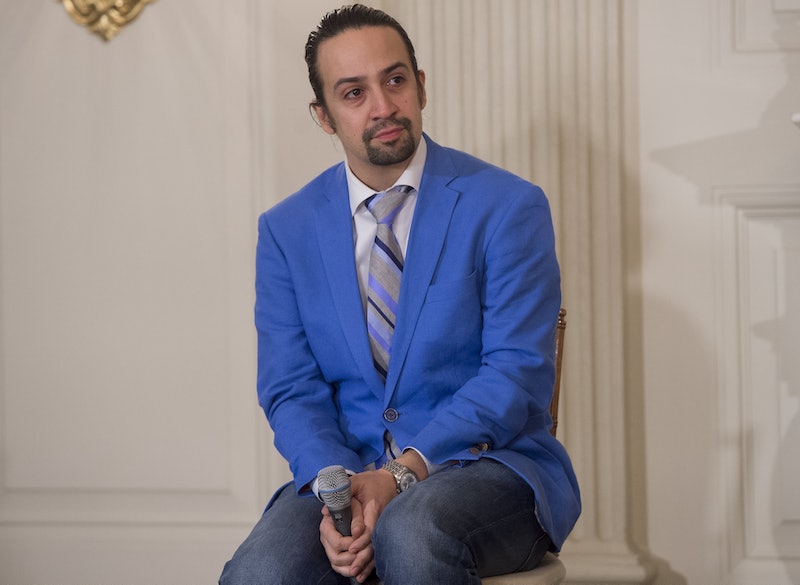 During a Nov. 18 performance of the hit musical Hamilton, Vice President-elect Mike Pence was in the audience. He may have gone largely unnoticed by many of the other audience members, until actor Brandon Victor Dixon (who plays Aaron Burr, our nation's third vice president) read a statement directly addressing Pence after the show ended. Of course Pence's right-hand man Donald Trump responded to the Hamilton cast's message, and in true Trump fashion, it was a frustrating and misleading response.

Pence is openly a staunch conservative whose views and policies often aren't helpful to, well, anyone who doesn't look or identify like him. His stance on abortion is about as bad as it gets in 2016, and his policies have made Indiana one of the most restrictive states in the U.S. for women's reproductive access. He's been quiet on racial issues and his anti-LGBTQ policies (including once supporting gay conversion therapy) are discriminatory.

With all of this in mind, actor Dixon used the stage to address Pence in a peaceful and polite way before everyone left. "We, sir, are the diverse America who are alarmed and anxious that your new administration will not protect us, our planet, our children, our parents, or defend us and uphold our inalienable rights," Dixon said. "We truly hope this show has inspired you to uphold our American values and work on behalf of all of us. All of us."

Although Dixon told the audience not to boo, they inevitably did, and because of this, Donald Trump was not happy.

I'm not sure if Trump actually watched the video of Dixon's speech, but if he did he would know that it was certainly not harassment, as he characterized it. Furthermore, Trump said the cast was "very rude" to Pence, which, again, if you watch the video isn't necessarily true. Dixon explicitly told the audience there was nothing to boo because it wasn't a mean message; rather, Dixon used an opportunity to share with Pence his concerns that, as vice president, he wouldn't value or consider the issues important to the many diverse people of our country — best reflected in the cast of Hamilton.

Instead of considering the message that Dixon sent to Pence (who walked out of the theater before the message ended), he used Twitter to demand an apology from the cast. It was a misleading response because, as aforementioned, Dixon told the audience not to boo and his delivery was respectful — it was neither accusatory nor harassment. Further, it's frustrating because Trump could have responded by arguing that of course our next vice president will represent all people from all "colors, creeds, and orientations," as Dixon put it.

But Trump opted to blindly stand by Pence and refused to acknowledge the larger (important) message that Dixon was trying to spread.