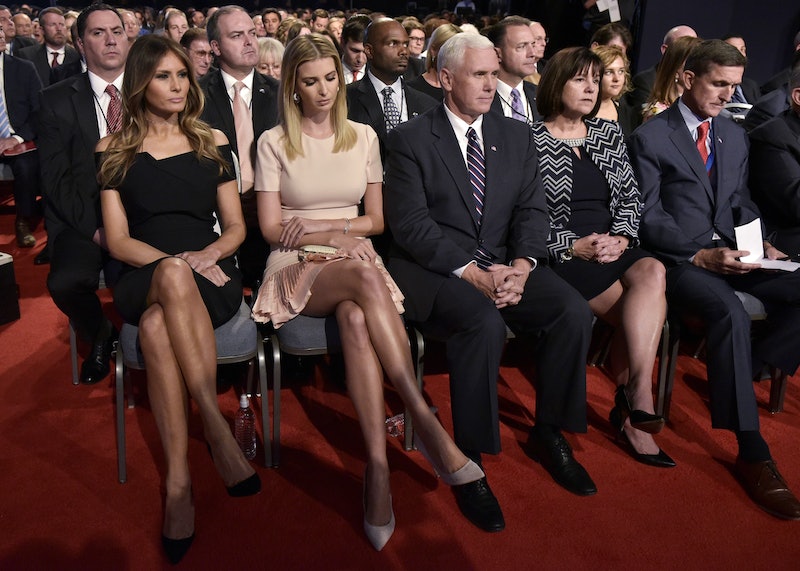 America's new vice president-elect found himself unexpectedly (although not surprisingly) thrust into a very different kind of spotlight Friday evening. While he may have hoped his attendance at a showing of Lin-Manuel Miranda's Tony Award-winning musical on Nov. 18 would go relatively unnoticed, the cast of Hamilton had a message for Mike Pence.

Brandon Victor Dixon, the actor who portrays Aaron Burr, took a few moments at the end of the night's performance to speak directly to Pence with a curtain-call speech imploring the newly elected vice president to work on behalf of all Americans.

President-elect Donald Trump later accused the cast of Hamilton of being "very rude" and took to Twitter to demand an apology. "The Theater must always be a safe and special place," Trump tweeted Nov. 19. "The cast of Hamilton was very rude last night to a very good man, Mike Pence. Apologize!"

Trump accused the Hamilton cast of harassing Pence and seemed to imply they shouldn't have exercised their First Amendment rights. "Our wonderful future V.P. Mike Pence was harassed last night at the theater by the cast of Hamilton, cameras blazing," he tweeted in a separate message. "This should not happen!"

For the cast of Hamilton, however, an opportunity to share their thoughts and concerns regarding Trump's future White House administration was too good an opportunity to pass up. "These are the opportunities that you die for," Dixon told Broadway.com. "If you have differences, say something! What better place than on this stage telling this story with these people? I hope he thinks of us every time he has to deal with an issue or talk about a bill or present anything."

Here's the transcript of what Dixon said to the new vice president-elect on behalf of the Hamilton cast:

We have a message for you, sir. We hope that you will hear us out. And I encourage everybody to pull out your phones and tweet and post because this message needs to be spread far and wide, OK?

Vice President-elect Pence, we welcome you and we truly thank you for joining us here at Hamilton: An American Musical, we really do. We, sir, we are the diverse America who are alarmed and anxious that your new administration will not protect us — our planet, our children, our parents — or defend us and uphold our inalienable rights, sir. But we truly hope that this show has inspired you to uphold our American values and to work on behalf of all of us. All of us.

Again, we truly thank you for sharing this show. This wonderful American story told by a diverse group of men [and] women of different colors, creeds, and orientations.

The statement, which doesn't seem "very rude" to me, was written jointly by Miranda, Hamilton's director Thomas Kail, and lead producer, Jeffrey Seller, according to the New York Times.

More like this
'The Capture' Is Finally Back – & S2 Looks Tense AF
By Sophie McEvoy and El Hunt
The Lionesses Are Calling For Equal Access To Football In Schools
By Sophie McEvoy
Christina Aguilera Took A Powerful Stand At Brighton Pride
By Sam Ramsden
Are John Legend & Kanye West Still Friends? The Singer’s Latest Update Is Candid
By Brad Witter
Get Even More From Bustle — Sign Up For The Newsletter