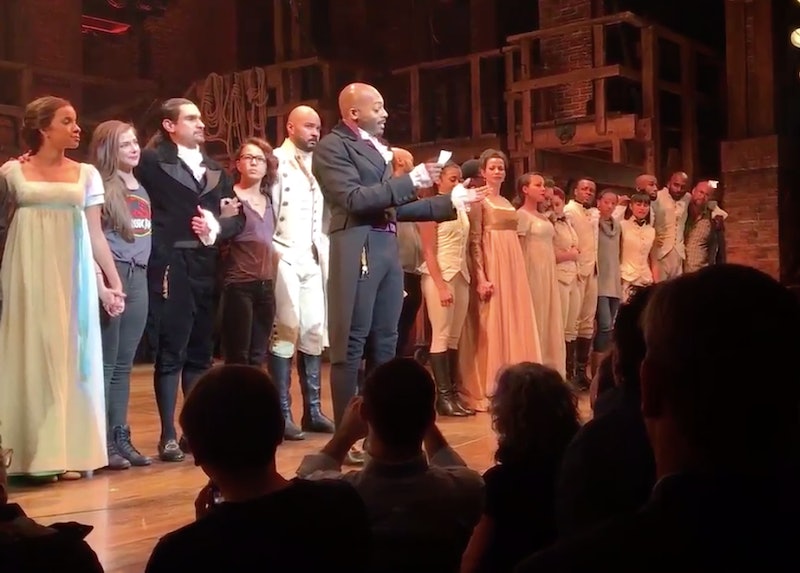 The Broadway phenomenon about Alexander Hamilton and a group of colonial rebels got political post-curtain call after a performance ran on Friday night. As Vice President-elect Mike Pence attended this Hamilton showing, the cast used his presence as a way to make a bold and hopeful statement. After the show closed, Brandon Victor Dixon — the actor who plays Aaron Burr — addressed Pence and thanked him for attending. He even encouraged the audience to take out their phones, so the message could spread. “We hope that you will hear us out," he began.

Dixon, with the cast of Hamilton holding hands behind him, used this rare moment as an opportunity — an opportunity to stress the need for Pence and President-elect Donald Trump to work "on behalf" of all Americans. Even, and especially, the "diverse," "alarmed," and "anxious" Americans, like the self-described ones on the Hamilton stage.

“We, sir — we — are the diverse America who are alarmed and anxious that your new administration will not protect us, our planet, our children, our parents, or defend us and uphold our inalienable rights," Dixon said. “We truly hope that this show has inspired you to uphold our American values and to work on behalf all of us.”

He wrapped up by noting, "We truly thank you for sharing this show — this wonderful American story told by a diverse group of men, women, of different colors, creeds, and orientation."

The politics of this particular Broadway production (namely its diverse cast and celebration of immigrants) oppose the severe comments Trump and Pence have shared during — and even before — their campaign. As governor of Indiana, Pence pushed for certain anti-LGBT policies, including a policy that sought to defund HIV/AIDS programs. The current lead of Hamilton — Javier Muñoz — is both openly gay and openly HIV positive.

After Dixon's powerful message, the crowd cheered. Pence hasn't responded to the remarks yet, but President-elect Trump shared his feelings about them on Twitter.

Hamilton has been revered for its of inclusivity, diversity, and positive portrayal of immigrants. So when King George III, played by Rory O’Malley, reportedly sang the lines "What comes next? When your people say they hate you?" directly at Pence, it should come as no surprise that he had to stop for a standing ovation.

Creator of the show, Lin-Manuel Miranda, said in June, "Hamilton is a story very deliberately told to reflect what America looks like right now." After this message on Friday night, those words ring louder than ever. Let's just hope both Trump and Pence were listening.