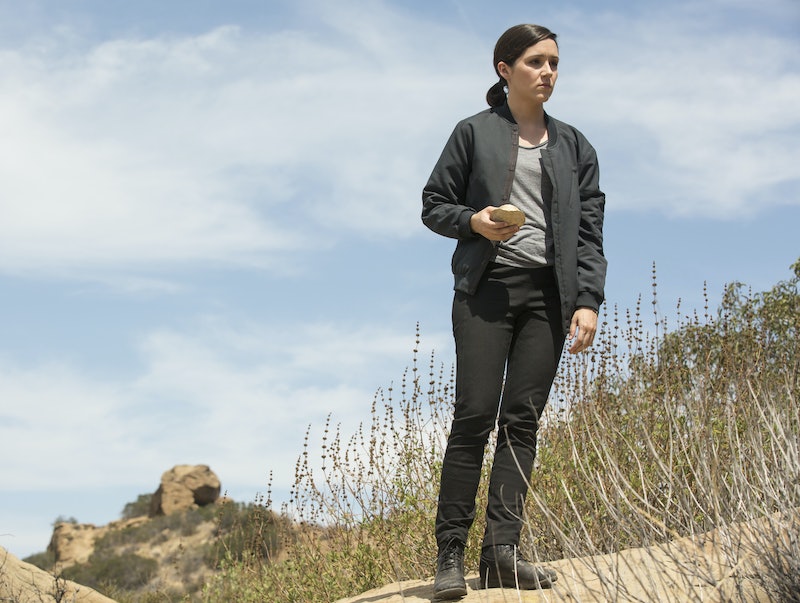 There are a lot of reasons to love HBO's Westworld, from it's terrific cast of actors to its stunning production values and its puzzle-box storytelling… but a cracking sense of humor likely isn't one of them. The sci-fi Western is admittedly a bit more self-serious than even its network companion Game Of Thrones, with plucky Westworld programmer Elsie Hughes providing some of the show's only one-liners and scenes of levity — which is probably a big reason why the character quickly became a fan-favorite. So it was worrisome when she found herself in a bit of hot water a few weeks back, and even more so that we haven't seen hide nor hair of her since. Where is Elsie on Westworld these days, and when might we see her again?

During the Nov. 6 episode, "The Adversary," Elsie set out into the park to solve the mystery of who had been committing industrial espionage with the help of a rogue host. She discovered a transmitter in an abandoned theater in an old section of Westworld, and learned that not only was Theresa Cullen the one smuggling out Ford's top-secret code, but that someone else — apparently Ford's dead partner Arnold — was also using the transmitter to control hosts for his own nefarious purposes. But before she could learn who exactly was posing as the dead architect and why, she was seemingly attacked from behind by an unknown figure.

Last week, the entire seventh episode, "Trompe L'Oeil," went by without word from Elsie; the only update we got on the missing programmer was when Bernard inquired about her whereabouts, and was told that she had suddenly gone "on leave." There was no sign of her in the promo of this week's episode, "Trace Decay," nor was there any clue about her future in the "Weeks Ahead" teaser that aired a few weeks ago after the fifth episode. Hopefully she turns up soon — and not just as a corpse — so that we can start getting some answers about what's going on with the park's glitching hosts and who's behind it all.

In terms of who kidnapped Elsie, the list of suspects is about as long as the list of employees working at Westworld. It could have been Ford, who knows the park like the back of his hand; he would certainly know the location of an old, out-of-use theater. It could have been Bernard, acting on Ford's orders; he's the only one who we know definitely knew her location, and now we also know he's actually a host who's supremely loyal to his creator. It could have been Stubbs, acting on order Cullen's orders; the Quality Assurance director might have dispatched the Head of Security to protect her top-secret mission on behalf of Delos. There's also the possibility that it could simply have been an old host, programmed by "Arnold" to wait in the dark theater and stop anyone who intruded.

But there's also the possibility that whoever "attacked" Elsie wasn't actually doing it maliciously. It was certainly shot to seem that way, with the unknown person (or host) sneaking up behind her in the dark and grabbing her without warning. But that could simply have been a misleading way of framing the situation, designed to make us worry for Elsie's wellbeing before later revealing that it was actually a friendly presence who simply surprised her. In that case, there seem to be two options: Stubbs and Bernard — but acting independently rather than on Theresa's or Ford's orders, respectively.

In the episode "The Stray," Elsie and Stubbs were shown to have a friendly (if charmingly antagonistic) repartée as they ventured out together in search of the rogue woodcutter. The security chief might have seen the programmer heading out on her own into the park and, worried for her safety, followed her to the theater. (I like this possibility just because the idea of Elsie and Stubbs teaming up to unravel the conspiracy is an appealing one.)

And although Ford seemed pretty confident that Bernard was always under his control, there's already been a hint that that's not quite true: the programmer's secret, late-night, off-the-record chats with Dolores. Unless he's conducting those conversations on Ford's orders (in which case, why doesn't Ford just do them himself, since we've also seen him interviewing Dolores as well?), it suggests that there's perhaps a bit more independence to Bernard than Ford suspects. We know that Bernard likes his missing colleague, and it's possible that, knowing Elsie was about to stumble onto something important, he went to intercept her and keep her hidden — and safe — before someone else could do her harm.

It makes sense that Elsie's been kept temporarily offscreen, since her quest was likely to lead to some answers that the show wasn't quite ready to reveal until closer to the finale. But now that Westworld is heading into the final three episodes of its freshman season, hopefully she comes back with a vengeance, ready to blow apart the Delos conspiracy with some well-timed revelations and her trademark cynical wit.