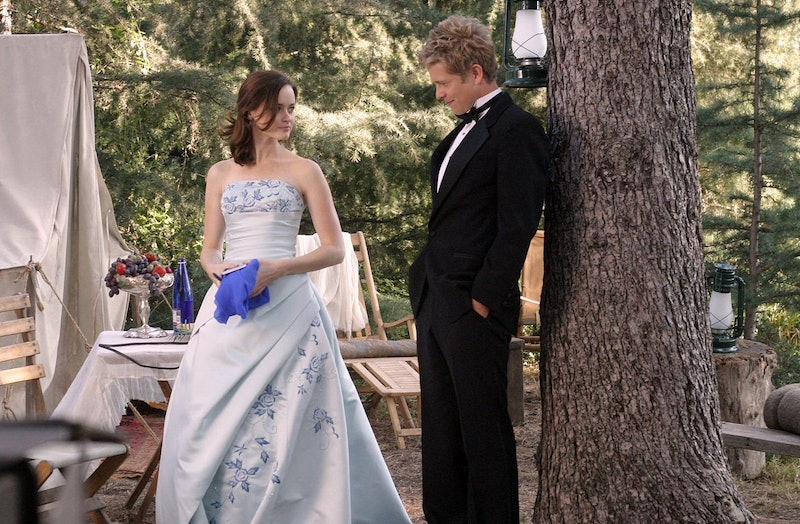 As Emily Gilmore struggles with the loss of her husband Richard, and Lorelai questions whether she's "happy" in her relationship with Luke, Rory ... dates? Is dating? Neither? We're not totally sure yet. We really only know that she's an unemployed adult living at home (a part of what the second Gilmore Girls trailer refers to as the "30-something gang"). The GG revival trailers haven't pointed us in any one direction when it comes to who Rory will end up with, but by the sound of Matt Czuchry's recent comments about Rory and Logan, at least Rory still has some romantic fans. At Friday night’s Hollywood premiere of Gilmore Girls: A Year in the Life, Czuchry, the actor who plays Logan, proclaimed his character's enduring love for Rory.

"Do you think Logan still loves Rory?" TVLine's Michael Ausiello asked. Czuchry replied confidently, "100 percent" before adding, “Logan loves Rory and will always love Rory, regardless of whatever ending there may be [in the revival]. I think Logan feels like Rory doesn’t need anyone or anything and that [makes] Logan want to give her everything.” Be still my Logan Huntzberger, you-jump-I-jump-Jack, hey Ace heart. Be still as you witness Logan, with his iPad, looking lovingly at someone (Rory, maybe?) in the latest trailer for the revival, below.

As far as fictional boyfriends go, Logan — with or without his iPad — was a catch. He loved Rory thoroughly. Though she might not have been her best self during their relationship (see: the yacht-stealing incident, the dropping out of Yale, etc.), she was also, from a narrative standpoint, the most interesting kind of Rory. When Logan rolled up in his turtleneck sweater, Rory was in need of a shake-up. The kind that Dean was not going providing her during the pivotal, nascent stages of the #Rogan relationship. Logan encouraged her to take risks, and to jump off tall, poorly built structures with umbrellas. He introduced her to new worlds (gorilla masks, not using the letter "e" in conversations). He knew her dress size just by looking at her. (That last one's actually a touch creepy. Please retract.)

Logan's not perfect and his fans know it, but he's a lot of other good things. He's charismatic. And smart. And charming as all hell, and Logan loves Rory. "Probably more so than Rory love[s] Logan," Czuchry told TVLine. This type of slightly one-sided love might not be what Rory needs now, years later, but at the time, it was ideal. Logan had the edge of Jess, with the dependability of Dean. He was a necessary piece in her puzzle of growing up and figuring things out. That cannot be taken away.

Though this wasn't mean to be a dissection of why Logan and Rory are perfect together and will end up happily in love forever, let's call it like it is: Anyone who's Team Rory deserves a special place in the hearts of Gilmore Girls fans.

*Cough* Except for Dean. *Cough*