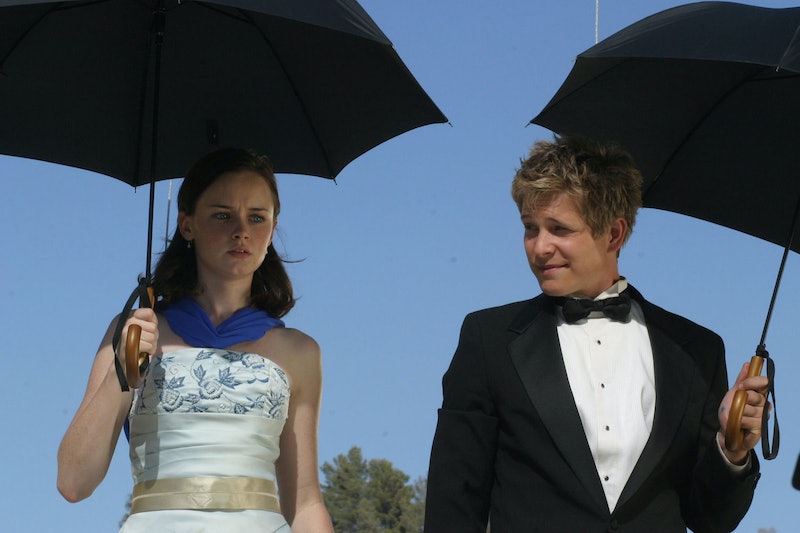 Say what you will about Logan Huntzberger. If you're Doyle, for instance, you'd say, "He's a real piece of work." But, if you're a dreamer and a proud Logan advocate, you'd say he's not so bad. In fact, you might even say that despite his glaring flaws, he's charming and handsome and exactly the kind of guy Rory should have ended up with. You might even point to one specific episode to make your point: Specifically, the episode "You Jump, I Jump, Jack." In it, Rory decides to take a leap of faith with Logan — both literally and metaphorically — and in a lot of ways, that leap changes her life for the better. In fact, you could say that minus the whole boat-stealing ordeal and the dropping out of Yale thing, Logan changed Rory's life for the better. "You Jump, I Jump, Jack" epitomizes how.

In the episode, Logan's ready to share a huge part of himself with Rory — the Life and Death Brigade. And Rory, even though she might not know it, is ready for some change. Actually, I take that back: She's in dire need of some change. Technically, at this point, Rory still happens to be in a "relationship" with Dean — I put that in quotes because she doesn't really appear to be in it, she's just going through the motions. While listening to a boring phone message from her boyfriend, Rory finds a note tape to her window. Guess who it's from? The Life and Death Brigade. From there on out, the sheltered Rory finally allows herself to take some risks, and whether you want to believe it or not, this risk taking is brought on entirely by Logan Huntzberger. Arrogant, inconsiderate, mindless, frat-boy, lowlife, butt-faced miscreant Logan Huntzberger.

In a way, you could say the blindfold that Logan puts on her to take her to the Life and Death Brigade's meeting is a metaphor. Up until this episode, Rory's pretty blinded by Logan's outward appearance and doesn't consider what could be underneath the privileged facade. When Rory finally takes her blindfold off and walks through the mystical Life and Death Brigade campsite, Logan asks Rory, "is this what you expected?" She responds, "No. Not at all what I expected." Is the talking about the campsite or Logan? You decide.

All this comes to a climax during the big stunt. When Logan's trying to convince Rory to jump, he tells her something that pretty much no one else in her life would have the audacity to say: that she's scared, and he's right. He says, "Come on. You look like you need a little adventure." Though it offends her, it seems like there's a part of her that respects the candor. He continues, "It'll be fun. It'll be a thrill. Something stupid. Something bad for you, just something different." Logan persuading Rory to jump from a seven-story scaffolding with just a harness and a fashionable black umbrella says something crucial about their impending relationship. Rory trusts Logan. This, of course, becomes clear in the final culminating moment, when Logan asks "You trust me?" and Rory responds with "You jump, I jump, Jack." In other words, she does trust him.

While I hate to make the case for Rory needing anyone — especially a boyfriend — there's something crucial about Logan's presence in Rory's life. At the end of this episode, while on a phone call with Lorelai, Rory asks her mom, "Do you think I'm too scared? Too timid? Do I take enough chances?" Lorelai insists that she's not, but she's her mom, and therefore biased. The audience on the other hand, should be nodding along to the questions, because they are fair. Rory was a little scared, and she did need to take more chances. Would she have eventually taken them without Logan? I'd like to think yes, but I'd also like to think that she couldn't have waited much longer.

Sometimes even the Rorys of the world need a little push, and though I'm sure Jess and Dean fans would hate to admit it, sometimes the Rorys of the world need the Logans. Otherwise, the only thing they risk is gliding through life completely unscathed. And that's a life, as I'm sure Logan and the Life and Death Brigade would agree, that's not really worth living. In Omnia Paratus.

More like this
“The Door Is Always Open” For Another 'Breaking Bad' Spin-Off, Says AMC Boss
By El Hunt
S Club 7’s Jon Lee Continues To Reach For The Stars
By Rachel Mantock
The 'Hocus Pocus' Sequel Finally Has A Release Date & It Makes Total Sense
By Shannon Barbour and Radhika Menon
These 2 Tragic ‘Stranger Things’ Finale Moments Were Improvised By The Actors
By Grace Wehniainen
Get Even More From Bustle — Sign Up For The Newsletter