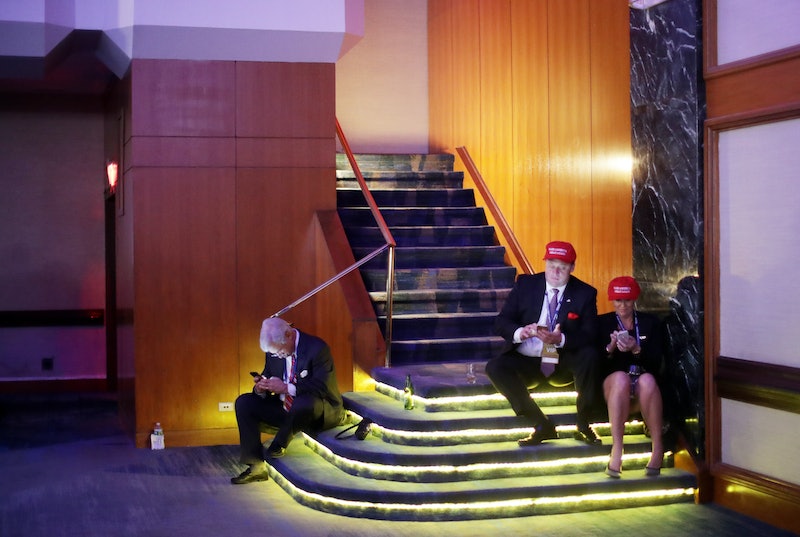 In a statement read at the curtain call of their Nov. 18 performance at Richard Rodgers Theatre in New York, the cast of Hamilton urged Vice President-elect Mike Pence to work on behalf of all Americans. But their words didn't sit well with Donald Trump, who accused them of having "harassed" Pence and demanded an apology on Twitter. Unfortunately, Pence's adventure at Hamilton and Trump's subsequent Twitter rant have largely dominated the day's news cycle, proving Trump knows just how to distract everyone from the stories that matter.

Although Trump lashing out and broadcasting his feelings on Twitter is nothing new, his reaction to what the cast of Hamilton had to say to Pence has come to overshadow a series of more noteworthy stories. If Trump was hoping to draw people's attention away from the many news stories surrounding his presidency. You know, things like that his daughter Ivanka Trump sat in on his meeting with the Japanese prime minister Thursday; or his appointment of Steve Bannon and Sen. Jeff Sessions to key positions within his administration; or from reports that roughly 100 foreign diplomats booked rooms at the Trump International Hotel in Washington, D.C., in hopes of currying favor; or that members of Congress were being flooded with calls from constituents concerned about Trump's financial conflicts of interest; or of reports he settled three fraud lawsuits against Trump University.

So, sure, Trump might act like he cares that Pence was booed by some audience members at Hamilton, but he really cares about distracting people from the things that matter most.

While there are a handful of news stories from this week more deserving of your attention, I can see why the Hamilton piece picked up steam so fast. In the 16 months since Hamilton first premiered on Broadway in July 2015, it has quickly become a pop culture phenomenon. People know Hamilton. Even if you haven't seen it, even if you haven't heard one single lyrical verse from it, you likely still know Hamilton, which has caused the story to resonate with so many people.

Now, I'm not saying there's nothing worth noting in the news of how Trump responded to the cast of Hamilton exercising their First Amendment right. Given that the president and the vice president serve the people, it's concerning that he took citizens voicing their concern as harassment. It's troublesome that with all Trump must have going on at the moment, he found time to rebuke a few Broadway actors over Twitter. And that's really my point. Clearly, Trump is looking to distract us with Hamilton.

As Hamilton's own Thomas Jefferson implores in the song "The Election of 1800": "Can we get back to politics? Please?"