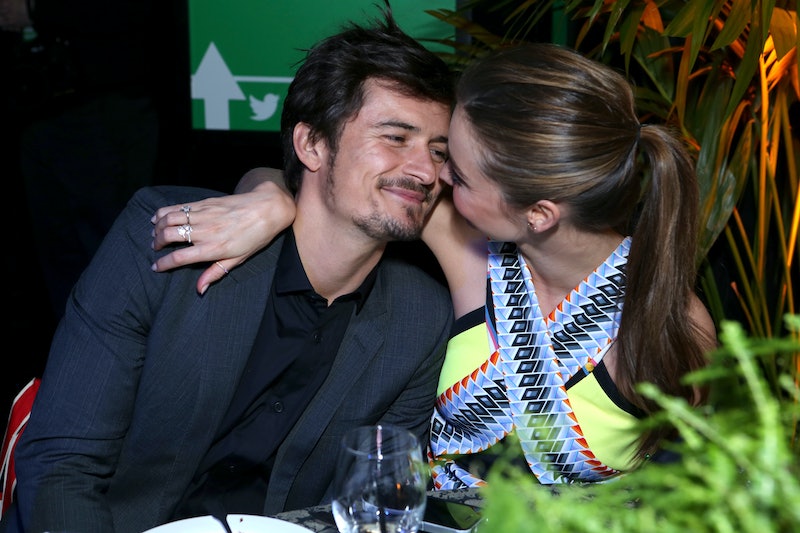 If there's one thing you can rely on in Hollywood, it's the inevitability of a celebrity split. The number of famous couples who stay together are far outnumbered by the number of celebrity pairs who go through partners like Kleenex, who are rumored to go through partners like Kleenex, or simply seem as if they and their significant other are a match made in heaven until, suddenly, they aren't. The latter was certainly the case when Orlando Bloom and Miranda Kerr broke up last October after three years of marriage and the birth of their son Flynn. Although the two have had nothing but good things to say about one another ever since, GQ reveals in an upcoming feature story that Kerr has already begun dating again in the five months since the split.

I’m dating. I’m loving it. Two happy parents are better than two unhappy parents. This is my time to explore and have some fun. I’m not looking to fall in love again quickly.

She also admits to appreciating "both men and women" and "the female form", although she needs a man in the bedroom for the "nice strong chest to lie on." Her fluid sexuality means the list of celebrities we might see her holding hands with next has gotten twice as long, making it twice as hard to tell if she's actively looking for love or not. All Kerr really has to do is flash a hint of her famed dimpled smile and she could probably get anyone she wanted.

Bloom, on the other hand, has not dated anyone since breaking up with Kerr and has admitted to feeling "rudderless" during that time. This news comes as no real surprise. As much as Kerr and Bloom were doing their best to make all of us feel guilty for every single time we ever set our exes' things on fire after a breakup, their post-divorce life did seem just a bit too drama-free.

Only a week after the split, Bloom was discussing Kerr as amicably as ever, stating, "we’re both adults, and we’re professionals, and we love and care about each other". He interrupted her interview at the Oscars After Party to kiss her on the cheek and tell her she looked beautiful. They've even been photographed happily spending time with each other and with their son as if the breakup never happened.

But it did. And, as with all breakups, there's always one person who moves on easier than the other. And Kerr has a point: Two happy parents are better than two unhappy parents, and now that Kerr is on her way to a possible future love, it's Bloom's turn to tip a toe back in the dating pool. Kerr's not the only one who can have anyone she wants with a single smile.