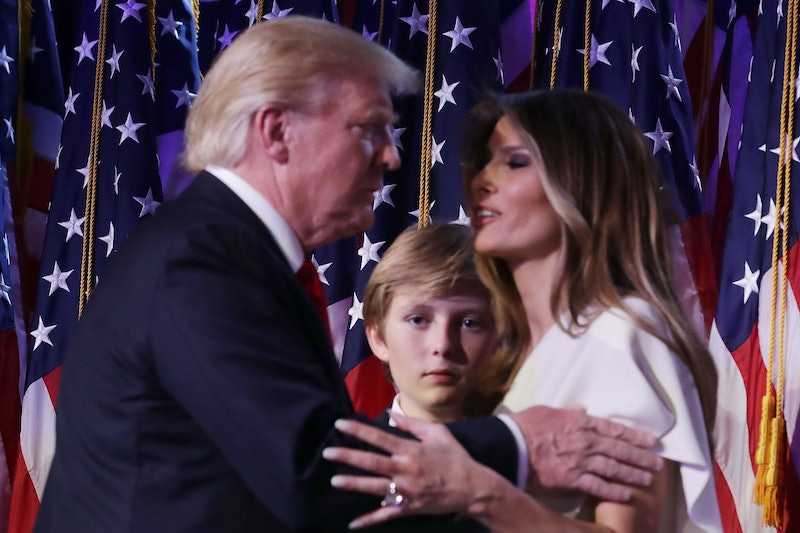 Pretty much everything about Donald Trump's presidential campaign was unconventional. The same could be said, so far, for his transition from candidate to president. Now, it seems that Trump's family will make a fittingly unconventional arrangement when he takes office in January: The New York Post reported Sunday that Melania and Barron Trump won't move into the White House with the new president — at least not right away.

According to the Post, a source close to President-elect Trump's transition team said that Melania, the future first lady, and Barron, Trump's 10-year-old son, will stay in New York for the time being so that Barron can remain at his private school on Manhattan's Upper West Side. A second source also claimed that no plans were in place for Melania and Barron to eventually move to Washington, D.C., after the school year ends in June. That said, the first lady reportedly still plans to fulfill her duties to the White House and the country.

Melania is very supportive of her husband and is fully on board of doing everything that’s needed as first lady.

In addition to being "on board" as first lady, it would seem that Mrs. Trump is fully on board as a mom. The Post story describes Melania as a hands-on mom, and an interview she did with Parenting.com tells the same story. "I am a full-time mom; that is my first job," she told the outlet.

According to the interview, Melania cooks meals for Barron, drops him off at school, and plans her meetings and professional obligations around his schedule, as possible. Basically, she's a regular working mom — with a few advantages, no doubt. Her professional obligations may change when her husband is inaugurated in January, but based on the decision to stay in New York, it would seem that her role as a mother will not.

Working motherhood is a theme that seems to connect the Trump women, namely Melania and the Donald's daughter Ivanka Trump. A mom of three young children herself, Ivanka also balances her busy career with motherhood, and she encourages other women to do the same. Her "Women Who Work" initiative highlights the challenges and successes of working mothers like her.

Ultimately, Melania's decision to remain in New York with her son seems out of the ordinary for an incoming first lady. But it doesn't seem out of character for Melania herself, who has a track record of putting Barron first. It's still too early to tell, but her decision as a mother could work out for the mothers of America who will live under her husband's administration.