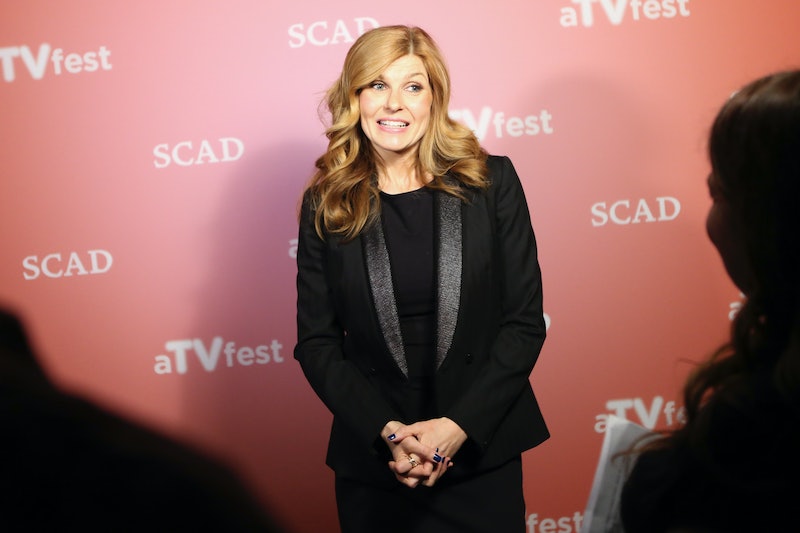 Here's some news to make your Monday decidedly more enjoyable: Connie Britton has joined Twitter. After years of stating in interviews that she was staying away from the social networking site, the actress has apparently changed her mind, and we couldn't be happier she did. Britton's verified Twitter means that from now on, we'll be able to hear Tami Taylor's bits of wisdom straight from her mouth (or at least her computer). What could be better than that? Oh, just her first tweet — a simple, perfect "Hey, y'all!"

In the short time since her account was discovered, Britton's done a lot — or rather, the Internet has for her. At the moment, the actress' Twitter has over 16,000 followers, and the number keeps growing with every refresh (not that we're refreshing constantly... that'd be obsessive). A photo, background, and bio have all been added, and twenty-four people have been followed. It's a lot of information to process, especially if you're still stuck on the fact that CONNIE BRITTON has a Twitter. Here's what we've learned so far:

1. She Has Her Priorities Straight

Britton clearly knows what her fans want to hear, because her first tweet was none other than the two most famous words she's ever said on television. "Hey, y'all" induces some serious Friday Night Lights nostalgia, and it also reminds people that Connie Britton is not all that different from Tami Taylor. The actress can tweet all she wants to about Nashville and Obama (more on that in a bit) later, but for her first post on Twitter, she knew that all people would want to hear is a simple, reassuring "y'all."

Or at least she loves promoting it. It's no surprise that Britton would mention Nashville in her bio, but the adding of a promo background and immediate following of all her co-stars is a bit much. Someone's clearly hoping to keep that show on the air for another season.

Nashville's not the only show Britton loves, apparently. Nearly every one of the 24 people the actress follows is either from her TV series or a political figure, but one of them stands out from the rest: Kerry Washington. Maybe Britton is a huge fan of Scandal, or maybe she's just close friends in real life with Washington, seeing as Twitter also reveals that the two women share the same digital strategist. Either way, it's amazing: either Britton is a Gladiator like the rest of us, or she hangs out with Olivia Pope herself on a regular basis. Basically, no matter what the reason is, she's the coolest.

Britton's made no secret of her left-leaning political views, but if it wasn't clear that Britton is a Democrat, her Twitter account should do the trick. Britton follows The White House, Barack Obama, and Michelle Obama, and before she even came on the site, @TeamConnieBritt was sending pro-Obamacare posts that the government swiftly re-tweeted.

Strangely, Britton hasn't yet followed the most important account of all, @ConBritsHair. During those long, hard years when Britton wasn't on Twitter, this often-hilarious account was the closest we got to the actress' social media presence. It seems to be having mixed feelings about Britton's joining of Twitter, first posting that this was the "best day ever, y'all" but then re-tweeting a fan's post that "you'll always be the original." If Britton herself becomes a follower, though, then you can bet the only feeling @ConBritsHair will be have is total elation.