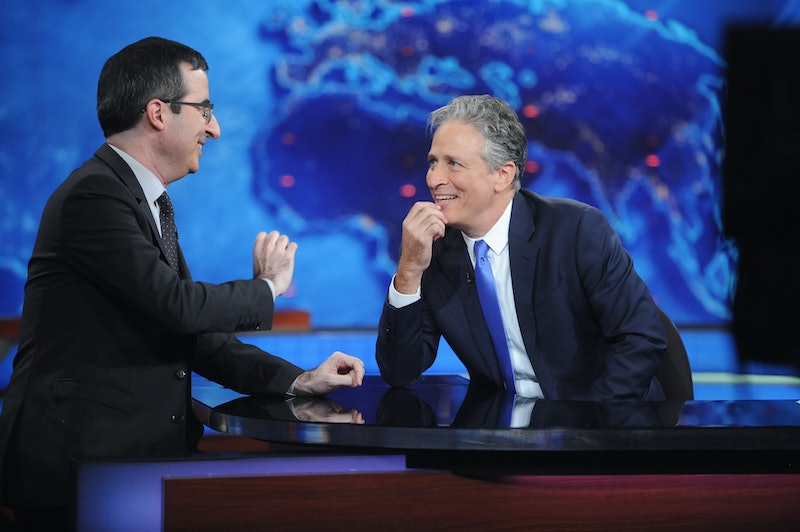 If there's one good thing that came out of Donald Trump's wild and unruly presidential campaign, it was surely John Oliver's epic rants on Last Week Tonight. As with all good things, though, Oliver's third season as the host of HBO's late-night news hour came to an end last Sunday. The season ended fittingly, with the election of President-elect Trump taking right, left, and center stage, but those who yearn for more of the show's wit may wonder — nay, hope — if John Oliver and Jon Stewart will work together during the hiatus.

Although he left the late-night comedy circuit in 2015, Stewart hasn't remained totally silent in the wake of this month's presidential election. On Wednesday, about a week after Trump bested Hillary Clinton for the office of the presidency, Stewart spoke out about the election to CBS's Charlie Rose. He called Trump a "repudiation of Republicans."

I don’t believe we are a fundamentally different country today than we were two weeks ago. ... The same country that elected Donald Trump elected Barack Obama. I feel badly for the people for whom this election will mean more uncertainty and insecurity. But I also feel like this fight has never been easy.

Stewart's comments weren't in the same comedic tone that many of his fans are used to. Rather, he remained serious and balanced. He seemed to criticize some parts of the Republican establishment, while also blaming Democrats for misjudging Trump's supporter base.

The interview came just days after Oliver wrapped the third season on Last Week Tonight. The season finale left the same larger-than-life impression that much of the season did: that Oliver is vehemently and hilariously opposed to having Trump as president. He offered his viewers ways to counteract a Trump presidency (peacefully), including the suggestion to subscribe to a newspaper. (Note: The video below contains some NSFW language.)

Now, Oliver has some time off-air. He'd probably like to relax with family and enjoy the holidays, but wouldn't it be nice if he and his former Daily Show boss teamed up for a reunion? That could surely lift the spirits of America after a couple weeks of unrest.

An Oliver-Stewart reunion could happen, but there's no sure sign that it's in the works. For his part, Stewart is promoting his new book about The Daily Show, and with Oliver's third season already wrapped, it doesn't look like a trip to the Last Week Tonight stage is part of the book tour. Still, crazier things have happened ... but funnier things surely haven't.