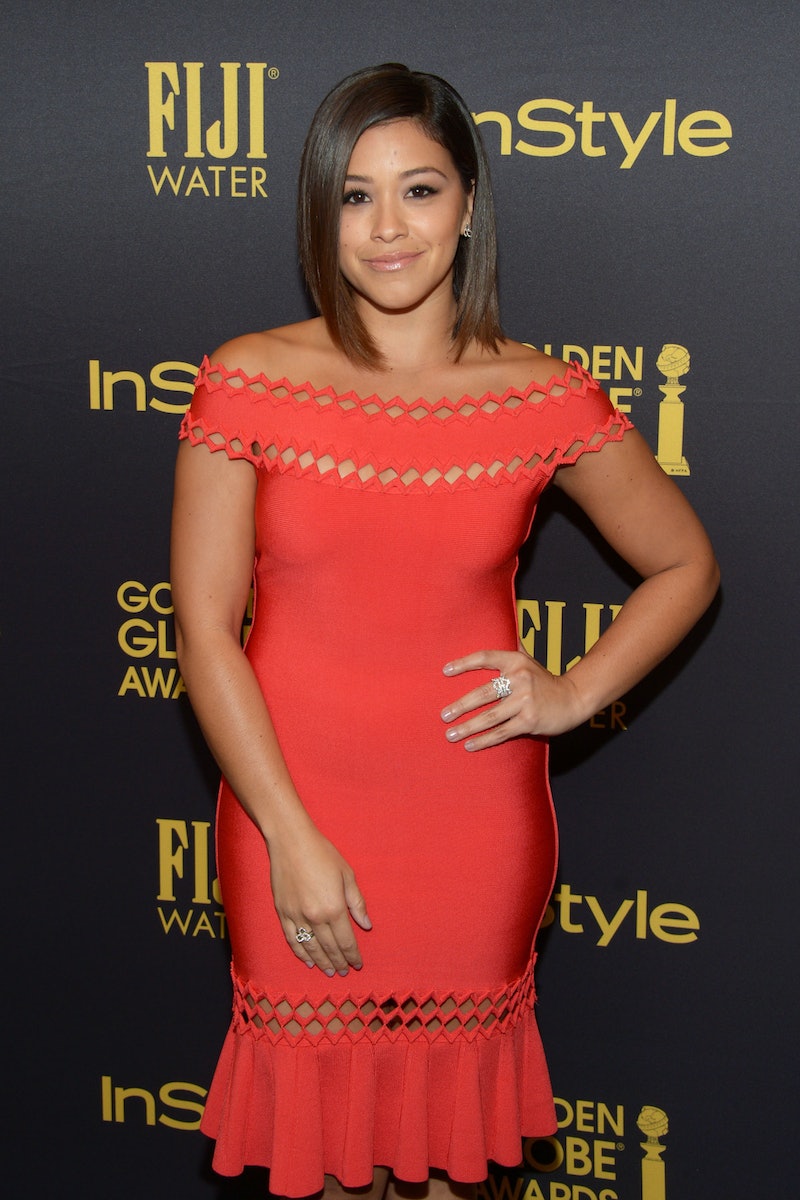 Love seems to be in the air for Jane the Virgin star Gina Rodriguez. The actor might have a new boyfriend, and if you're not sure who he is, you won't be in the dark for long. Joe LoCicero, Gina Rodriguez's possible new love, served as the star's date to Marie Claire’s Young Women’s Honors event on Saturday, Nov. 19, E! reports. Sources told the outlet that the two were spotted being all sorts of cuddly, and even allegedly shared a few kisses. If it's true, I'm thrilled for Rodriguez, because she is a delight and deserves happiness. But just who is the guy she's snuggling up with? It turns out that he and Rodriguez actually have a lot in common.

For one thing, they're both Jane the Virgin fans. About a month ago, the actor tweeted to a fan about a Jane the Virgin watch party, saying, "Y'all watching jane? Can my boyfriend and I join?" It's not confirmed that Rodriguez was referring to LoCicero, of course, but it's definitely possible. She was last rumored to be dating actor Ben Schwartz in early 2016, and before that, she and Henry Esteve of Revenge fame were apparently an item for a little longer than a year. But now, it seems that LoCicero might be her new love, if the rumors are true.

LoCicero is an actor, just like Rodriguez, and he even appeared on Jane the Virgin for one episode, "Chapter Thirty-Nine," as a Don Quixote impersonator/stripper. In the hilarious episode, which follows both Jane and her fiancé's bachelor/bachelorette parties, the women in Jane's life do their best to give the almost-bride the party of her dreams. It all goes wrong, though, when Jane is teaching Don Quixote to a class and is shocked to see the man himself (or at least the stripper impersonator version of himself) strolling in, ripping off his armor, and starting to grind on her. Jane's boss isn't amused, but the comedy of the moment is so real.

And Rodriguez's co-stars seem to be on-board with LoCicero, as some members of the cast of Jane the Virgin were also in attendance at the Young Women's Honors Gala, like Yael Grobglas. LoCicero is no stranger to Hollywood, as, in addition to his work on Jane, he has acted in some indie films like Welcome to Willits and Spaghettiman. He also has done some voice acting work for the video game Battlefield 1, and has done a few radio performances with the Long Beach Shakespeare Company. If they are indeed dating, it seems that Rodriguez has found herself a partner who's as passionate for the craft as she is, and that's certainly something to celebrate.

More like this
A New Netflix Doc Will Explore The Unsolved Murder Of Jill Dando
By Sam Ramsden
'The Crown' Season 6 Has Suspended Filming "Out Of Respect" For The Queen's Death
By Bustle Staff
A New 'And Just Like That' Table Read Pic Confirms A Key Character's Return
By Jack Irvin and Grace Wehniainen
Keke Palmer Shares The Sex Of Her & Darius Jackson's Baby
By Jake Viswanath
Get Even More From Bustle — Sign Up For The Newsletter
From hair trends to relationship advice, our daily newsletter has everything you need to sound like a person who’s on TikTok, even if you aren’t.