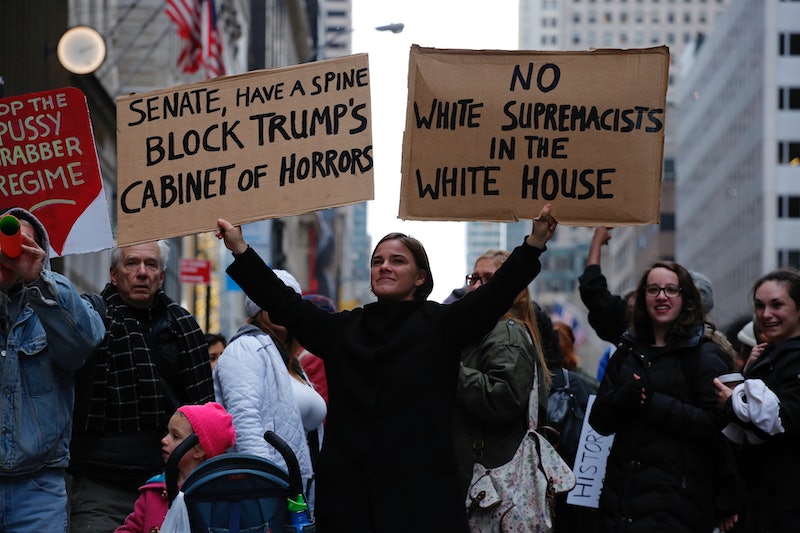 Since Donald Trump's shocking win in the election on Nov. 8, tens of thousands of Americans have taken to the streets to protest against the president-elect, with plenty of good reasons. Trump's racist, misogynistic, and xenophobic comments and more recently his incredibly controversial appointments to his Cabinet have a lot of people angry and vocal about their concerns. However, it seems like it's probably time to face the facts. While there's an ever-so-slight chance that Trump might still not be confirmed by the Electoral College, Trump is more than likely going to be the next president, so now is the time to figure out a new strategy. Here are seven things to protest for in addition to Trump's administration, because four years of protesting against just him isn't enough.

The anti-Trump protests have been a really important symbol of hope for the millions of Americans who were targeted by Trump's rhetoric throughout his campaign, but now is the time to extend that into protesting for policies that will help those marginalized people. Each of the following reasons to protest would benefit the most vulnerable of American society, and enacting those changes will bring the country closer to true equality. Even if Trump refuses to create any of the following policies, the next president will know where the people stand and where the country needs to go.

Trump's appointment of Myron Ebell, a vehement climate change denier, to head the Environmental Protection Agency is one of his most criminal actions to date. The Earth has to be protected at all costs, and the country can't afford four years of lax environmental regulation. The United States needs a climate change action plan like Canada's, which promotes economic growth and works to save the environment.

The proposed oil pipeline on the Standing Rock Reservation is a direct violation of Native American treaty rights, and a disgrace to this country's indigenous population. This has been going on for months, and relatively few have stood up for Standing Rock the way they have protested against Trump.

The nuclear program is set to cost the United States an estimated $500 billion over the next 20 years. There is a nearly innumerable list of better causes that money could go towards, so maybe it's time to ditch the nukes and save our federal funds for some more worthy reasons. Plus, they're super dangerous, so there's that, too.

In the richest country in the world, less than 1 percent of federal funding, a mere $30 billion, goes to foreign aid. Compared to $663 billion for the defense budget, that's selfish and unjust as a country. Demanding that the United States invest in peace instead of war should be just as important as calling out Trump's nasty rhetoric.

Trump supporters say he's a huge feminist, so now he can prove it by mandating equal pay. He's off to a good-ish start with his proposed paid family leave policy (though it has some sexist flaws of its own), but he can continue to make up for his bad reputation with women by eliminating the wage gap.

Trump's "law and order" stance is thinly veiled racial discrimination that threatens to increase the high proportions of black and brown people currently in jail. Instead, demand that mandatory minimum sentencing be either reduced or eliminated, that cities end broken windows policing, and that more federal and state funding goes to schools instead of prisons.

This one's a long shot since Congress is completely controlled by Republicans for the next two years, but it's important. About 33,000 Americans die because of guns every year, and the existing regulations pretty much do nothing to prevent guns from getting into the hands of criminals.

These policies will create a better country for everyone, not just a few. If Trump wants to be a president with a lasting legacy, these are just a few of the progressive changes that need to be made, and you can help make that happen by taking to the street and letting him know what you want.