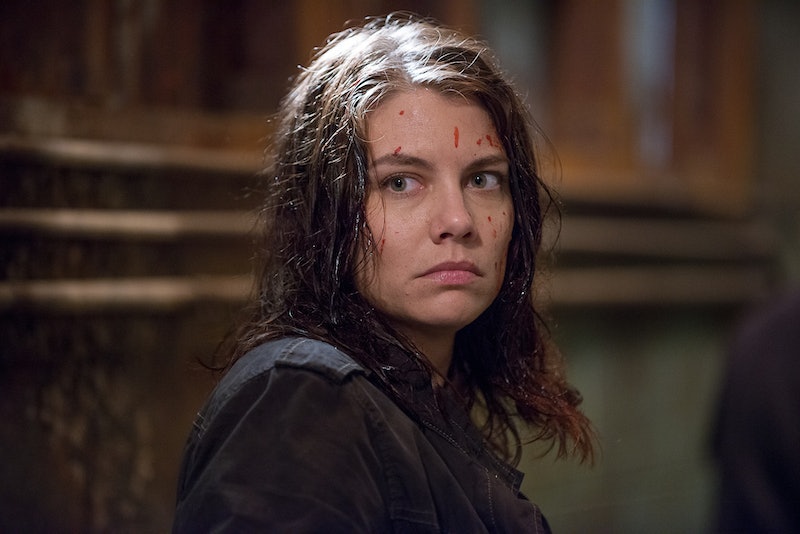 Even on The Walking Dead, life goes on. Negan and the Saviors may be terrorizing three communities, but the residents of those communities have to keep living and trying to settle down, which was the focus of the Nov. 20 episode, "Go Getters." While Alexandria has faked her death, Maggie officially joined the Hilltop Colony on The Walking Dead, along with Sasha. At the end of the episode, Enid even joined their little family, which will soon grow, as we learned that Maggie's unborn baby is safe. It's always sad to see the group separate, but having these three at Hilltop while Carol and Morgan are at the Kingdom is going to make for an even more epic team-up when they eventually join Alexandria and go to war.

Now the question is, will Maggie lead Hilltop? Jesus seems to see that coming, and after she took charge from the shadows during an odd Savior attack, I wouldn't be surprised. Plus, this place obviously needs new leadership. It took more than a little political manipulation just to get Maggie and Sasha a place at Hilltop. Gregory, the leader at the historical home-based community, wasn't having it. He tried to deny them and betray them to the Saviors. He even tried to tell Maggie that Negan and the Saviors weren't that bad. Ha! However, thanks to Maggie's epic confrontation with Gregory and a little help from Jesus, Maggie and Sasha are here to stay.

Her "Maggie Rhee" moment was easily the highlight of the episode. She shut down Gregory's misogyny and overall rudeness by standing up to him, and in the process, revealed that she has taken Glenn's name. "This is our home now," she demanded, "so you'll learn to start to call me by my name. Not Marcia, not 'dear,' not 'honey.' Maggie. Maggie Rhee." It could not have been a more fitting tribute.

Maggie deserves a break and she just might get it, as well as some opportunities to keep being one of the apocalypse's biggest badasses and become a true leader at Hilltop Community.