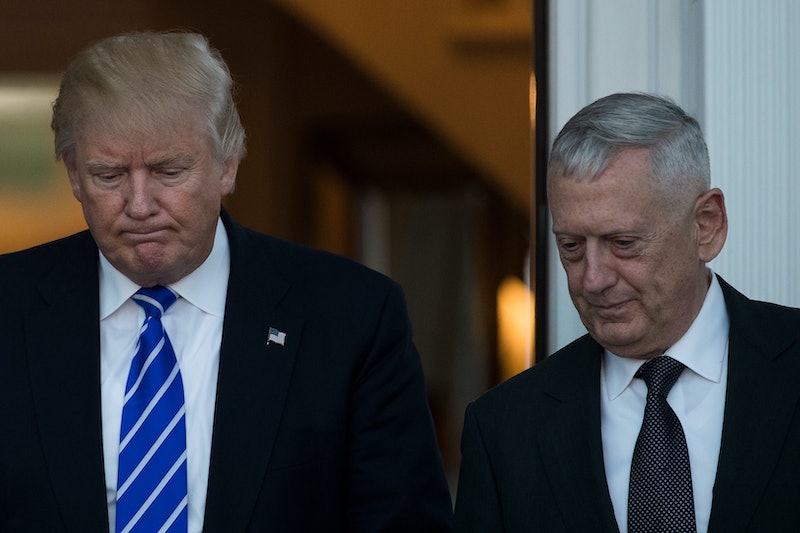 The president-elect wrote in a tweet Sunday that he's considering tapping retired Marine Gen. James Mattis to serve in the Donald Trump administration as Secretary of Defense. Despite never serving in the military himself, Trump called Mattis "a true General's General," and the two met for more than an hour on Saturday in New Jersey. Take a closer look at Mattis, and it's not at all surprising that Trump is eyeing him for Defense Secretary.

"Mad Dog" Mattis, as he's sometimes called, served 44 years in the Marine Corps and has led units in Afghanistan and both Iraq wars. He commanded a division of Marines during the Battle of Fallujah in 2004, one of the most deadly of the Iraq war, and is generally lauded for his leadership abilities. He replaced Gen. David Petraeus in 2010 as commander of U.S. Central Command and co-authored COIN, the U.S. military's counterinsurgency manual.

In addition to his military expertise, Mattis is also noted for his many colorful quotes about killing people. "If you f*ck with me, I'll kill you all," he told a group of Iraqi military officers in 2003. That same year, he instructed his Marines to "be polite, be professional, but have a plan to kill everybody you meet."

At a 2005 panel discussion, Mattis told the audience:

You go into Afghanistan, you got guys who slap women around for five years because they didn't wear a veil. You know, guys like that ain't got no manhood left anyway. So it's a hell of a lot of fun to shoot them.

He expressed a similar sentiment while addressing his Marines in Iraq, noting that "there are some assholes in the world that just need to be shot."

Mattis is an outspoken opponent of killing civilians in wartime. "If in order to kill the enemy you have to kill an innocent, don't take the shot," he once instructed his Marines. "Don't create more enemies than you take out by some immoral act." That being said, he was also responsible for ordering an airstrike in 2004 that, while intended to hit a "suspected foreign fighter safe house" in Iraq, ended up killing 42 civilians at a wedding instead.

In Mattis, you have a respected general who led one of the bloodiest battles of the Iraq war and speaks gleefully of killing people. Trump, though not a military man himself, says things like "I love war," supports killing the civilian families of terrorists, and pledges to "bomb the sh*t out of ISIS." With statements like that, it's no wonder he's a fan of Mattis.