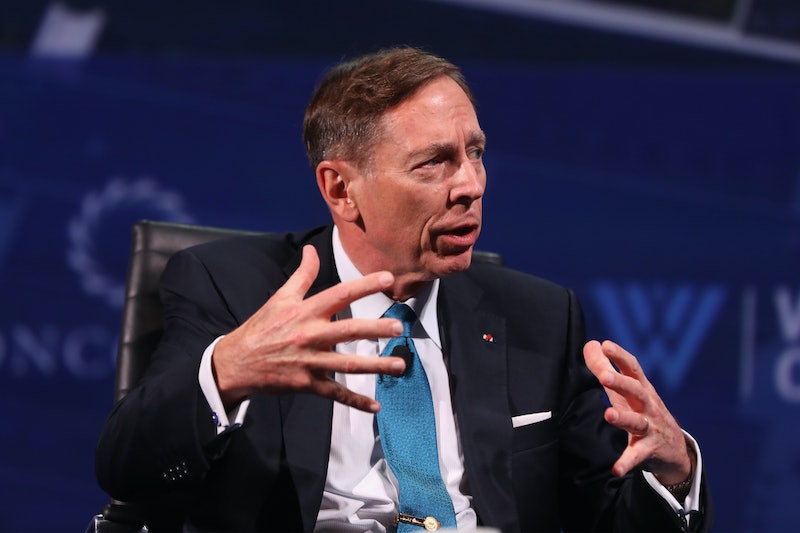 Donald Trump has already selected his National Security Advisor, Attorney General, and CIA director, but there are plenty of more spots to fill in his cabinet — and plenty of politicians who'd love to fill those spots. In the foreign policy department, Trump still has to select Secretaries of Defense and State, among other positions, and this has many people wondering if Trump might put David Petraeus in his cabinet.

It's possible: The Guardian reported Thursday that Petraeus is indeed in the running for Secretary of State in Trump's administration, and that he has privately refused to rule out serving under Trump.

Petraeus is most notable for having led the 2007 "surge" in the Iraq war under President Bush, and later served as commander of U.S. Central Command. In 2011, President Obama appointed him to head the CIA, where he served for a little over a year before resigning over a scandal (more on that later). Petraeus was succeeded* at U.S. Central command by Gen. James "Mad Dog" Mattis who, incidentally, is now in the running to serve as Trump's Defense Secretary.

In some ways, Petraeus would be an odd choice for Trump, and by "odd," I mean "flatly hypocritical." During the presidential campaign, Trump spent a lot of time accusing Hillary Clinton of being careless with classified information during her time as Secretary of State.

But while this accusation was largely speculative, Petraeus actually pled guilty to illegally sharing classified information with his biographer (author Paula Broadwell, with whom he admitted he was having an affair). He was given two years probation and fined $100,000, and it was this incident that led to his resignation as CIA director in 2012. In a plea deal, Petraeus also acknowledged lying to FBI investigators about giving classified information to Broadwell. Now, Trump is considering selecting him as Secretary of State.

But why is it okay when Petraeus indisputably does a bad thing, but not okay when Clinton potentially does a similar bad thing? Is it because Clinton is a woman, or that she didn't serve in the military? Perhaps Petraeus' actions were excusable to Trump because Petraeus wasn't running against him for president at the time. Or maybe Trump doesn't actually care about classified information, and was just sort of talking without thinking too much about it.

Of course, this is silly. Trying to find rhyme or reason, let alone any semblance of consistency, in Trump's views on government is a fool's errand. Let's just accept that he's considering Petraeus as Secretary of State and leave it at that.

*Gen. John Allen served as acting commander for a month and a half in between Petraeus and Mattis.