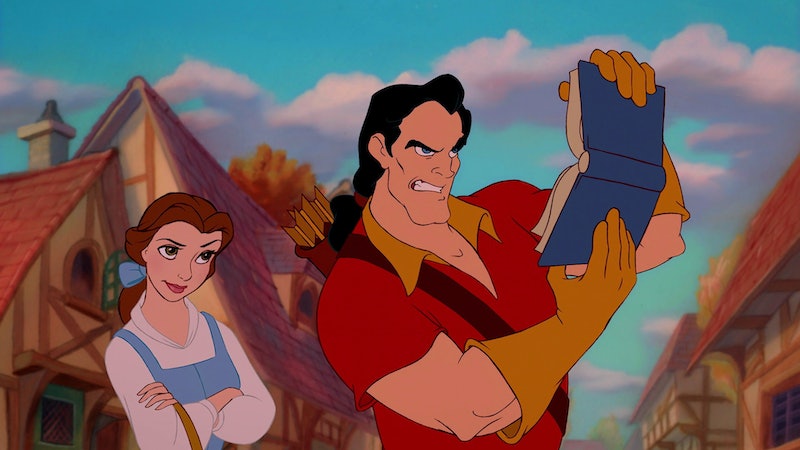 No Disney movie would be complete without the obligatory villain — and, as we celebrate the 25th anniversary of Beauty and the Beast , it seems like the perfect time to talk about why Gaston is truly the scariest Disney villain of all. Look, I know he's got no shortage of competition — there's Scar in The Lion King, Hades in Hercules, Jafar in Aladdin... you get the idea. On the surface, Gaston appears to be a caricature of the quintessential sexist, entitled bully — and, considering a man who fits this description (in my opinion) was recently elected president, it's more important than ever to revisit this character and talk about why exactly he's so terrifying.

At risk of stating the obvious, Gaston is an actual human being rather than, say, a lion, a mythological deity, or a sorcerer. Because he possesses no magical powers and still manages to have an entire town under his spell, Gaston is far more realistic than any other Disney villain that's appeared on our screens. And, as I re-watched Beauty and the Beast for the first time since grade school, it struck me that he's way too similar to so many men we encounter in real life.

OK, so I've thankfully dodged the experience of a guy showing up at my parents' house while they're out of town with a wedding party in tow. (Phew!) But what I, and every other woman I know, haven't escaped is men who won't take "no" for an answer. They're the popular, attractive guys who think we're simply playing hard to get when we decline a date. They're the bros in bars who have called us "frigid" and worse when we have the audacity to reject their advances. They're the men who feel threatened by an intelligent, well-read woman — and, although most guys have moved past the phase of blatantly stating that a woman's place is in the kitchen, studies have shown that men continue to see powerful, ambitious women as threats to their masculinity.

Gaston physically threatens everyone who displeases him — he throws Belle's beloved book into the mud (straight-up sacrilege) and later he literally backs her up against a wall in a way that makes me cringe because we've all been there. That's probably why one of the movie's most satisfying moments is when she shoves him into the mud after delivering this terrific one liner: "I'm very sorry, Gaston, but I just don't deserve you."

And, although the audience and Belle are repulsed by Gaston, the film makes a strong statement by emphasizing that men and women alike clamor for his approval — heck, all the men in town want to be him and the guy has three attractive blonde women fighting for his affection. Twenty-five years after Beauty and the Beast's release, social status and wealth are often enough to make people look past a man's most reprehensible, sexist qualities.

Sure, Gaston is a somewhat over-exaggerated representation of machismo culture — but it's not that much of an exaggeration. After all, a man who brags about groping women and has stated that he goes "through the roof" if he arrives home and dinner isn't ready is headed to the White House in January. Not only are there countless Gastons out there, but they aren't held accountable for their actions and there are plenty of people who are eager to validate their behavior as acceptable. And if that's not terrifying, I don't know what is.