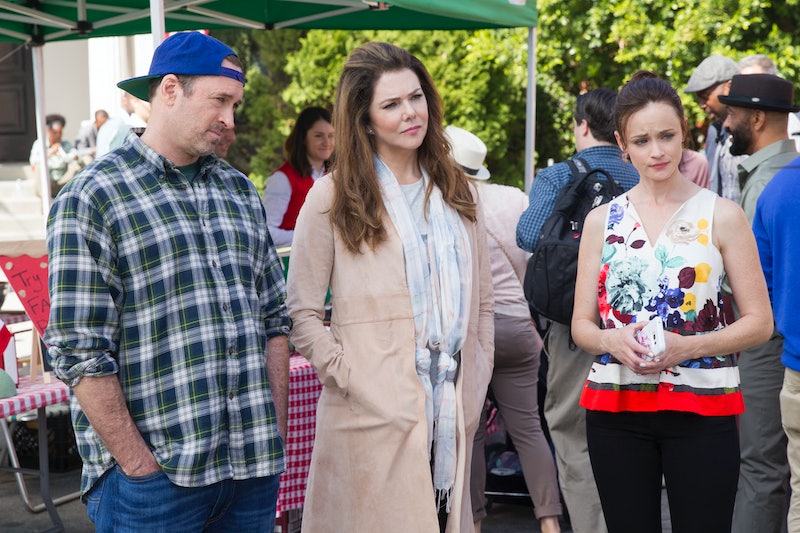 It's been nearly 10 years since we said "Bon Voyage" to the entire Gilmore family and the quirky, lovable cast of characters who inhabit Stars Hollow. Luckily, sometimes dreams come true — and, at long last, the Gilmore Girls revival hits Netflix on Nov. 25. If that's not something to be thankful for, I don't know what is. Based on the trailers and teasers, it looks like we can rest assured that some things will remain the same — quick and witty dialogue, Lorelai and Rory's ability to put away massive amounts of takeout food, and the quirky town spirit of Stars Hollow. But a lot can change over ten years, so how will the Gilmore Girls revival be different from the original series?

Of course, the biggest difference is the format. Instead of the full seasons of 45-minute episodes we watched in the 2000s, we'll have four 90-minute episodes, each of which is tied to a season. In keeping with the lyrics from the show's perfect theme song, it'll kick off with "Winter" and conclude with "Fall." The original series aired on The CW (which was originally The WB) and we know Netflix allows showrunners far more freedom than basic cable channels, but the trailers indicate that the overall spirit and tone of the show will be similar to the original. Lorelai loves an occasional dirty joke and she'll be able to get away with a few more on Netflix, but the series appeals to a new generation of younger viewers in addition to those of us who watched it during its initial run — so, although it'll be nice to be free from network constraints, I don't think we should expect any R-rated content in the revival.

Although the vast majority of the main cast (plus some new guest stars whose roles remain mysterious) has returned for the revival, let's address the most heartbreaking change — Edward Herrmann passed away in 2014, so the Gilmore women will be grieving the death of Richard, who was one of the show's most beloved characters. It's clear from the trailers that Emily is reeling — I never thought I'd see the day when she'd be clad in jeans and a t-shirt. As Kelly Bishop told E! News earlier this month:

"Emily is dealing with widowhood and it's a huge part of the whole thing for her. She has different adventures, some of them are funny, some of them are sad. She's just kind of plodding along trying to find herself, how she does it now, what it means."

It appears that Friday night dinners are still going strong — although Kirk's attendance is definitely a departure from the original series and I can't wait for an explanation regarding his presence. Although Lorelai and Emily consistently have their differences, I think we can count on all three Gilmore women to come together and support one another during the painful aftermath of Richard's death. And Bishop's observation that Emily is trying to find herself means she'll have a lot more in common with her daughter and granddaughter in the revival.

In fact, the sense of being at a crossroads in life and questioning what to do next seems like the overarching theme of A Year In The Life — and it may be the biggest departure from the original series aside from the new format. We watched Rory go through the rites of passage of a typical overachiever — high school, college, and then setting off into the workforce. She had a few setbacks (like, you know, stealing a yacht and briefly dropping out of Yale), but she always bounced back remarkably quickly. This time around, she seems directionless in a way that's genuinely realistic and relatable to many young women — regardless of where we went to school or what career path we chose.

Meanwhile, Lorelai seems to be in a questioning phase as well. She unconvincingly tells a therapist that she thinks she and Luke are happy but later admits that she, too, feels lost. Although her trajectory wasn't quite as straightforward as Rory's in the original series, she based many of her decisions on what would be best for her daughter — so it was predictable in that manner. A child finishing college and entering the "real world" is a major life change (according to my own mother/BFF), so it's not surprising that Lorelai began to feel adrift after Rory left the state.

Although many key plot points have been kept under wraps, I think the revival will be way more unpredictable than the original series. Sure, it threw us some curveballs — but we always knew that Rory would get into an Ivy League school and land an amazing job, Lorelai would finally open her own inn, and Emily would be... Emily. With everyone at an impasse in their lives, the show can go in so many directions — and I think that gives it major, exciting potential.