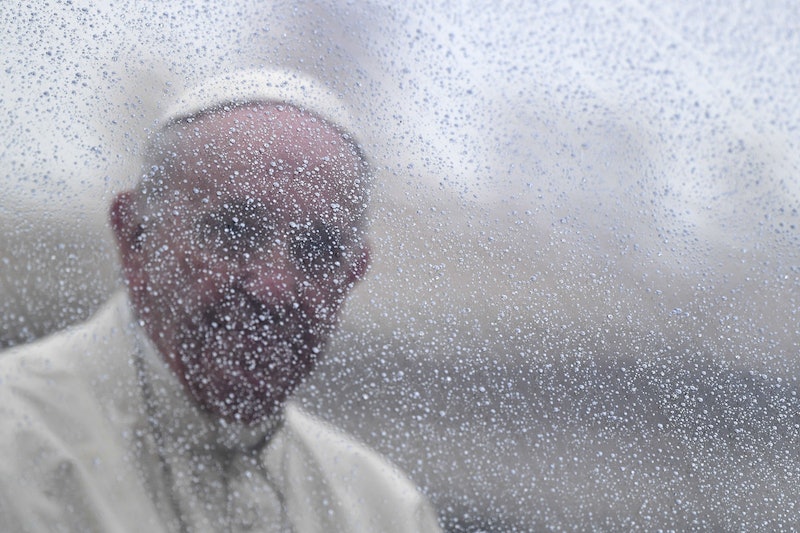 The Catholic Church is not known for evolving its stances on issues. Women still can't be priests, gay marriage is still not real, and abortion is definitely a no-no. This week, though, the Pope announced that priests can now forgive abortions. It's a small caveat in the church's stance that abortions are horrific and detestable. But don't get too excited by this pseudo-progress. The church will still condemn you for having an abortion, and they still think it's a really, really bad thing.

Previously, abortion was one of the few sins that could not be absolved, except with the approval of a bishop, and resulted in automatic excommunication from the church — meaning in the eyes of the Catholic Church, you could no longer participate in their religion. And the sin of abortion extends to all involved. So it's not just the woman who receives an abortion who sins, but also the doctor and nurses who perform the procedure.

Last December, with the start of the new Holy Year, Pope Francis declared that any priest could absolve the sin of abortion. This was part of a "Year of Mercy," which ended Sunday. In a letter published Monday, the Pope extended the conditions of the year indefinitely, so now all priests will retain the ability to absolve this sin.

He wrote that, "there is no sin that God's mercy cannot reach and wipe away when it finds a repentant heart seeking to be reconciled" with God. But also added, "I wish to restate as firmly as I can that abortion is a grave sin, since it puts an end to an innocent life."

But while some are pointing to this announcement as an indication of progress in the notoriously outdated and conservative institution, that's not really the case. Yes, now God will forgive you for having an abortion, says the Pope. But that forgiveness really exists in a vacuum, and that vacuum is Catholic woman's personal relationship with God. Women can take some solace in the fact that they have been absolved, which is good for those to whom that means something. Still, in everyday life, the Catholic Church is still going to condemn you for getting an abortion. They are still going to refer to it as a murder. They are still blaming you for your choice, no matter the situation that led to it.

So this announcement by the Pope doesn't do much to bring the Catholic Church into the 21st century. And this contradiction makes an already difficult situation even more confusing for Catholic women.