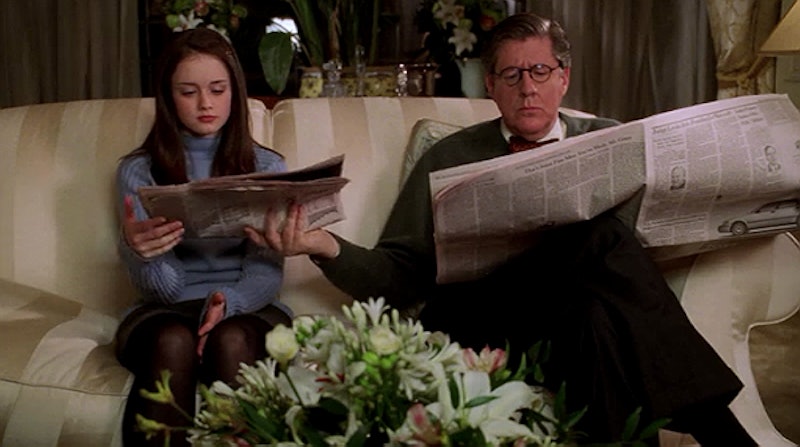 When I heard that Netflix was producing four more episodes of Gilmore Girls for Netflix, I was psyched. I think I’ve watched more hours of Gilmore Girls than possibly any other show on television besides Sex And The City, and I was ready for more. One thing that saddened me, though, was the fact that I knew Richard Gilmore wouldn't be around — Edward Herrmann, who played Richard, died in 2014 after a battle with brain cancer. Gilmore Girls: A Year In The Life couldn’t skip over his absence, and so instead the show decided to address it, head-on. How did Richard Gilmore die in the Gilmore Girls revival? SPOILERS for the Netflix series ahead.

As the show informs viewers, Richard Gilmore died of a massive heart attack, and by the time he got to the hospital and the doctors figured out what was going on, it was already too late. It was all very sudden, leaving Emily, Lorelai, and Rory reeling in its wake. It also makes Emily commission a very large painting by accident, but that's OK — it shows how imposing he really was. After all, making Richard’s death a part of the four-part revival was a must for the show. His presence was so large, and he was such the patriarch of the Gilmore family, that to not explain his passing or do him justice would be a real crime.

If you watched the original Gilmore Girls series, you’ll remember that Richard had a heart attack in Season 7 (and a bout of angina in Season 1, though it wasn't that serious). He was teaching a class at Yale (with Rory in attendance), and he suddenly gripped his chest and fell to the floor. Richard was in good spirits afterward, quipping that he’d “rather be in Philadelphia” than stuck in a hospital bed, and though there was a bout with a robe-and-bad-food-induced depression, he recovered quickly. No one — the Gilmore girls nor the fans — expected Richard’s death to actually happen, and that’s what makes the blow in Gilmore Girls: A Year In The Life so hard.

When Herrmann died, there was a lot of handwringing about how Gilmore Girls could continue in the wake of his death, and I think that creator Amy Sherman-Palladino did a wonderful job capturing the pain of the sudden departure of a loved one. All three Gilmore girls are adrift after Richard’s passing — Emily is without a husband, one she’s had for 50 years; Lorelai is without a father who, even though they had their differences, was one of the rocks in her life; and Rory is without her beloved grandfather, who was her sounding board, reading partner, and moral compass.

In a way, Richard’s death forces all three Gilmore ladies into a new chapter of their lives. Emily must learn to get on without the life partner she had for half a decade. Lorelai is forced to look at the relationships in her life to figure out if what she has is what she wants. Rory must do the same, in a way, except she has to decide where she belongs first — does she want to continue this “rootless existence,” as Emily calls it, or does she want to settle into the next chapter? Richard’s heart attack, tragic as it was, has changed Rory, Lorelai, and Emily, and it’s so interesting to watch whether it's a change for the better or not.