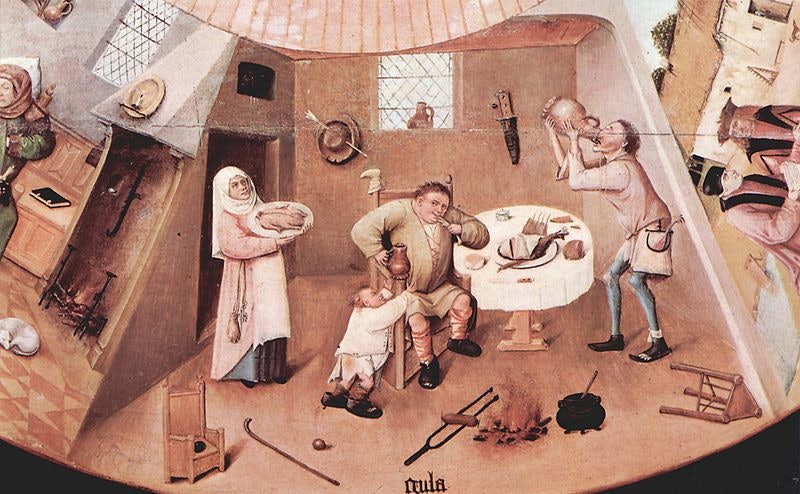 It's Thanksgiving, the time of year when eating until you feel stuffed is the reason for the season. Let's be honest: odds are incredibly high that you will end Thursday groaning on the couch with your trousers unbuttoned, along with much of the rest of the country. Battling stomach trouble is, however, hardly a modern ailment; everybody from the Egyptians to the Greeks and medieval Europeans had opinions about how to take care of stomach troubles, including cures for the after-effects that involved everything from magical amulets to placing a baby on your stomach to consuming fried cockroaches as a stomach-soothing measure (that last image probably isn't doing much for your stomach right now, huh?).

Of course, we have made great scientific strides forward since the days when some people thought the best cure for chronic indigestion was a trip to Switzerland; however, that doesn't mean that all of these ideas are just pure historical silliness. For instance, scientists have found some truth to the historical idea that people are more prone to digestive problems during very warm weather. And as for the cockroach thing... well, you are just going to have to keep reading in order to find out about that one.

Amulets Could Cure A Stomach Ache

The ancient Egyptians had a practical cure for potential indigestion: amulets. Quite a lot of Egyptian medicine was based on preventative or helpful jewellery, and indigestion was no exception; people would wear amulets around their necks that rested against their abdomens, often inscribed with messages like "Digest Digest Digest" or"God bids bowels breed no banes!" (Try saying that five times fast.)

There were specific animals associated with aiding those who were prone to indigestion, too. Waterfowl who were prone to eating scorpions, snakes and other problematic animals were usually the ones who were evoked on digestive amulets — for the good reason that they clearly ate a lot of nasty stuff and had an extensive appetite, making them good protectors for those with more delicate systems.

Indigestion Was Caused By Consuming Too Many Flavors

The Roman physician Pliny the Elder voiced some interesting perspectives on the possible causes of indigestion, some of which were sensible ("all acrid elements are difficult of digestion, and the same is the case if food is devoured greedily, or in too large quantities"), and some a bit less obviously so. He blamed indigestion on consuming "too many" flavors, on being too old, and, most notably, on the time of year: "Food is also less easily digested in summer than in winter." Interestingly, he may have been right on the money on this last one, as a study from 2013 noted that very hot weather tends to coincide with more incidents of gastrointestinal distress and disease.

Babies, Leeches, Puppies, And Tar Might Make You Feel Better After You Feel Uncomfortably Full

Want to go medieval in your cure for stomach aches? A good source is the Regimen sanitation Salernitanum, otherwise known as the Lilium medicinae or "Lily of medicine," a text from the 12th or 13th century that was first translated into English in 1608. It's a kind of verse guide to diet and medicine, and its ideas about curing stomach discomfort are pretty comprehensive.

It's based on the idea of humoral theory, in which human health is dictated by the balance of four humors (blood, phlegm, black bile and yellow bile) within the body, which influence its heat, moisture and other factors. If a person with indigestion is "cold," the Lilium suggests placing leeches directly on the stomach; if they're "cold and dry," somebody should rub a mixture of wax, oil and naval pitch on their abdomen; and if they're "cold and wet," they should drink something involving "wine from the Black Sea." The Lilium also makes the practical recommendation that "the digestive virtue is greatly strengthened" if small boys or girls are placed on the stomach, but that if you don't have any around, a puppy will do just as well.

Prone to indigestion? The 19th century had you covered; it suggested walking tours. No, really. Chamber's Encyclopedia, a book of general knowledge produced in the 1850s, had a variety of good suggestions about battling chronic indigestion (the benefit of going to watering-places, it suggested, "is due perhaps not so much to any specific action of the water, as to well-regulated diet"), but its ideas for getting a proper cure were kind of elitist. "A six weeks' or two months' tour of Scotland or Switzerland," it opined, will "often do a dyspeptic patient more good than he could have experienced from any amount of physicking at home."

That's all very well and good if you could wander off to Switzerland as you pleased, but what if you couldn't? Another collection of 19th century wisdom recommended strong walks, "a mile or two before breakfast," followed by a cup of spring water, and then another mile, for six weeks. Perhaps not so useful for people who had to actually, you know, work rather than striding around the countryside.

A man collecting folk history and remedies in the 1850s in Lousiana found that there was a precedent for a distinctly disgusting-sounding concoction for a troublesome stomach: "cockroaches fried in oil with garlic." Interestingly, though, this doesn't seem to have just been part of American folk medicine. It's popped up elsewhere too, across Europe, where boiled or fried cockroaches are part of cures, some of which are still known in the modern world. And the BBC reported in 2015 that some Chinese hospitals are likely to dispense a syrup made of cockroaches for severe cases of gastrointestinal distress. New and exciting appetizer this Thanksgiving, anybody?