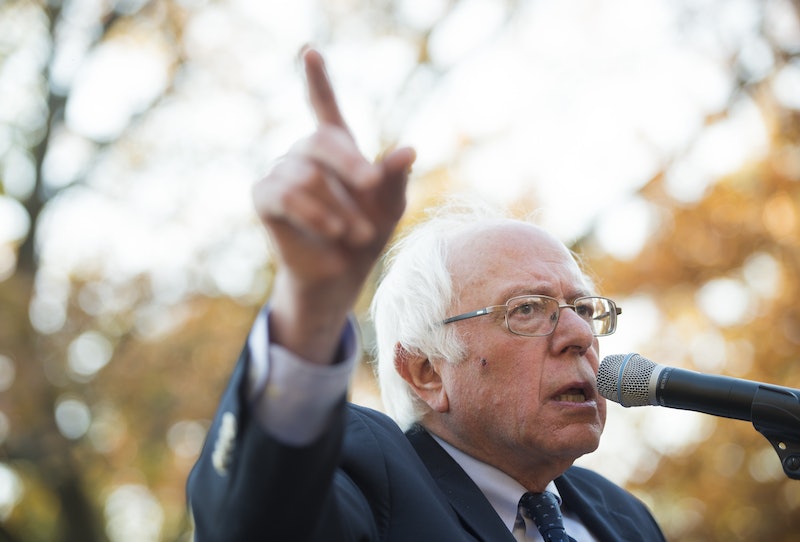 Speaking at an event on Sunday, Vermont senator and former Democratic presidential hopeful Bernie Sanders urged supporters to ditch “identity politics” and embrace working-class politics. The plea in and of itself implies the two things are inherently contradictory. “It is not good enough for somebody to say, ‘I’m a woman, vote for me.’ That is not good enough,” Sanders said at Berklee Performance Center in Boston. “What we need is a woman who has the guts to stand up to Wall Street, to the insurance companies, to the drug companies, to the fossil fuel industries.”

There’s plenty to take issue with here — I want to discuss the dismissiveness with which Sanders treats the importance of electing our first woman president in a second — but the heartbreaking either/or presentation of economic and identity politics makes me despair for the future of liberalism in this country. Trying to distance liberalism from identity politics simply because it failed to be a winning message for the 2016 election is like firing Stephen Curry from the Golden State Warriors because they lost a single game.

The truth of the matter is this: Not only are liberal politics concerning identity and economics not mutually exclusive, but they’re inextricably interwoven. Trying to pursue one without the other will not lead to meaningful change.

I believe that the Democratic Party — insofar as it is the party of liberalism in current American politics — gets much of its strength from being on the right side of identity politics and economic politics. For instance, the major shift of African-American voters from the Republican Party (back when it was the party of Lincoln) to the Democratic Party took place largely in two shifts: after Franklin Roosevelt’s New Deal and Lyndon B. Johnson’s signing of the Civil Rights and Voting Rights Acts. To say that identity politics have somehow done a disservice to the Democratic Party is extremely short-sighted.

What’s most dismaying about this rhetoric from Sanders is that it diminishes the very real ways in which gender inequalities — like, say, the gender pay gap — continue to hurt the working class. Moreover, it ignores the extent to which electing our first woman president would have been one of the biggest anti-establishment moves we as an electorate could have taken. (Instead, we elected… a white man who has said horrible things about women, undocumented immigrants, and host of other groups?)

In the end, the future success of the American left will be not whether they can find the one choice issue that will resonate with voters, but whether they can create a comprehensive view of our country’s future and effectively communicate it to the various segments of American society. That they failed to reach white working-class voters in 2016 was a fatal error, but I believe that giving up on the rest of their base would be apocalyptic.