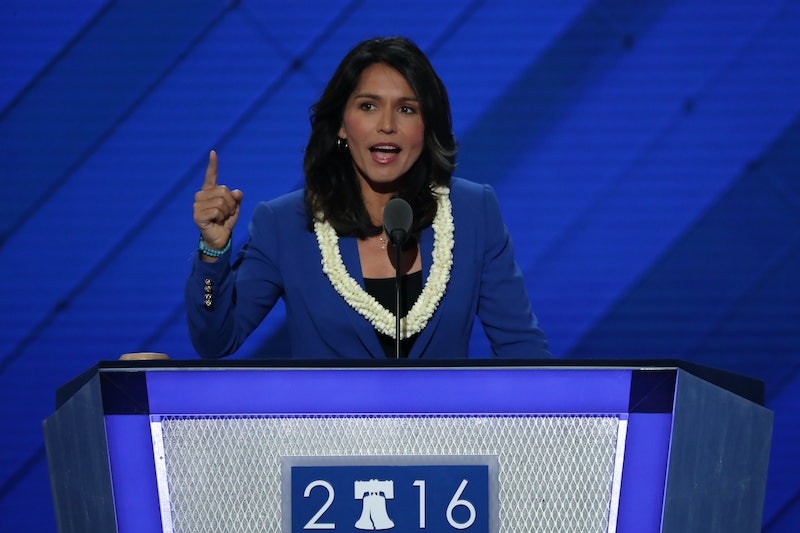 Donald Trump has spent his first two weeks as president-elect announcing his picks for key Cabinet positions within his coming administration. As he approaches choices for economic and national security positions, Trump met with Hawaii Rep. Tulsi Gabbard Monday morning. On the surface, Gabbard would be an interesting choice, either as a Cabinet member or an unofficial advisor. She was one of Sen. Bernie Sanders' most vocal supporters during the primaries. But there are a few reasons Trump might consider Gabbard for a role in his administration.

It is unclear whether Trump is considering Gabbard for a Cabinet position or as someone from whom to seek counsel, but given her foreign policy experience and positions, either role is feasible. CNN reported that a source said that Gabbard is under consideration for potential positions in the Defense Department, State Department and the United Nations. However, Trump spokesman Jason Miller, would not affirm or deny whether Gabbard is being considered for a position in the Trump administration. “She obviously has a very distinguished track record. But it would be a little premature to start putting out specific potential administration positions,” he said of Gabbard on a call with reporters.

Like Trump, Gabbard, who resigned from her vice-chair position with the Democratic National Committee in order to endorse Sen. Bernie Sanders, doesn't always toe her party's line. After the terror attacks in Paris in November 2015, she was one of 47 House Democrats to help pass a Republican-led bill to add additional background check requirements onto the already stringent screening process refugees from Iraq and Syria must go through to gain admittance to the United States. She also believes that U.S. intervention in Syria is overreaching by seeking to effect regime change in the country rather than focusing on ISIS.

Trump was highly critical of regime change efforts led by the United States throughout his campaign. And though his proposal to ban refugees from certain countries goes far beyond what Gabbard endorsed by supporting the background check bill, her openness to greater restrictions on access puts her closer to Trump's position than most Democrats. In addition to refugee and intervention issues, Gabbard is a vocal opponent of the Trans-Pacific Partnership, as is Trump.

Gabbard has been a representative for Hawaii since 2012. She's on the House Armed Services and Foreign Affairs committees. Much of her foreign policy cred comes from the fact that she's a combat veteran, having served two terms in Iraq.

So far, Trump's Cabinet picks have included lobbyists, establishment Republicans like Reince Priebus, and alleged white nationalist Steve Bannon (a descriptor Bannon has denied). As a Democrat and endorser of Sanders, Gabbard would be a marked departure from Trump's other selections. It remains to be seen whether she will be offered a Cabinet position or an advisory role, but the fact that they are meeting at this critical time in the administration's formation is significant.