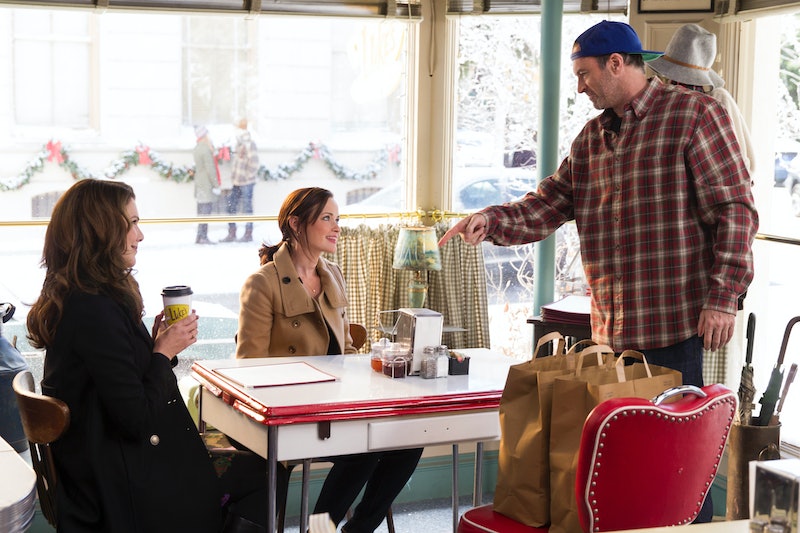 When you settle in to watch the Gilmore Girls revival on Netflix, you will happily discover that the new episodes seemlessly take you back to the bustling, quirkly world of Stars Hollow. However, not only has time passed since fans last saw Lorelai, Rory, and Emily — but the show is not exactly the same this time around. I've compiled all of the differences between Gilmore Girls: A Year In The Life and the original series, listed by episode. Naturally, I will be getting into Gilmore Girls spoiler territory, but you can easily stop yourself before you get to whichever episode you've reached in your marathon.

Of course, one of the biggest differences is the loss of the late Edward Herrmann, who played Richard Gilmore. Rory's grandfather was a huge presence on the series, and A Year In The Life addresses his death almost instantly. Another Captain Obvious-esque difference is that since the show is on Netflix now, there are no commercial breaks. This may seem like a small thing, but most TV writers use those commercial breaks to form episodes of television into acts, like an intermission in theatre. That changes the structure and pacing of the story a bit.

As for smaller details, here's what stuck out to me in Gilmore Girls: A Year In The Life as different from the Gilmore Girls we've known and loved for the past nine y.

First of all, the biggest change in the Gilmore Girls revival is the lack of opening credits. That said, you get used to it and back in the swing of things pretty quick. Another difference that continues for the whole series is that since these 90 minute episodes span a whole season of the year, scenes jump forward pretty suddenly. One minute, Rory has just arrived in London. In the very next scene, she's walking into Luke's Diner.

Speaking of the diner, smart phones have appeared in the nine years that passed since Season 7. Not only does that change character interaction, but it has forced Luke to add both new rules to the wall and deal with customers asking for the wifi password.

Mr. Kim! He exists! There's also the implication in this episode that Michel doesn't live in Stars Hollow, as he's not listed as someone who could participate in a gay pride event (after the revival has established that he has a husband). Though it's a small detail, I always assumed that all of Lorelai's coworkers lived in the town too.

Another big difference is that Tristan, who is briefly seen, is played by another actor instead of Chad Michael Murray. Sookie's not in the first two episodes either, which is certainly different.