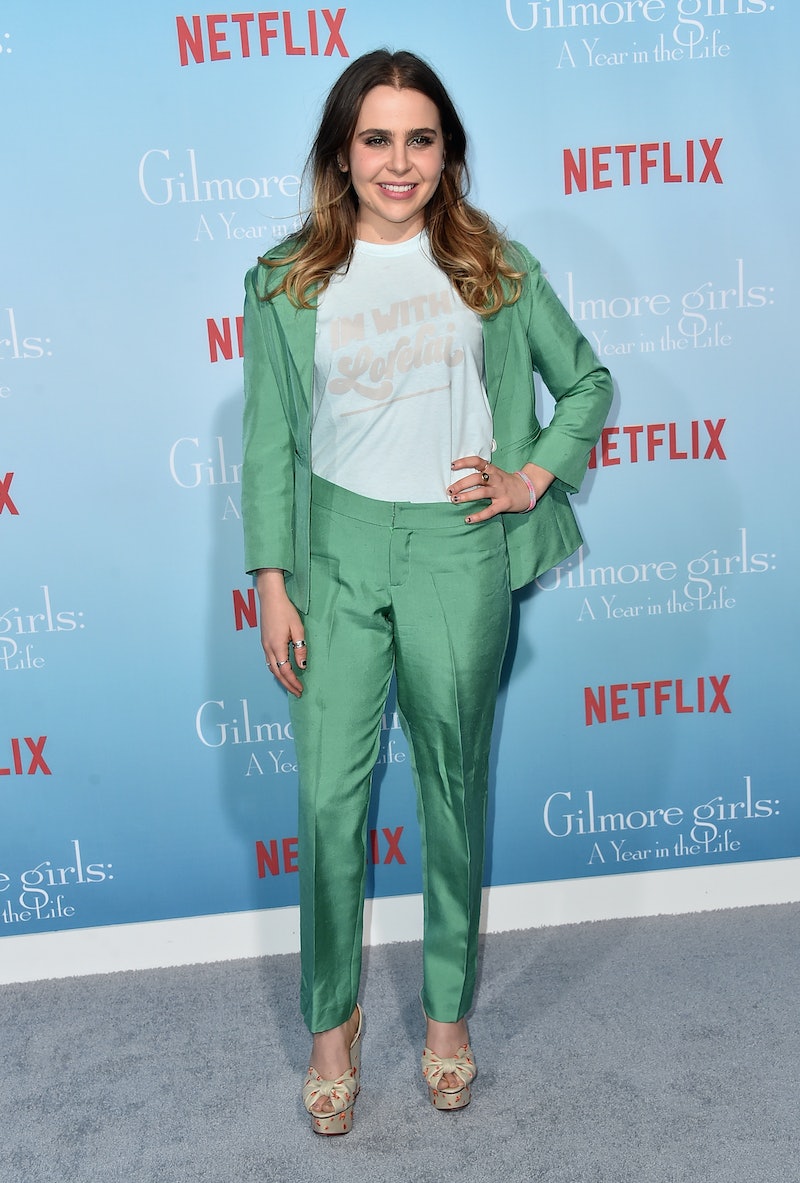 This former Parenthood star is just as big of a Gilmore Girls fan as you are. While attending the world premiere of the Netflix revival series on Friday, Nov. 18, Mae Whitman freaked out over Gilmore Girls directly to TVLine and it's something that will truly speak to every die-hard fan out there. If you can't tell by her "I'm With Lorelai" shirt, yes, Whitman really, really, really loves the dramedy revolving around Lorelai and Rory Gilmore.

"I don't know, should I start crying? No, right? I shouldn't. No, that's a bad look," she said after being asked what it felt like to be at the premiere as a fan. "I’m f*cking freaking out. I'm so excited. I saw everybody. I was like, 'Amy [Sherman-Palladino], look, I'm wearing an I'm With Lorelai shirt. Do you think I'm cool now? Yeah, Amy. Amy?' You know, I’m trying to act with some composure so I don’t get arrested here. I'd like to not get arrested."

Yeah, that sounds like a typical response for someone who adores GG wholeheartedly. Really, Whitman is living out every fan's dream, because she actually filmed a cameo for Gilmore Girls: A Year in the Life. What makes her short part that much more amazing is it is alongside Lauren Graham, aka Whitman's TV mom when they both starred in Parenthood. As TVLine reported in March about her role, "She shares a really fun (albeit small) moment with Graham that will delight Parenthood fans."

The fact that she is featured in an episode makes the 28-year-old actor even more ecstatic. "I'm still just as excited," she gushed. "I feel slightly more legit. Netflix sent me my own invitation." She added, "That felt good that they took my one and a half second cameo where I was barfing my guts out seriously."

To be clear, it seems that Whitman doesn't actually barf on screen. As TVLine's Michael Ausiello explained, "Fun fact: Whitman and I shot our cameos on the same day, and I can confirm what she says in the above video is true — she was a mess the day of filming. But it was a stomach bug, not her Gilmore fanaticism, that felled her."

I mean, if I scored a role on the best series ever and was sick, I would still totally do it. That's what dedicated Gilmore Girls fans are here for, right? Now, how can I get a hold of Whitman, so we can watch the revival together?

More like this
Here’s What Happens To Bill & Frank In 'The Last Of Us' Video Game
By Brad Witter
The Banned 'Friends' Ad Shows Monica As You’ve Never Seen Her Before
By Sam Ramsden
Ashton Kutcher Wants Danny Masterson “To Be Found Innocent” In Rape Retrial
By Jake Viswanath
'Abbott Elementary' Fans Probably Missed This 'Parent Trap' Easter Egg
By Sam Ramsden
Get Even More From Bustle — Sign Up For The Newsletter
From hair trends to relationship advice, our daily newsletter has everything you need to sound like a person who’s on TikTok, even if you aren’t.