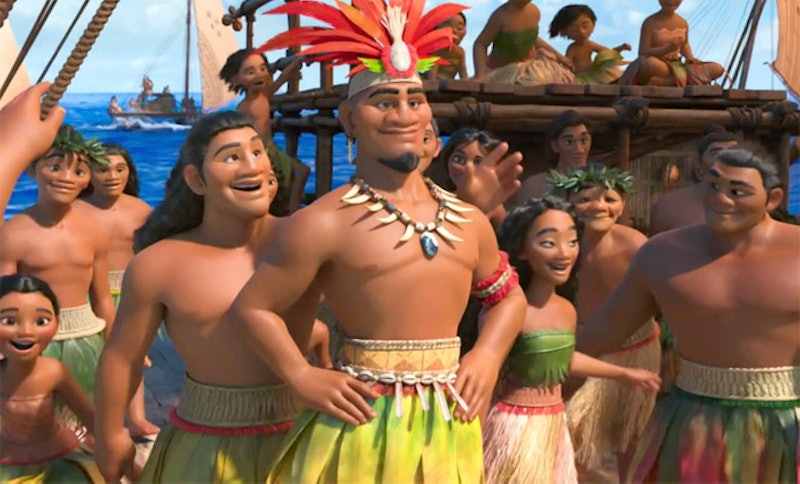 Disney's newest animated adventure, Moana, is already making a name for itself in a number of different ways. The film's animation is perhaps the most stunningly beautiful the studio has ever put out, the lead character is the first Disney princess without so much of a whisper of a love interest, and the film's music is some of the greatest to come from the Mouse House in years. One song in particular that's getting a lot of attention is "We Know the Way," which was written by Mark Mancina, Lin Manuel Miranda, and Opetaia Foa‘i. But due to the Polynesian setting, only half of the song is in English. The translation of "We Know the Way" from Moana, though, is truly fitting for the film.

It's hard to say, exactly. As far as I can tell, the non-English lyrics of the standout Moana song are in the Tokelauan language. This is the native language of Foa'i, who is the lead singer/songwriter for the group Te Vaka, and most of their songs are performed in this language as well. Tokelauan comes from the tiny South Pacific island nation of Tokelau, which is a territory of New Zealand. According to Ethnologue, there are only about 3,000 people in the world who speak the language, meaning that online translations are basically impossible to find.

However, the language does share some similarities with other Polynesian languages in the area, most notably Samoan, and to a lesser extent, Maori. By plugging the lyrics into Google Translate for both of these respective languages, one can get a pretty good idea of what the song is about. Here are the lyrics in their original Tokelauan form:

Now, here are those lyrics as translated from Samoan:

Clearly, it's not a perfect translation. Here are the same lyrics as translated from Maori:

Welp, that doesn't help much either. However, if you put the two together, the song starts to make sense. The first stanza seems to be talking about explorers traveling with the help of the Ocean God.

The second stanza seems to indicate that they will be aided in their journey by the birds, the Earth, and their family. And when you look at the lyrics of the song that are already in English, this does seem to line up pretty well:

We read the wind and the sky when the sun is highWe sail the length of the seas on the ocean breezeAt night, we name every starWe know where we areWe know who we are, who we areAue, aueWe set a course to findA brand new Island everywhere we roamAue, aueWe keep our Island in our mindAnd when it's time to find homeWe know the wayAue, aueWe are explorers reading every signWe tell the stories of our elders in a never-ending chainAue, aue

One word that's giving me a lot of trouble is "aue," which is sung throughout the song. In Samoan, the word can mean "alas" and "et cetera," while in Maori it means both "woe" and "howl" or "cry." If I had to guess, I would say that "alas" probably makes the most sense within the context of the song.

Translating "We Know the Way" is no easy feat, but the Tokelauan lyrics seem to exhibit the same spirit of adventure as do the song's English lyrics.

More like this
The 'Love, Lizzo' Harry Styles Scene Is Just 1 Moment That Made Fans Feel Seen
By Brad Witter
Jennifer Lopez Shares Rare Holiday Photos Of Ben Affleck & Her Twins
By Radhika Menon
Billie Eilish Has An Exciting Relationship Update About Her Boyfriend
By Grace Wehniainen
Selena Gomez & Blackpink's Post-Show Meetup Left Fans Thirsty For More
By Stephanie Topacio Long
Get Even More From Bustle — Sign Up For The Newsletter