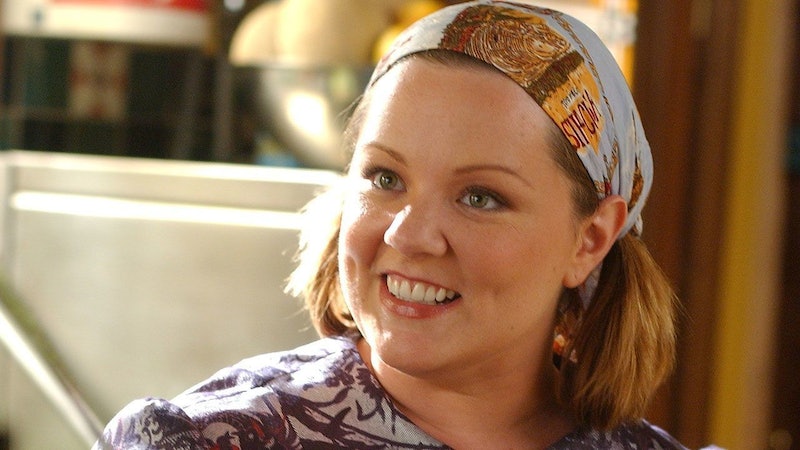 When news of the Gilmore Girls revival broke, I bet most fans were super excited to get the whole cast back together. Gilmore Girls was a show about Lorelai and Rory, yeah, but the ensemble cast was really what made the series work. It was probably easy to get most of the characters back together, with one big wrench in the plan — Sookie St. James. Melissa McCarthy is a bonafide movie star now, so she doesn’t have the free schedule to film the entire Gilmore Girls: A Year In The Life revival. Totally understandable! But creator Amy Sherman-Palladino thought of a very Sookie way to explain her absence. [SPOILERS AHEAD] Where is Sookie in the Gilmore Girls Netflix revival? Saving the future of agriculture as we know it.

As viewers saw in the first episode, Sookie isn’t at the Dragonfly Inn right now — instead, a whole bunch of famous chefs have been cooking at scheduled pop-ups in the Dragonfly kitchen. Roy Choi, Rachael Ray, April Bloomfield, and David Chang have all been behind the very expensive stove that Sookie chose for her kitchen, much to Lorelai’s chagrin. Lorelai would rather have her friend and business partner cooking up a storm instead. But no — as the revival reveals, Sookie is working with real famed chef and food educator Dan Barber at his Blue Hill Farm in upstate New York to cultivate new breeds of fruits and vegetables for the world to eat.

Barber is a big proponent of farm-to-table cooking, and he maintains that people should not only know where their food is coming from, but also how it is prepared and that as little waste as possible should be produced. According to his bio, Barber's “opinions about food and agricultural policy have appeared in the New York Times, along with many other publications.” President Barack Obama appointed him to serve on the President’s Council on Physical Fitness, Sports, and Nutrition, and he’s also on the board of directors of the Stone Barns Center for Food and Agriculture. Oh, yeah — Barber has multiple James Beard Awards and was named one of Time’s most influential people in the world. Suffice it to say that Sookie is in really good company if she’s hanging out with Dan Barber.

Props to Sherman-Palladino for this Sookie story, because it’s so Sookie! For seven years, we watched her fight with Jackson to get the best produce possible, and now Sookie is responsible for making better vegetables for the rest of the world. She’s very busy shaping the agricultural future of the United States, so I totally understand why she can’t have a full-time cooking job at the Dragonfly Inn right about now.

According to TVLine, McCarthy basically only had one afternoon to film Gilmore Girls: A Year In The Life , and I’m glad she was able to be a part of it. Gilmore Girls was a big part of the beginning of McCarthy’s career, and it’s nice to see that she had a chance to go back to her roots. Hopefully, Sookie will return to her custom kitchen at the Dragonfly Inn in no time.

More like this
24 Years Ago, 'Friends' Dropped Its Most Underrated Ross & Rachel Episode
By Grace Wehniainen
Netflix Reveals First Look At Wednesday In The 'Addams Family' Spinoff Series
By Bustle Editors
What Does Nancy Jo Sales Think Of 'The Real Bling Ring'?
By The Editors
'Survivor' Is Finally Coming Back To UK Screens
By El Hunt
Get Even More From Bustle — Sign Up For The Newsletter