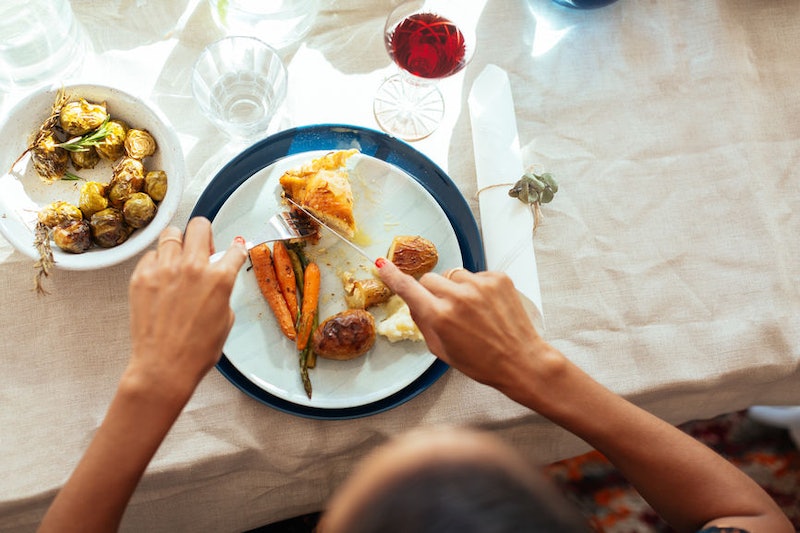 There's no escaping it. The holiday season is upon us, and with it comes the requisite "family time." While this time of year is often stressful for many of us — between the travel, the rush to find the perfect gift, and trying to make an appearance at all those holiday parties — this particular season of light might feel a bit dark and gloomy for those of us still coming to terms with our impending reality under president-elect Donald Trump. As the working world coasts through this half-week in the office, several outlets have published tips for surviving long holiday meals with distant relatives you barely see — and with whom you definitely don't see eye-to-eye. While there's no shame in sticking to polite conversation, excusing yourself to help with dishes, or just staying home to Netflix and chill this Turkey Day, if you're feeling courageous, there are some constructive ways to engage your family in the wake of the election.

Showing Up for Racial Justice (SURJ) is a national network of groups and activists "organizing white people for racial justice," according to the nonprofit's website. The group is specifically designed to help white folks find points of entry to discuss racial justice with other white people, and strives to work in partnership with and maintain accountability to groups led by people of color and other marginalized communities.

Since white Americans were the only demographic that Trump carried during the election, odds are that if you're a white person who's spending time with other white family members this holiday, some of them might have voted for Trump. If you're willing to engage with Uncle Joe or Cousin Patty or Grandpa Melvin or anyone else who is excited to "Make America Great Again" during the holidays, SURJ has a Thanksgiving toolkit for how to talk to your relatives about Trump. It's even available via text!

The full toolkit can be downloaded here, complete with discussion topics, de-escalation techniques, and simple, direct action items that you can encourage family members to take before the tryptophan sets in. There's even a suggestion for art projects to engage the kids in the family, including creating postcards opposing the Dakota Access Pipeline to send to North Dakota Gov. Jack Dalrymple.

Speaking of #NoDAPL, Thanksgiving is undoubtedly an opportune moment to reflect on the ongoing violations against Native Americans across the country, but especially at the Standing Rock Sioux Reservation in North Dakota. The standoff at Standing Rock is a heady mixture of racism and capitalism trumping likely environmental disaster, and falls squarely inside this country's long history of trampling the rights of First Nations peoples. The water protectors at Standing Rock are calling for a national week of action, beginning the Friday after Thanksgiving, where supporters close their accounts at major banks that are funding the pipeline, and demand those banks and police departments supporting the pipeline divest from the project.

Of course, Thanksgiving is a time to express gratitude for the good things in our lives, but it's also a holiday that has its roots firmly planted in the colonization and subjugation of Native Americans — abuses that continue to this day. If you feel able to engage with your family about this complex history, SURJ has a list of conversation starters that acknowledge the racial tensions that lie beneath the traditional "First Thanksgiving" narrative.

Throughout its Thanksgiving Toolkit, SURJ's conversation starters take a non-confrontational tone. The toolkit offers concrete examples of what to say to relatives on the other side of the aisle, basing those interactions off whatever feelings you might be having about the election. By doing this, the discussion can remain more intimate and directly related to how you, as an individual, are responding to the election — which makes it harder for others to dismiss your concerns out of hand as part of some universal "overreaction" from a bunch of "sore losers."

In helping your family understand why these particular issues matter to you — like the movement for Black lives, the fight to defend the sacred at Standing Rock, or the efforts to thwart Trump's promised "deportation force" — you can help to soften some of the divisive rhetoric that's all too common in this post-election environment. SURJ actively supports "calling in" rather than "calling out" problematic statements, which means you can count on the Thanksgiving toolkit to be a device to help foster conversation, not division.

Public Service Announcement: If you're a white person who has been wondering how you can stand in solidarity with those directly targeted by Trump's campaign promises, find your local SURJ chapter and attend one of the introductory meetings. You'll get a good idea of the social justice framework SURJ uses, and may be surprised to find you have more allies in your area than you expected. It's a small, concrete step you can take today to start resisting hate in Trump's America.