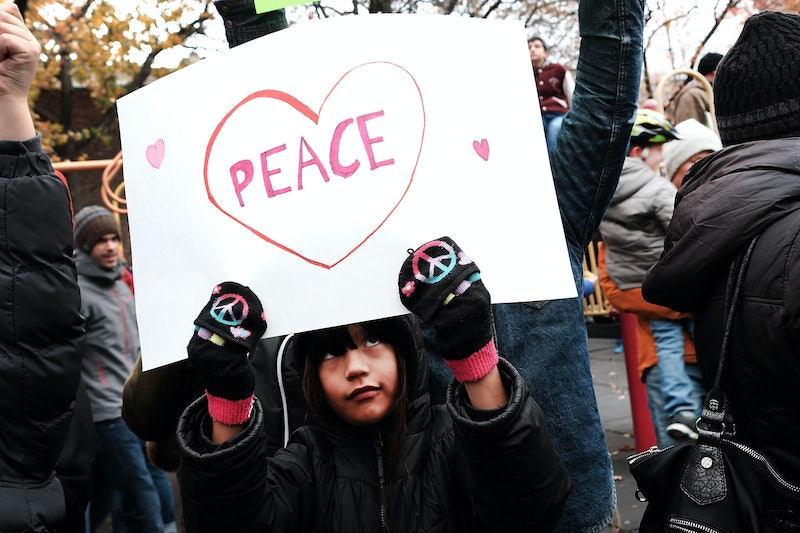 After someone vandalized a children's playground in Brooklyn Heights with spray-painted swastikas and a pro-Donald Trump statement, countless children replaced the graffiti with messages promoting love and peace. This is a perfect example of a community coming together to battle bigotry.

Adam Yauch Park, named for the Beastie Boys founder who passed away in 2012 and who had Jewish ancestry, was filled with thousands of New York City residents on Nov. 20 for an anti-hate rally. The official Beastie Boys Twitter account shared the event information and encouraged their supporters to join them, stating that "hate has no place in Brooklyn, NYC, or America." Several local and state politicians, such as State Sen. Daniel Squadron and Rep. Nydia Velázquez, also attended the protest.

The kids at the event covered up the graffiti with flowers and paper hearts. They also spread their messages of positivity to the sidewalks and the rubber mats near the vandalized equipment, writing things like, "Hate is bad," "Pre-Schoolers 4 Peace," "Don't say mean things to people," and "In my park?" Hillary Clinton's campaign slogan "Love Trumps Hate" was one of the more common statements seen on signs, shirts, and sidewalk chalk messages.

Check out some of the inspiring scenes from Sunday's rally:

This is what a children's playground should look like.

This Is Just Too Inspiring

They really gave the site a great makeover.

It's not just the specific group of people who are targeted by a hate crime who suffer the consequences — it puts all other marginalized groups in danger and it breeds a toxic, fear-based society.

This boy's sign quotes the Beastie Boys song "Intergalactic," and its message of persisting and fighting to change the world is quite fitting for the occasion.

To Put It Simply

Beastie Boys member Adam Horovitz encouraged everyone attending to work from now on to make positive changes in any way they can. "This is more about someone in New York City linking Nazi Germany to Donald Trump in a 'hell yeah' kind of way in a park where children play," he said. "If you're able to volunteer, volunteer. ... If you're a musician, write that anthem. If you're a writer, write. Take what you're good at, and what you truly enjoy, and lend your services to the causes you care most about. 'Cause we can't, and we won't, and we don't stop."

The way the kids of Brooklyn Heights took back their park is a great example of what Horovitz meant.