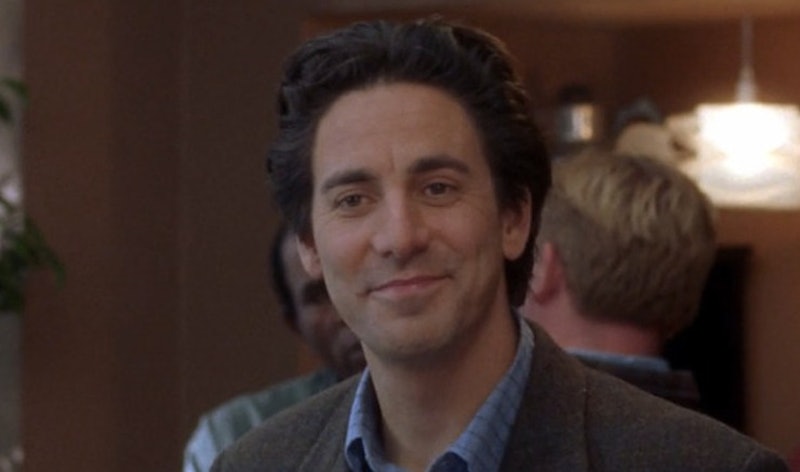 On Friday, Nov. 25, Gilmore Girls fans will get a new ending to the series that first stole their hearts 16 years ago. The series revival has sparked rampant debate around which ex-boyfriend — if any — Rory will end up with, as all three of her former flames are set to revisit Stars Hollow. But will Lorelai have the same kind of closure? Fans may already know Luke (Scott Patterson) and Christopher (David Sutcliffe) are slated to appear, but will Max Medina return to Gilmore Girls?

For those that need a refresher, Max (Scott Cohen) popped up early on in Season 1. He was Rory’s English teacher at Chilton, but quickly kindled a relationship with Lorelai, and the two eventually got engaged. Lorelai left him just before their wedding, instead dragging Rory out of bed for an impromptu, middle-of-the-night road trip. She ran into him a handful of times afterward, but they ultimately went their separate ways. He was last seen in Season 3, when he quite firmly told Lorelai to stay away from him after a grad party committee meeting at Chilton.

Given his lengthy absence, it’s not surprising that creator Amy Sherman-Palladino couldn’t find a way to fit him into the reboot. By the time Gilmore Girls went off-air, Lorelai had long moved on, and the end to her Max chapter felt pretty concrete — there wasn’t much more to explore.

Sherman-Palladino already had a lot of lingering stories to cram into A Year In the Life’s limited episodes, which unfold over four 90-minute installments. After deciding how to tie up the lives of the central Gilmore women—Lorelai, Rory, and Emily—she was at a loss for where Max might come in, according to Entertainment Weekly. “One person I didn’t figure out how to get in was Scott Cohen, whom we love so much. Not that we’re not still thinking about him, but we couldn’t figure out how to get Max in there,” she told EW in April. “We had so much story. We left storylines on the cutting room floor before we started.”

Though it’s unfortunate we’ll see one less familiar face, Max being elsewhere is probably for the best. Season 7 featured plenty of heart-wrenching tension between Lorelai and Luke, and any new snag in their relationship will be hard enough to swallow. A visit from Lorelai’s onetime fiancé could derail any progress they’ve made in the decade since we last saw them. Plus, Max deserves a life outside of the heartache Lorelai put him through. Here’s to hoping he’s off living happily with a family of his own.